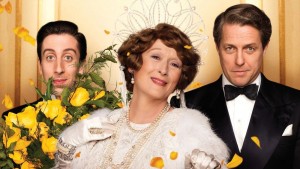 Meryl Streep is NOT overrated. She is the most accomplished actress of the last 50 years. She continues to amaze, in film after film, delivering one delicious performance after another. This one is no different. Based on the true life and story of Florence Foster Jenkins, a New York heiress and supporter of the musical arts, who became famous for her terrible operatic singing, Streep brings empathy, humor and heartbreak to a character that could have simply been played for laughs. 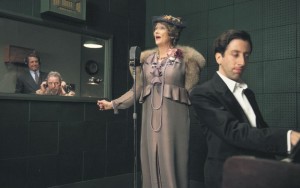 The film takes place in 1944 where Jenkins puts on fundraising shows though the Verdi Club, a group she put together to support and celebrate opera, which she was passionate about. Her husband, English Shakespearian actor, St. Clair Bayfield (Hugh Grant) assists her and dotes after her, making sure she gets what she wants while also shielding her from embarrassment. He hires a pianist, Cosme McMoon (Simon Helberg, Big Bang Theory) to assist with her voice lessons. He immediately is stunned by Jenkins awful singing but St. Clair pays him well to go along and keep quiet. 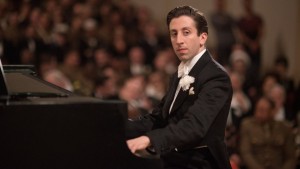 The problem arises when Florence decides to cut an album of her singing to give away as Christmas gifts to members of her Verdi Club. The album goes public and starts being played on the radio to the shock and dismay of St. Clair. Jenkins then gets an offer to sing at Carnegie Hall. St. Clair must work overtime to try and make his wife happy and protect her. He does his best but there’s only so much a man can do. 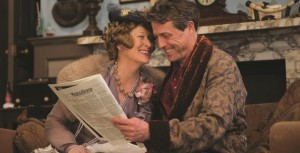 Though Jenkins and St. Clair were married they lived separately and were chaste. Jenkins had contracted syphilis on her wedding night at the age of 18 from her first husband. It was a miracle that she lived almost 60 years with the disease. St. Clair lived in a separate residence with his lover. It was an arrangement they had made. St. Clair seems to really have loved Florence and he looked after her thoughtfully. 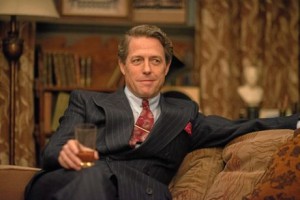 Hugh Grant doesn’t do many films these days but he is wonderful here. He is charming and real and you feel that he cares for both Florence and his lover Kathleen (Rebecca Ferguson, Girl On The Train). Simon Helberg is adorable as Cosme who becomes a part of this odd family and a trusted friend. 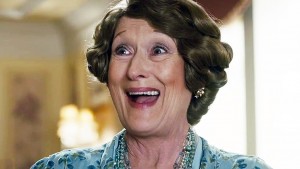 Streep, of course, is amazing. She actually has a very good voice but it’s a tribute to her acting skills that she sings very badly in this film. If you watch the closing credits you will hear Meryl Streep singing beautifully, a song called Valse Caressante.

There is a lot of humor, obviously, but there are also some very touching and heartfelt moments in Florence Foster Jenkins. A very entertaining film directed with energy and care by Stephen Frears (Dangerous Liaisons, High Fidelity, The Queen). 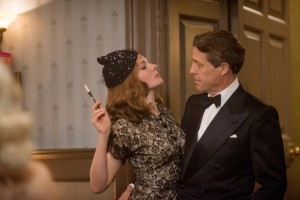