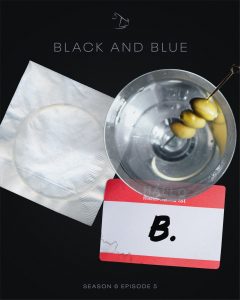 This is a Howard-centric episode! Howard and Cliff meet with some of the senior citizen plaintiffs of their Sandpiper civil suit. They are getting restless and wondering why the case is taking so long. Cliff’s able assistant, Erin, tries to explain it to them but it wasn’t working so Howard stepped in and charmed them! He looks to be on top of his game but Cliff noticed that Howard’s leg was moving restlessly. After the meeting Cliff confronts Howard about what he saw last week. Howard swears it wasn’t him that threw that prostitute from his car. Cliff urges him to get help and brings up his son who succumbed to a drug problem. Once Howard found out that it was Kim that Cliff was having lunch with when he saw the incident he immediately put it together. He doesn’t have a drug problem. He has a Jimmy McGill problem. Howard calls his secretary, “Cancel my week!”, he tells her. He is now laser focused on Jimmy. 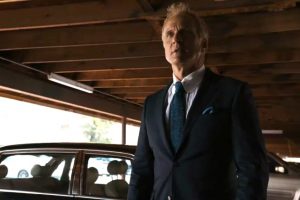 Meanwhile, a familiar face shows up at Jimmy’s new offices. Francesca has been called in to help as receptionist for the new Saul Goodman and Associates offices which consists of a fold up table, a chair and a toilet. She is understandably reluctant but Jimmy assures her that in two weeks she won’t recognize the place and he promises her more money than her current job. As we know, Francesca will stick with Saul until the bitter end. 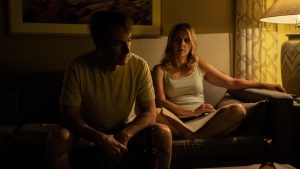 Kim can’t sleep. She lays awake and worries about Lalo coming for another visit. She gets up and checks the locks on the door. She adds a chair against the doorknob for good measure. Eventually Jimmy wakes up and sees the chair. He tries to reassure her that they are safe. ” I know the nuns back in Cicero would condemn me to hell for saying this but I’m glad he’s dead”. Kim almost looks like she is going to tell him but decides against it. What will the cost be for keeping that from Jimmy? 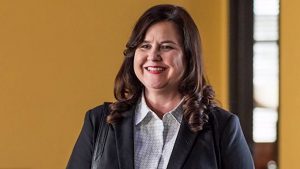 Francesca calls Jimmy and tells him that he needs to meet a Mr. ward concerning a job which leads Jimmy to an empty gym where a waiting Howard is there to greet him and offers to duke it out in the ring. 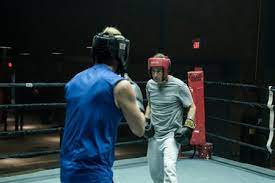 Jimmy laughs it off initially but ends up putting on the gloves and headgear and going mano a mano with Howard. Each gets their licks in but Howard gets the knockout. He hopes that will end their beef but he suspects it won’t. So he hires a private investigator to follow Jimmy. What will he uncover? 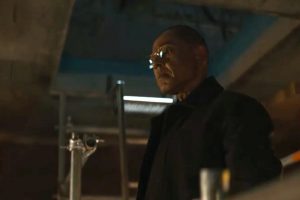 Gus has never been more unhinged. The usually cool and collected Gus is off his game. He has Lalo on his mind. Mike takes him to inspect how the new drug lab is coming along. He spends some quiet time looking around, inspecting everything. It was his form of meditating.

The cold open showed a plaque being made. A slide rule scale encased in glass and a saying underneath, “In Liebe…Deine Jungs”. This comes into play at the end. 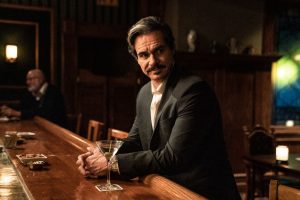 Lalo shows up in Germany! He’s well dressed in a bar where he meets a woman and begins a successful flirtation which leads to him walking her home. She resists inviting him in although its obvious she would like to but she has an early meeting. That old chestnut! Lalo is non plussed but the next day he returns to her house, watches her leave and then breaks in.

Who is this woman? The wife of Werner Ziegler, the man who designed and oversaw the construction of Gus’ underground meth lab. Lalo needs evidence that Gus is planning to make his own meth and distribute without letting the cartel know. He sees the plaque and the design of the meth lab. He’s got it! Then the woman returns to the house setting her dog off. She forgot her cell phone. The dog runs to the stairs and continues barking. She goes up the stairs to have a look. Lalo pulls out his gun and screws on a silencer. However, he decides to slip out the window instead. Perhaps he actually liked her a little.

“In Liebe…Deine Jungs” translate to “Love, your boys!” 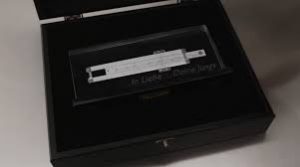 Kim meets with an ex-colleague from – working on the Sandpiper case and finds out who the judge will be and seems pleased. 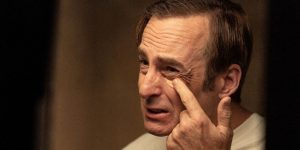 Jimmy comes home with a black eye and tries to use make up to cover it up since he has to be in court in the morning. Kim tells him to leave it. “I’m Saul Goodman! I’ll fight for you!” she says as she puts up her dukes.  Jimmy laughs. 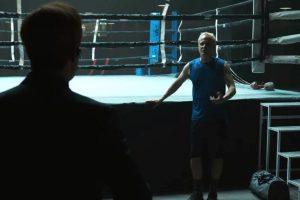 Is Howard a bad guy? I don’t think so.  But he’s not a good guy either. Both Jimmy and Kim have legitimate beefs with him. I understand why they are trying to bring him down but it still feels wrong. It felt wrong to Jimmy too but he is going along with it to please Kim. Tragedy will ensue.