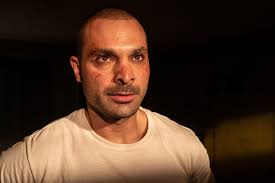 Nacho is indeed between a rack and a hard place and there are few options left. We all know how this is going to end.

The cold open shows an empty desert landscape, vegetation beginning to grow, even some beautiful blue flowers. It begins to rain and we see a large shard of broken glass, the rain washing the dirt away.

Nacho, still driving away from the motel with a shot out tire. He stops and readies for the Salamanca Brothers to show. He sees an abandoned oil tanker nearby and runs to hide in it. The brothers arrive and also see the tanker and go to investigate. Nacho submerges himself in the remaining oil while one of the brothers peeks. They ride off to continue the search.

Nacho waits until dark and then heads out. Where can he go? He runs across a garage and the garage owner hands him soap to wash himself using the hose, gives him something fry to wear. Nacho calls his dad. They have a very uncomfortable conversation. His dad’s voice filled with disappointment and sadness. Nacho knows there’s nothing left to do but make sure that no harm comes to his father. He calls Mike.

Nacho makes a deal with Gus. He’ll come in and say that he was behind Lalo’s assassination attempt and that Gus had nothing to do with it. His one condition is that no harm comes to his father. Gus agrees but Nacho wants to hear it form Mike. “Anyone who goes after him will have to go through me.” Mike says.

Mike sneaks Nacho back into the country and keeps him under wraps while they tell Bolsa, Hector and the brothers that they have Nacho and set up a meet. Nacho gets his last meal. Mike is instructed that Nacho looks too ‘pretty’ which means he has to rough him up a little for appearances. which Mike doesn’t like. The plan is Nacho takes responsibility for the assassination of Lalo, clears Gus and then takes off running which is when Victor will shoot him dead. A much better way to go than being tortured by the brothers. Nacho understands and is ready for a beat down but Mike brings out a bottle and two glasses. Mike respects him and sharing a drink with him shows that. 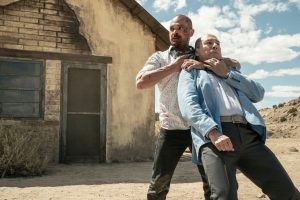 The next day they drive out to the middle of nowhere to hand Nacho over for ‘justice’. Mike insists on going and being nearby with a rifle in case things go bad. 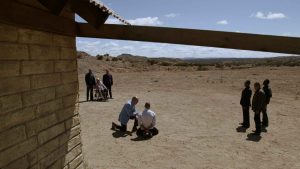 Gus, Victor, Tyrus and Nacho drive out in van to the meet. They drop off Mike before they get there. Mike and Nacho exchange a look. A look of respect and a goodbye. Mike sets up his rifle a safe distance away. The Salamanca clan await along with Bolsa. Gus hands over Nacho. Bolsa asks him who was behind the assassination. Nacho hesitates. Has he changed his mind? No, he says what he agreed to but he goes further. He admits that he put Hector in his wheelchair by switching his heart meds with sugar pills. He tells them all off then grabs Bolsa’s gun and holds it to Bolsa’s head. Mike seems to want Nacho to shoot Bolsa. He mutters “Do it”, and it seems that he would then shoot the others from his perch. But Nacho puts the gun to his own head and shoots. Nacho’s story comes to an end. Its interesting to note that every single character in this scene we know will be killed during the Breaking Bad timeline. 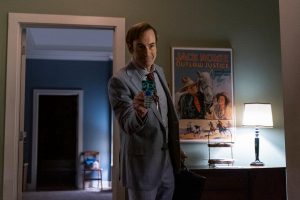 “I think the word you’re looking for is audacious”

Jimmy and Kim get ready for work and discuss the next stage in the plan to discredit Howard. They need to get a hold of his car. Jimmy says this is a job for Huell and suggests the ‘Valet Scam’. Kim says Howard has seen him before but JImmy says that the way Huell will do it Howard will never know. “He’ll be a ghost”. Kim says. “That’s pretty slick” and Jimmy, repeating what Kim said earlier in the scene, “I think the word you’re looking for is audacious.” Kim smiles. She looks at Jimmy and kisses him. They’re partners and the scheming seems to turn her on.

Huell manages to take Howard’s car keys from the valet who parked it and then has a guy in a van make an extra set of keys before the valet comes back to the garage to look for them. The kid is fast but the guy in the van is faster. Huell hands Jimmy the extra set of keys and then asks him a question. If he’s a legit lawyers and his wife is a legit lawyer and they make good money why is he doing all this extra scheming? Jimmy says that what he’s doing will do a lot of good to a lot of people and that they’re doing ‘God’s work’. I don’t know that Jimmy really believes that though. 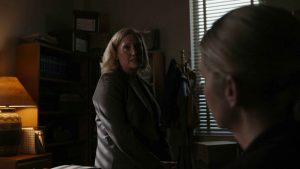 The DA grabs Kim at the courthouse and starts grilling her about Jimmy and his recent work for a drug cartel. She proposes that Jimmy testify about what he knows about the cartel, seeing as Lalo is presumed dead there would be no attorney-client privilege.  Kim doesn’t like it. She takes the message back to Jimmy and he asks her what he should do.

She sounds more and more like a mobster. Will she be the one to transform Jimmy into Saul by become Saul first? 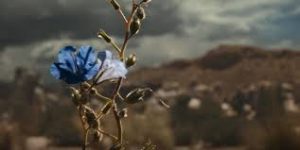 Back to the cold open. The blue flowers are growing where Nacho died. The shard of glass that he used to cut his handcuffs, lying on the ground beside them.