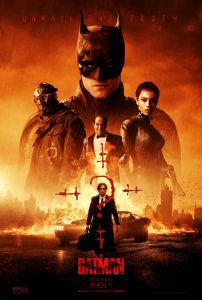 Another Batman movie? Did we really need one? No. Is this new Batman movie worth seeing? Yes! What I appreciated here is that we didn’t get another ‘origin’ film. This film starts off with Batman already Batman and two years into his existence. Batman and Gordon as already a working team and he appears to be accepted by the city and the cops as a known quantity though still a mysterious one.Matt Reeves has crafted a dark, complex Gotham that is more film noir than the previous iterations. It reminded me more of Seven (95) with the dark and shadowy photography and constant low hum of music underneath it all. The stink of cynicism and corruption permeates everything and The Batman is a joyless instrument of ‘vengeance’. 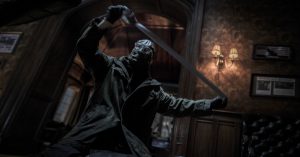 Prominent politicians are being murdered by some lunatic calling himself The Riddler (Paul Dano) who dresses like the survivor of the apocalypse and, in fact, he feels that way and he would like the rest of Gotham to feel his pain. Lt. Gordon (Jeffrey Wright) brings his pal, The Batman (Robert Pattinson) to the first crime scene to get his take much to the shock of his colleagues. Batman is pretty good at solving the riddles but the big picture eludes him. As he digs deeper, he runs across Selina (Zoe Kravitz), a young woman who works in the private nightclub run by the local crime syndicate, Carmine Falcone (John Turturro) and an odd looking fellow everyone calls Penguin (an unrecognizable Colin Ferrell). Selina has her own reason to bring down the Syndicate and they begin to work together but not always on the same page. 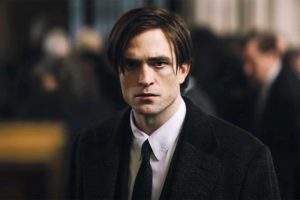 What follows is not a Marvel like adventure filled with light touches and one liners but a detective story with lots of red herrings and wrong turns. This Batman is smart but he is still working out who he is and what his purpose is. He makes mistakes. And he’s very angry. He’s coming to terms about who his parents were and how their actions shaped Gotham. He’s trying to shape Gotham himself but it turns out his influence has not been a positive one. He writes a log every night of what he saw on his nightly vengeance crawl. His narration is reminiscent of Taxi Driver (76). The Batman wishes a rain would wash away all the scum and if not, perhaps he can but as he observes, despite his actions, crime is up more than ever. 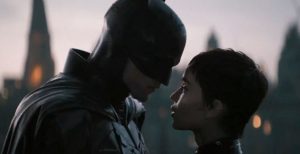 The film is long, just shy of three hours but it’s never boring. Pattinson is excellent. This film has no desire to show Bruce Wayne as a rich playboy as a front for his darker caped identity. Wayne is just as dark and sullen as The Batman. Kravitz is wonderful as “Catwoman” and the scenes between her and Pattinson crack and pop with sexual tension. The rest of the cast are collectively excellent. You don’t see Dano’s face until the very end and his final scene, locked up in an Arkham Asylum cell could foreshadow what a sequel might be, seeing as he makes friend with the lunatic in the next cell who has one hell of sick cackle. I hope there will be a sequel because I have a feeling it can be even better.

Once they find The Riddler’s apartment they discover many notebooks filled with The Riddler’s thoughts and inner demons which reminded me of John Doe’s notebooks in Seven (95). 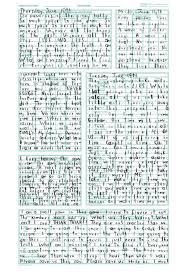 Bruce Wayne’s mother’s maiden name is Arkham. She also spent time in mental institutions when she was younger. 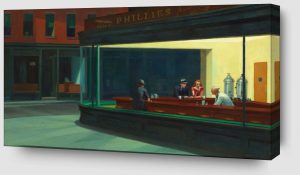 The diner scene near the end reminded me of Ed Hopper’s Nighthawks painting.