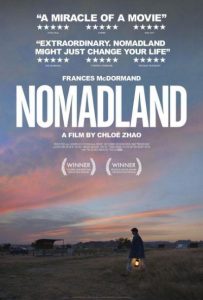 I had heard about this film for a long time and started to think that maybe it was being overhyped. This is certainly better than going into a film with overly high expectations. I watched this film and was completely absorbed by it. It pulled me in. Maybe because I’m getting close to the age that many of the characters are and identifying with the crossroads many of them find themselves. It felt like a 70s film which is a compliment. I love 70s films. This is a beautiful character study and also a look at a real lifestyle of RV living and traveling from one place to another, picking up work and sleeping in your van. The film is based on the 2017 non-fiction book Nomadland: Surviving America in the Twenty-First Century by Jessica Bruder. The reality of people getting to retirement age and not having any money and choosing a transient lifestyle to get by. 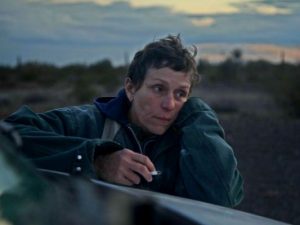 The film takes place in 2011 right after the new great depression has hit. It follows Fern (Frances McDormand) who lives in a small town called Empire in Nevada. The town dies after the US Gypsum plant shuts down. Fern and her husband worked there, and after his recent death and the loss of her job she puts most of her belongings in storage and buys a van. She goes on the road in search of work while living in her van. She gets a job at an Amazon plant and makes a friend Linda who tells her about a desert rendezvous in Arizona where a man named Bob Wells gives seminars on how to survive as a nomad and offers a support system and a sense of community.

Fern makes more friends here including Swankie who gives her helpful tips and Dave (David Strathairn) who develops a crush on her and she she learns more and more about how to survive on the road. She keeps moving and runs into Dave again where they both have picked up jobs at Badlands National Park. They strike up a deepening friendship and its obvious Dave is smitten with Fern. While working at a restaurant in Wall Drug, South Dakota, Dave’s son comes looking for him. His wife is pregnant and he wants Dave to come back home with him. 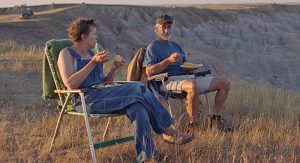 I don’t want to say anymore because I want you to watch it and experience the film for yourself. The film is filled with non actors playing themselves and it gives the film a real genuine feeling, a slice of life that is both astonishing and freeing as well as terrifying. Is this the life that these people really want or just what is left to them? Is this how Fran wants to spend the rest of her life? Or will she choose to settle down again? Because she has choices. The film really struck a chord with me. It reminded me of when I was a young man traveling Europe by myself for five months. It was a melancholy time but a great learning experience. Or perhaps its from spending this past year in Covid isolation and all the anxieties of mortality bubbling at the surface I responded greatly to Fern and her friends and the lifestyle of drifting around, surviving and living lightly. It’s a profound film. 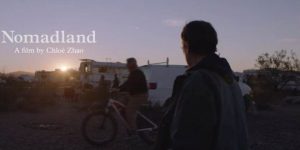 Frances McDormand is one of the producers and asked Chloe Zhao to write and direct which she did with great skill and passion. The film was shot over 4 months in the Fall of 2018 with a small crew who lived out of vans the entire time. McDormand is very good as she usually is. The film has a documentary like fell to it, you feel like you’re peaking into her life and she is just so real and vulnerable. A friend of mine asked me if it was a “downer” and I said no, it wasn’t a downer but that it was a somber film and a beautiful film. It’s a film about life and choices and not living in the past but continuing on down the road.

Previous JUDAS AND THE BLACK MESSIAH Next OSCAR NOMINATION PREDICTIONS 2021