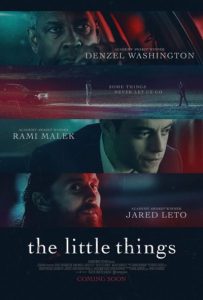 This film boasts three Academy Award winning actors which ups it’s expectations and makes it a ‘prestige’ film. Unfortunately, it does not come close to becoming a classic. Writer/Director John Lee Hancock has a good visual style and methodical approach and creates an eery atmosphere but the payoff falls flat. 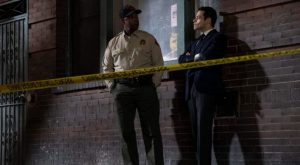 The story follows a Kern County deputy sheriff, Joe ‘Deke” Deacon (Denzel Washington) who is sent to Los Angeles to pick up some evidence for an important murder case. His quick trip gets hung up in red tape and he ends up having to spend the night in LA. We learn that Deacon is well known in LA. He was a hot shot detective who had a mental breakdown five years earlier and is now just a burnout biding his time until retirement. The new hot shot detective, Jimmy Baxter (Rami Malek) is at first annoyed by Deacon, perhaps intimidated because of his predecessor’s legendary status but he still asks him to tag along to the scene of the most recent murder of a serial killer that Baxter is trying to catch. Deacon sees a similarity to an old unsolved case of his and stays in LA to not just help Baxter but find some closure and redemption for himself. There are hints as to why Deacon had his breakdown and it is associated with that unsolved case. 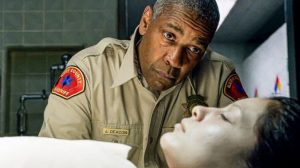 The more time Baxter spends with Deacon the more he gets sucked into Deacon’s habits and tendencies. When Deacon suspects a weird loner, Albert Sparma (Jared Leto) Baxter follows his hunch and this leads them both down a path that neither one of them are prepared for. 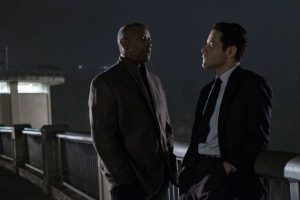 The Little Things reminded me a bit of Seven (1995) but also a little bit of The Pledge (2001) and Tightrope (1983). It has all the earmarks of a classic thriller, older detective, younger detective, unsolved serial killings, weird guy suspect and the mystery past of the older detective. It definitely is intriguing and the performances are good but endings are the hardest thing to pull off. Hitting the landing is the hardest part. I felt that the build up was there but the execution failed. I think I know what the film is trying to say and what it wanted to convey but it just didn’t work for me. This doesn’t mean that the film isn’t worth seeing. I’m a big advocate for ambitiousness. 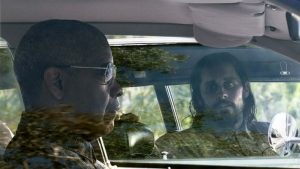 My favorite scene in this film is where Deacon is following Sparma on the freeway. Sparma pulls over to the side of the road, Deacon passes him then, he pulls over but Sparma doesn’t drive on. Deacon decides to go in reverse back to where Sparma had pulled over and he’s not there. He looks across the highway and sees Soparma now parked directly across from him, going the other way on the freeway. Deacon then takes the offramp to go to theater side where Sparma is but again, he’s gone. He’s now back on the other side of the freeway. Sparma then goes over to where Deacon is parked and pulls up beside him. The cat and mouse game is on! 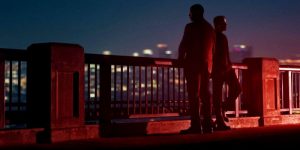 I think the film tries for something profound, it just didn’t quite get there. Perhaps, because the expectations were too high, given the cast, or given that so many films are trying to achieve the very thing that The Little Things is shooting for. Most fail to. 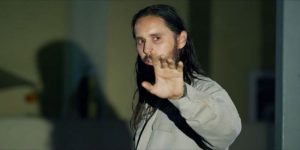 What would have made it better? Where should the film had gone? My first thought was that Deacon was the killer of the group of women from his case from five years earlier and he wanted to pin them on this new serial killer. Picking Sparma and getting Baxter to believe it would ensure he could be free of capture.

But I like the idea of things not being resolved. Deacon is haunted by the case he couldn’t close, especially since he had accidentally shot one of the victims, which was covered up and led him to his breakdown. Baxter’s hero worship of Deacon gets him in trouble and when he loses his cool and kills Sparma, Deacon sees what happened to him happening to Baxter. He tries to save him by sending him the red beret that one of the victims was known to have worn as a way of convincing Baxter that Sparma was ‘their boy’ and alleviate his guilt. What was missing is perhaps more character development between the two characters, more mirroring of Baxter being the young Deacon and Deacon being more self destructive or even unstable. Perhaps the killer from his old case had been caught but Deacon’s guilt about killing that one victim prevents him from accepting that. And Sparma needed to be something more relevant to Deacon. Perhaps, Sparma was who Deacon had targeted five years earlier as the killer so they would know each other and Sparma’s antagonistic attitude would make sense.

It’s a near miss for me but a miss all the same.

Previous TENET Next MALCOLM AND MARIE