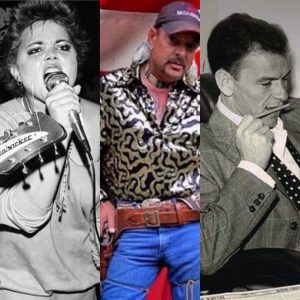 The year 2020, is one for the books. I have never lived through a time life this. It has been, at times, horrifying, thrilling, creative, lonely, frustrating and sad. We have all made our way in our own way, trying to keep sane and hopeful that things will get back to normal. But knowing that it will be a new normal, one with the memory of what we have all been through.

I spent a lot of my time watch TV shows, movies and documentaries. I want to share with you what I watched and what I thought about them. This first article will deal with the documentaries I watched this year. I never used to watch documentaries all that much so it surprises me how many I saw in the last nine months. Perhaps, you have seen many of these as well. 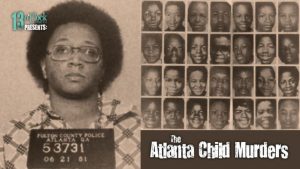 This is yet another deep dive into one of the most famous and controversial serial killings in our nation’s history. The Atlanta child murders occurred over two years, 1979-1981 and ended with the arrest of Wayne Williams who was 23 at the time. He was tried and convicted in the murders of two adults and sent to prison for life. The rest of the murders, mostly young children, were attributed to him though he was never charged which has led to the controversy sever since. This five part series tries to connect the dots and bring some clarification to some of the unanswered questions but it cannot tie up every loose end and therefore doesn’t leave you satisfied. I remember this story being on the news all the time when I was young and I very much remember when they caught Wayne Williams. He may not be responsible for every one of the unresolved murders but it seems likely he was the killer of the majority of them. The murders did come to an end with his arrest. Nevertheless, for those parents, they will never feel that justice has been done. 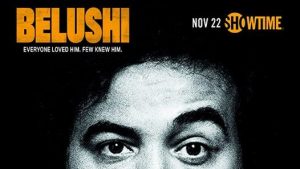 It’s hard to believe there really hasn’t been a documentary about John Belushi made until this one. I think his friends and family are deeply protective of his memory. Director RJ Cutler manages to get some of them to talk in this highly entertaining doc which includes loads of never before seen pictures and clips of Belushi as well as personal content such as letters he wrote to his high school sweetheart and wife, Judy. Belushi was born to be a star. It was evident he had that special magic from a young age and he had a confidence that propelled him to stardom quickly, from Second City and National Lampoon to SNL and the movies. He had big appetites which led to dangerous behavior which he ultimately could not control. He was a bright shiny shooting star that burned brightly and dies out far to early.

THE BEE GEES HOW DO YOU MEND A BROKEN HEART? – HBO Director Frank Marshall MENDOZA GRADE: A 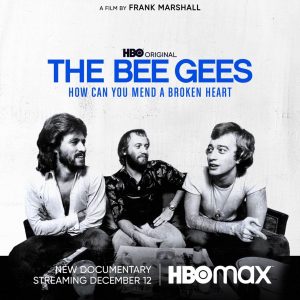 I lived through the 70s and I remember lying to my parents and telling them that Saturday Night Fever (1977) was rated PG when it was rated R. That soundtrack was huge! It became the biggest selling album ever! The Bee Gees had five top ten hits from that album alone. But this was just one small part of their story. This excellent documentary goes back to the beginning and all the way through their triumphs and tragedies, of which their are many of both. You will gain a greater appreciation for the Bee Gees than you’d ever expected to have. 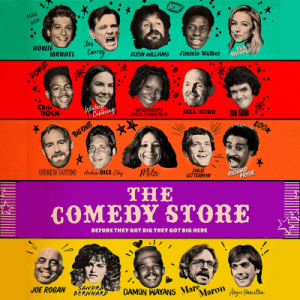 This 5 part documentary delves into the birth and life of one of the most famous comedy clubs in the world. Mike Binder, who started out as a stand up at the Comedy Store then went on to be a film writer-director and actor, interviews many of the still living comics who tell so many interesting behind the scenes stories. He even gets David Letterman! It’s a fascinating series, especially if you’re familiar with stand up comedy.

FRANK SINATRA: ALL OR NOTHING AT ALL – NETFLIX 2015 Director Alex Gibney MENDOZA GRADE: A 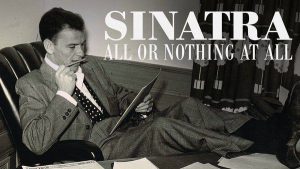 I’m a big Sinatra fanatic! I love all things “Frank”! This is an excellent two part, four hour doc that is completely narrated by Sinatra himself, through his many interviews over the years. You also hear from his wife, children and other friends which makes this a very unique look at his life. The director cleverly uses his farewell concert in 1971 as the spine of the show. Any Sinatra fan will love it and even if you’re not a fan you’ll find plenty of great footage and interesting stories to keep you entertained. 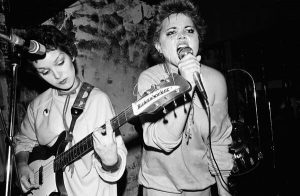 The Go Gos were big when I was in high school! But I never knew the behind the music story about how the band came together and all the drama that came with being the first all female band that both wrote their own songs and play their own instruments to hit number one on the Billboard album charts! What also struck me was how long and how much work it took to become so successful and how fast it could all fall apart. Its a really enjoyable doc. 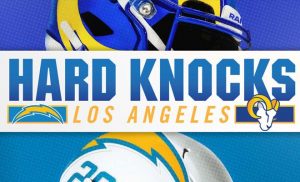 This is a show that HBO does every year which follows, usually, one NFL football through training camp and the preseason games. This included both Los Angeles teams, the Rams and the Chargers. It has the added aspect of seeing how these teams deal with the Covid 19 pandemic and all the precautions that were required to continue through to the NFL season. 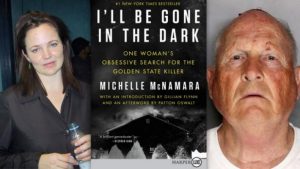 Many of my female friends are into true crime podcast and so I have delved into these type of shows to keep up. This is based on one of the more famous podcasts that centered around the ‘Golden State Killer” aka ‘East Area Rapist (EAR)’ and the ‘Original Night Stalker’. Writer Michelle McNamara launched a website in 2006 called True Crime Diary and she was fascinated by a series of crimes that took place in California in the 1970s and 1980s. It became an obsession and she began to put together a book about her investigation. Unfortunately, she passed away suddenly and the book was completed and released posthumously. On top of that, spurred by her intense and renewed investigation into the murders, the killer was finally caught and brought to justice. Her husband was stand up comic and actor Patton Oswald who co-produced and appears throughout the 6-part series. Its an amazing story and an intensely personal and emotional one.

When I was a kid I thought I was going to win the McMillions game! I went to McDonald’s all the time and collected all the little game pieces in a futile attempt to become a millionaire! I had no idea how futile it was until I saw this six-part series which exposed how the game was infiltrated and rigged by a very select few people on the inside to make them and their friends rich. It’s a little padded and could have been done in less time but those of an older age who remember this promotion will get a kick out of it! 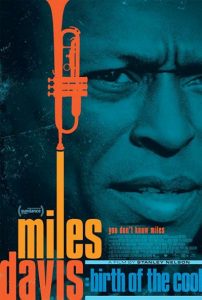 Miles Davis is one of the most famous musicians ever and certainly considered a jazz genius and legend. There have been many different docs and films that have dealt with Davis and I haven’t seen them all to know if there has been a definitive look at the life and career of this complicated man and artist. This is a solid, overview of his life and career which doesn’t gloss over the misogyny and drug abuse and shows a man, faults and all, as the incredible artist he was and how he kept evolving and changing with the times. 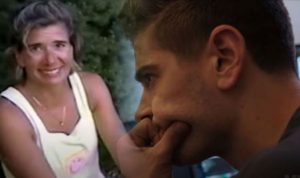 Director Madison Hamburg has made a documentary about the unsolved murder of his mother in 2010. This four part series is a very personal journey for Hamburg as he interviews his family and tries to piece together what happened to his mother and why anyone would kill her. The primary suspect was his father and his interactions with his father are incredibly intense. But while Hamburg discovers a lot that he didn’t know about his mother and his family the show doesn’t end with a reveal of who the killer was! It is obviously setting up a sequel but it was frustrating! 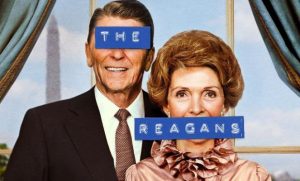 This four part series follows actor Ronald Reagan as he becomes Governor of California and eventually President and how that evolution took place. What struck me the most was how little politics have changed, especially Republican politics. Reagan used the motto “Make America Great Again” and used the commonly known dog whistles to whip up the support of white America, especially in the South. He became a spokesman for corporate America when his career started to wane and they used him and propped him up to do their bidding. The country has been suffering ever since. 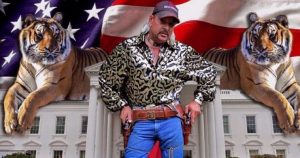 This is where it all started! This documentary his the zeitgeist just as the quarantine started and soon everyone just had to watch it just to keep up with all the chatter on social media. And the memes! Oh the memes! Its a crazy story filled with outrageous personalities. It explored the world of private zoos and the underground world of big cat collectors in America. There’s even a murder mystery thrown in for good measure. Joe Exotic, Doc Antle and Carole ‘fucking’ Baskin became overnight household names. And it’s not over1 Joe Exotic is petitioning Trump for a pardon! 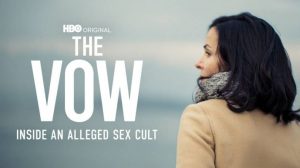 This nine part series explores the Nxivm sex cult and it’s odd leader Keith Raniere. This a a recent true crime story that took place in Albany New York. Rainier was a Jim Jones type of leader who convinced thousands to follow his ‘teachings’ and give up their lives to bring his message to the world. The show could have consolidated its episodes for better effect but I still found it fascinating. Episode One lures you in just as one would by a cult. I was thinking ‘this sounds amazing!” but then things turn quickly. The show follows those few team leaders that exit the cult and try to bring it’s true actions to light. The story also includes the Dynasty actress, Catherine Oxenburg whose daughter gets caught up in the cult. A separate series on STARZ is dedicated to their story and shares a lot of different info into the goings on at Nxivm.

WHAT SHE SAID: THE ART OF PAULINE KAEL – PBS – Director Rob Garver MENDOZA GRADE: B+ 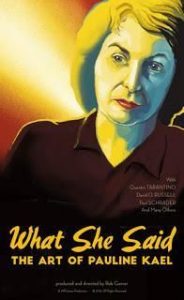 Pauline Kael was a highly regarded film critic back when being a film critic carried some weight. It wasn’t easy though, being a female film critic in a world of only male film critics. But she had a way with words and didn’t hold back with her sharp and pointed opinions. She championed filmmakers like Woody Allen, John Cassavetes and Sam Peckinpah and when she didn’t like something she didn’t mince words. Just ask David Lean. This is a very insightful look into the woman as well as the critic as well as a look at society and mores from a long ago time which wasn’t really that long ago.