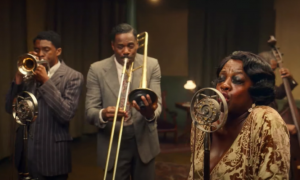 Ma Rainey’s Black Bottom is a Tony award winning play by August Wilson which made it’s debut in 1984. It’s finally been adapted into a film and the cast is perfect. The difficulty with bringing a stage play to the big screen is how to open it up and make it not feel so confined. Ma Rainey takes place in one location which makes the task harder but in these Covid times, with theaters closed, watching Ma Rainey on your TV screen feels just right. It also helps that the performances from the entire cast are pitch perfect and are delivered with so much passion. It’s like watching a stage play in your living room. Ma Rainey is directed by George C. Wolfe, a Tony award winning director and he really gets the best out of his cast. This is also Chadwick Boseman’s final film performance. You might as well start engraving his name on the Oscar. 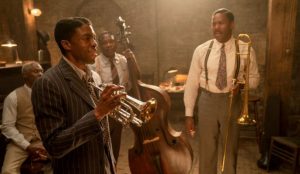 Ma Rainey is a real person. She was called the Mother of the Blues and she was a very well known and successful blues singer in the early part of the 20th century. She was openly bisexual even insinuated as much in her songs. The action takes place in Chicago as Ma (Viola Davis) and her band arrive to record some songs. She is big and intimidating and she doesn’t put up wit anything from anybody. Her band leader, Cutler (Colman Domingo) tries to settle his quartet of players into doing a rehearsal but the trumpet player, Levee (Boseman) is a thorn in his side. Levee is young and cocky and has plans of his own to start his own band, play his own songs. The piano player, Toledo (Glynn Turman) and the bass player, Slow Drag (Michael Potts) are older and they get a kick out of taking the air out of the younger Levee. As the day goes on and multiple delays drag out the recording session, old wounds come to the surface and tensions rise. 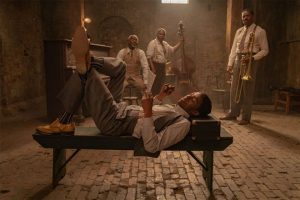 The script delves into the psyche of its characters as a reflection of the psyche of the country. These characters are damaged individuals, victims of racial violence both psychological and physical. It also makes commentary on religion and the existence of God. How do you keep faith in a God that would allow such horrible things to happen to you and the people you love? The film also highlights how white producers took advantage of black artists in the form of Sturdyvent (Jonny Coyne) and Ma’s manager, Irvin (Jeremy Shavos). They paid very little and then turned huge profits for themselves and this would continue on throughout our history. 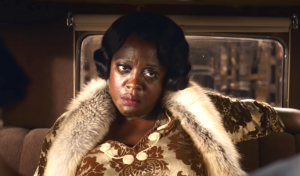 Viola Davis is a powerhouse as Ma. She walks around with such a swagger and snarl that everyone cowers in her presence. Everyone except Levee. Chadwick Boseman has proven in his brief career that he can disappear into any character and he does it again here. He inhabits Levee and gives a performance that cries out to be celebrated. Colman Domingo has been good in several films (Birth of the Nation, If Beale Street Could Talk) and TV shows (Fear The Walking Dead, Euphoria) and he gives another compelling performance here. Glynn Turman is a veteran actor who Im sure you’ve seen before. You may remember him as the science teacher in Gremlins (1984). He’s so good as the old timer piano player Toledo that you might forget to notice he’s acting. The film is also co-produced by Denzel Washington who directed Davis to an Oscar win in another August Wilson adaptation, Fences. 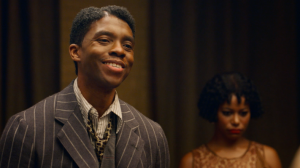 Ma Rainey looks beautiful and the music is rich. The drama is well paced and never lets up. It is a solid piece of filmmaking and an experience that I highly recommend.

Previous THE PROM Next THE MIDNIGHT SKY