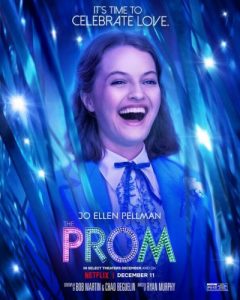 The Prom directed by Ryan Murphy is an old fashioned, Andy Hardy, let’s put on a show in the barn musical if Judy Garland was a lesbian. It is all out campy! Based on the 2018 Tony nominated Broadway musical, The Prom is filled with big stars, big song and dance numbers and a lot of heart. 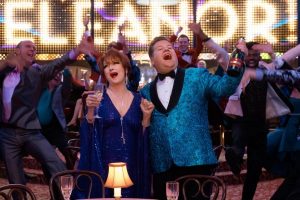 The plot is simple, a group of middle aged has been actors, fresh off a big show opening and closing on the same night humiliation seek out a ‘cause’ they can lend their names to that will generate good PR for them and maybe jump start their career. They find a story trending on Twitter about a young lesbian girl on Indiana who is fighting her school to allow her to go to the prom with her girlfriend. Off this motley theater crew go and they find that they’ve bitten off more than they can chew. But they are a determined lot and the young lady, Emma, accepts their help. 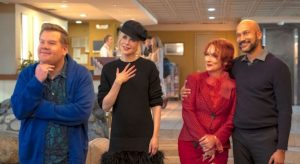 Everything happens that you expect to happen but that’s on par for old fashioned musicals such as this. It really does feel like something that could have been made inn the 1940s except for the homosexuality angle which is the point. If you’ve seen Ryan Murphy’s 2020 Netflix show Hollywood, it had the same feel, what if there were no discrimination in old Hollywood and movies dealt with homosexuality openly and honestly? It’s very liberating. 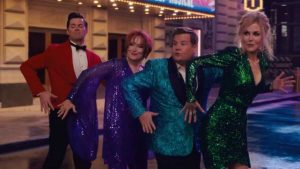 The cast really goes for it. Newcomer, Jo Ellen Pellman is delightful and genuine. There’s a great ease in her performance and you’re rooting for her immediately. She never feels forced and she has a lovely voice. Pullman, being the lead, plays straight woman in this film and is surrounded by a cast of eccentric characters led by the legendary Meryl Streep. Streep plays Dee Dee Allen, a two time Tony winner whose career is on the wane and who’s as narcissistic as they come. She chews up the scenery like, well, Meryl Streep! We all know Streep can sing and she wails out a couple of beauties in this one, my favorite being “It’s Not About Me’. James Corden is her gay co-star whose career, while not as accomplished, is also on the downward spiral. I’m not a big Corden fan but he has enthusiasm to spare and he can carry a tune. This genre is perfect for him. Nicole Kidman! Nicole Kidman? She does a great Bob Fosse style number in the middle that’s great but she’s pretty much wasted here. Keegan Michael-Key plays the school principal with the passion for Broadway and Dee Dee Allen and they become the older romantic couple in the piece though Streep is much older than Key and it doesn’t come across as believable. What am I saying? This is not a movie steeped in realism, you just go with it. Kerry Washington gets to play the angry PTA mom who rallies against allowing Emma to go to the prom and represents all the repression and intolerance in the community. She’s cast against type but she’s terrific and there’s a nice payoff to her character. 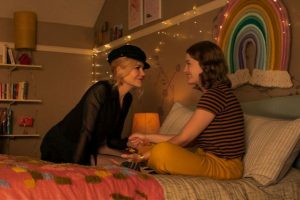 I’ll admit, these type of over the top musicals are not my cup of tea and when I started to watch the movie I was resisting it and judging it but it sucked me in,eventually, and there are some really catchy tunes sprinkled into the works. It’s a little too long but it’s heart is in the right place. If you are a theater person, especially, a musical theater person, you are going to love it! If not, you will still enjoy it if you keep an open mind and just let it whisk you away. It’s not a bad thing these days and lord knows, we all have some time on our hands!