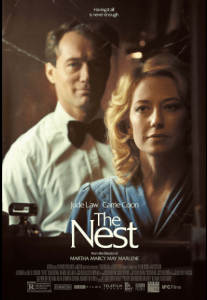 What is The Nest? Nest egg? What does the horse represent? Their marriage? Why is the daughter so bitchy? Why is the son so weak? Do these people know each other at all? Is the house evil? These were some of the many questions I had while watching this film. Some have called it a romance and others a thriller but it’s really neither but I can see why there is some confusion as to high to categorize this intimate and challenging film. 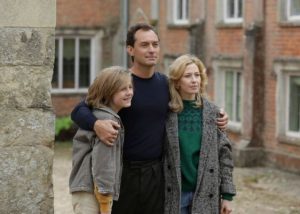 Rory (Jude Law) and Allison (Carrie Coons) are a successful married couple with two children who live in style in New York. He’s a commodities broker and she trains horses while the kids go to private schools. Then, out of the blue, he convinces her to pick up and move to London. She has her reservations but off they go and land in a huge, sprawling country mansion. They will build her a horse barn and training area, he buys her a beautiful house and full length mink coat and takes on a promising new job at a London firm. It all looks like a fairy tale but something feels wrong. Allison is keenly aware of it but, like the audience, can’t quite put her finger on it. Things begin to unravel and soon you’re wondering how far things will go and just how bad it will get. 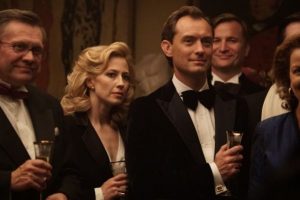 The Nest, written and directed by Sean Durkin (Martha Marcy May Marlene) very much reminded me of those wonderful 70s films that I’ve always loved. It begins unceremoniously, as if in already in the middle of a scene. You keep trying to figure out where the story is going imagining the worst and most predictable twists and turns as we have become used to movies these days being so predictable and dependent on shock and awe. But this is a very intimate character study about Rory and Allison and their marriage. Success had created a false sense of happiness for this family. There were things that they never spoke about with each other about themselves that became apparent as Rory’s good fortune starts to wane. The film keeps you on edge and always guessing and in that sense, it is a thriller. 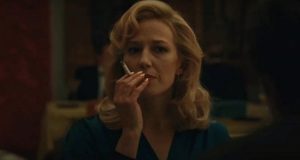 The performances are all very good including Oona Roche and Charlie Shotwell who play the children. Jude Law and Carrie Coons give Oscar worthy performances. Law plays a character we rarely see from him, vulnerable, selfish, even unlikable. But it’s Coons that really knocks your socks off. She is a roller coaster of emotions and you watch in awe and worry when she will finally derail and who will be in her path. Law and Coons really get into the skin of these characters and create two complex and flawed people. You’re not really rooting for them. You’re just observing, like watching an experiment of a marriage. It was like going for a ride and taking a wrong turn and getting lost. You get anxious, worried, scared, end up talking to yourself and laughing nervously. I really liked that about The Nest. You don’t know what you’re in for. Just enjoy the ride. You might just like the unnerving silences.