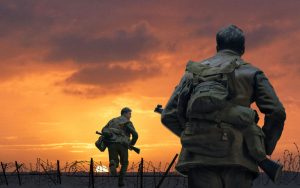 The recent death of Kirk Douglas reminded me of the great World War I film Paths Of Glory (1957) in which he starred in. It was a dark, almost satirical film about the horrors of war. A very young Stanley Kubrick brought his sharp visual style and it ends with a scene in a bar full of war weary French soldiers being serenaded by a young German girl. A similar scene takes place near the end of 1917. 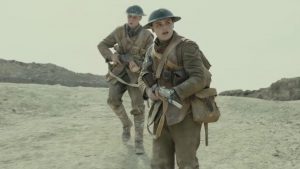 There was a lot of hype about this film long before it’s release. Let me tell you that the hype was not false. 1917 is an amazing piece of filmmaking. This is a film that takes during World War I but this is not what you would consider a ‘war’ movie. It’s the story of two young men who are sent on a mission. They must reach a group of 1500 soldiers and stop them from attacking the next morning because it has been discovered that it is a trap. One of the young men’s brother is part of the 1500. 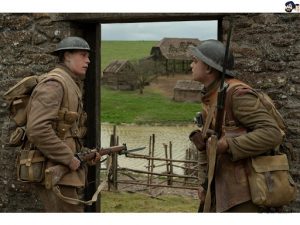 What differentiates this film from other films about war is the way it was shot. The whole film seems to have been done in a single shot. There obviously, were some cuts but you can’t tell where they happened. The camera work is exceptional. The actors and crew needed to do extensive rehearsal to make it work. The sets are amazing. The photography by legendary cinematographer Roger Deakins is beautiful. The two young actors, George McKay and Dean-Charles Chapman (Tommen from Game of Thrones) do a great job making you feel the anxiety of what they are going through. The set pieces are painstakingly designed and the film is filled with both quiet, reflective moments and edge of your seat action. 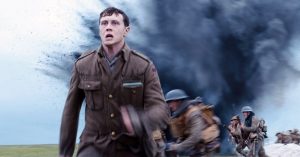 Director and co-writer Sam Mendes has succeeded in making a fantastic and original film. Along with the two young actors, the film is filled with great cameos including Colin Firth, Benedict Cumberbatch and Mark Strong. It is unlike any film about war that I have seen. It is an adventure film, it is a character study, it is an art film, it is an action film. It is all of these! In short, it is an excellent film. Don’t be scared off thinking it will be too violent or too macho or because you don’t like war movies. You would be missing out on having a very special experience.