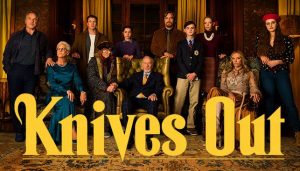 Rian Johnson took a lot of heat for The Last Jedi but there should be nothing but praise for his latest! Written and directed by Johnson, Knives Out has an all star cast and is a cleverly written and fun whodunnit that had me guessing until the end. It’s hard to craft a whodunnit in these cynical times but Johnson has written a gem of a film and elicits wonderful performances from the entire cast. 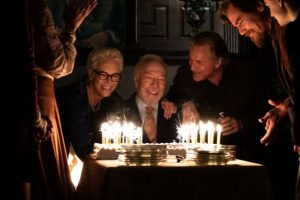 The film revolves around the sudden death of Harlan Thrombey (Christopher Plummer), the patriarch of a large family who has built his wealth by becoming a successful author of mystery novels. An inquiry is begun by the local cops assisted by Benoit Blanc (Daniel Craig), a well known sleuth. The film is told from the perspective of Harlan’s caregiver, Marta Cabrera (Ana De Armas) and circumstances spiral out of v Control in a delightfully deceitful manner. The twists and turns are well thought out and delivered and the ending is a complete surprise!

What a cast! Jamie Lee Curtis is the hard eldest daughter, Michael Shannon, the inept middle son and Chris Evans, playing against type, is the snotty youngest son who everyone despises. Don Johnson is great as Curtis’ Trump loving husband and Toni Collette is hilarious as the wife of the deceased son who has found creative ways to benefit from the family fortune. There’s even a cameo by the great character actor M. Emmet Walsh! He’s still alive! 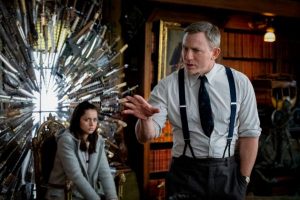 Daniel Craig is terrific as the Hercules Poirrot style sleuth snd Ana De Armas (Blade Runner 2049) is a revelation as the nurse who is in over her head! 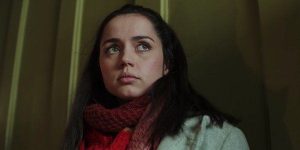 Kudos to Rian Johnson! I’ve long admired his films such as Brick and Looper as well as the episodes of Breaking Bad he directed. He has made a classic whodunnit that would make Agatha Christie proud!