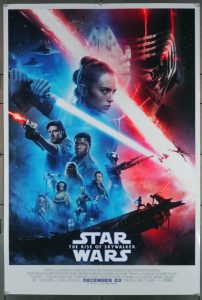 Was there a lot of fan service happening? Absolutely! Star Wars is a family fantasy franchise in the old school fashion. There were also plenty of cameos! I’ll go into that in the Spoiler section.

Rise of Skywalker delivers. JJ Abrams brings it home with a rousing finish. It felt more like Force Awakens, meaning more like the original films. The action sequences are well done, especially the Kylo Ren- Rey light saber clash atop of the Death Star ruins floating in a scary angry ocean.

I had my issues with The Last Jedi even though I found most of it exciting and thrilling. JJ Abrams and co-writer Chris Terrio really Concentrated this final adventure with a singular focus. The Resistance is in its last leg and only Rey, Finn, Poe and Chewbacca can save it. Along the way Rey and Kylo Ren are facing off psychically and on a private journey to find themselves, light saber battles to ensue.

It’s no secret that, somehow, Palpatine is back! The Sith are threatening to take over the galaxy. Neither Kylo or Rey are big fans but both have different ideas of how to resolve the issue. 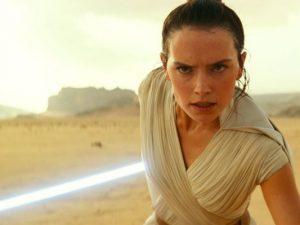 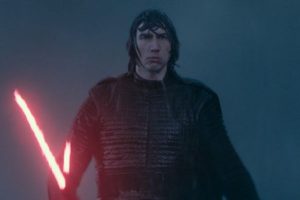 There are some big surprises to be sure but there’s little surprise with the outcome. And that’s OK. This is Star Wars, after all. We’re not expecting a dark finale or even a bittersweet one. We want the fairy tale ending. 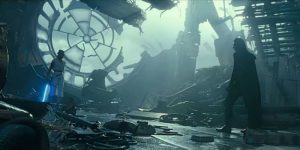 Daisy Ridley and Adam Driver really deliver here. They leave it all on the battlefield. Oscar Isaac gives his most relaxed and ‘Han Solo-ish’ performance of the three films. John Boyega gives his least irritating performance and C3PO just about steals the show with his comic relief. 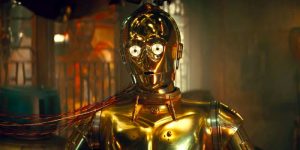 Some new characters are introduced but Abrams is wise to stick mostly with our main heroes. It’s a rousing adventure and a fitting finale. You can nitpick here and there but if you’re a fan you’ll be comply satisfied. Now if you haven’t seen it yet don’t go any further. I will be a little more specific and go into more details. 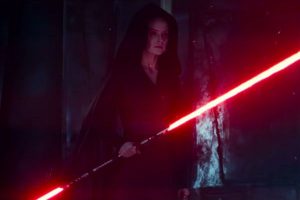 Was Finn in love with Rey? What did he want to tell her when he thought they were going to die? It just seemed like three movies of Finn being overly protective of Rey didn’t amount to much. 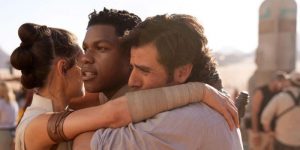 We see Poe’s old love interest who I think was Keri Russell but she was under a mask the whole time!

How was Chewie not on that transport that Rey blew up?

All the bringing people back to life! One time too many for me!

Rose didn’t have much to do. Hardly Any R2D2.

I liked how they used the old footage of Carrie Fisher Snd incorporated it into the movie. Well done! I also liked how they handled her death. Chewie’s heartbreaking reaction killed me!  Made me cry all over again.

The light saber duel on the ruins of the Death Star was amazing! 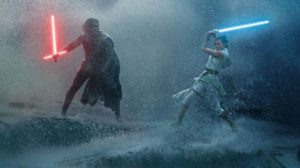 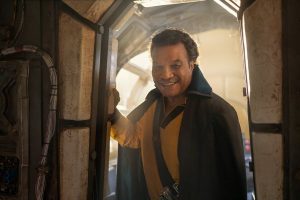 All the cameos! I expected Luke to show up and Lando had an extended cameo but the Han Solo scene was totally unexpected and very cool! Of course the Ewoks showed up but thankfully just for a couple of seconds. We even got a glimpse of ‘Wedge”!

The ending was perfect. Rey returns to Tattoine, to Luke’s childhood home and buries Luke and Leia’s light sabers. An old womAn happens along and asks her name and Rey tells her, “Rey Skywalker”, as the spirits of Luke and Leia look over her. Very nice touch. 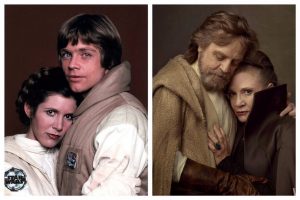 But, look, Star Wars is a family franchise. It’s a wholesome fairy tale and everything is meant to turn out just fine. Don’t expect too many dark turns or consequences. The original made you feel like a kid again. All the films that follow are meant to do the same. And it does! Kudos to JJ Abrams! It wasn’t easy to do but he pulled off a successful closing trilogy that should make George Lucas proud!

Previous BOMBSHELL Next A BEAUTIFUL DAY IN THE NEIGHBORHOOD