A BEAUTIFUL DAY IN THE NEIGHBORHOOD 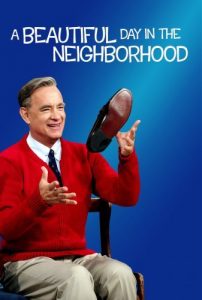 This is not a biography of Mr. Rogers. If you are looking for that you can watch the wonderful 2018 documentary Won’t You Be My Neighbor? A Beautiful Day In The Neighborhood is inspired by a 1998 Esquire article by Tom Junod entitled “Can You Say Hero?” and directed by Marielle Heller (Can You Ever Forgive Me?). It’s very cleverly directed film and was surprisingly moving. 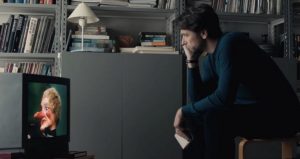 The main story is about Lloyd Vogel (Matthew Rhys) a writer for Esquire with a wife and newborn son. He has a volatile relationship with his father that has caused Lloyd to be emotionally shut down. When he is given an assignment to do a fluff piece on Fred Rogers (Tom Hanks), Lloyd begins a journey of self realization and healing. 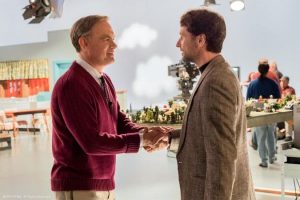 I love how Lloyd tries to resist Mr. Roger’s charms. How could anyone be this sweet and intuitive? Just like Lloyd, you can’t believe this guy is for real. Eventually, he succumbs and begins to allow himself to open up and reach out for help.

Matthew Rhys is very good and carries the film. Tom Hanks is perfect as Fred Rogers. You can’t watch this film and not want to be a better person. Chris Cooper is solid as usual as Lloyd’s alcoholic dad, Jerry. Susan Kelechi Watson is also very good as Lloyd’s wife, Andrea. 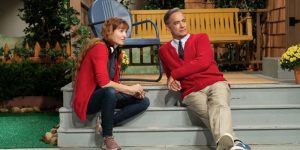 You could do worse than spend a couple of hours with Lloyd, his family and Mr. Rogers. You may even walk out of the theater with a big smile on your face.

Previous STAR WARS IV THE RISE OF SKYWALKER Next KNIVES OUT