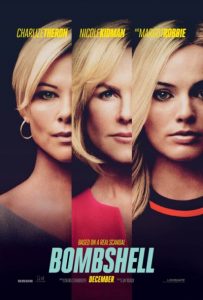 It’s hard to believe that both Roger Ailes and Bill O’Reilly were both taken down by sexual harassment charges in 2016 and Fox News hasn’t seemed to have missed a beat. Bombshell tells the story of how Gretchen Carlson and Meghan Kelly took them out. Director Jay Roach (Game Change, Trumbo) working from an original script by Charles Randolph (The Big Short), brings the energy and lightness of those previous films that makes Bombshell easy to get into but a little problematic when it tries to get serious and it does when dealing with Margot Robbie’s character, Kayla, a conservative millennial, closet lesbian whose desire for a career on Fox News leads her to make some unfortunate decisions. 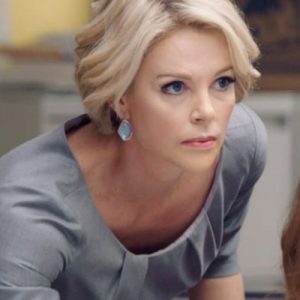 Bombshell begins with Meghan Kelly (Charlize Theron) prepping for the 2015 Republican  debate. She calls out Trump for vulgar treatment of women which brings a Trump Twitter assault  which we all remember. The action takes place over the Summer of 2015 as Trump gains traction with Fox viewers and the female anchors including Gretchen Carlson (Nicole Kidman) come under more scrutiny. 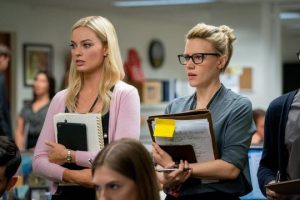 It’s ultimately Carlson’s firing and personal lawsuit against Ailes that starts the ball rolling and the drama comes from who, if anyone, will back up her claims. It was the #MeToo moment that preceded the Harvey Weinstein allegations the following year. The harassment under Ailes was so out in the open it’s unbelievable yet it happened. Bombshell gets to the heart of it and the story rolls out quickly and bluntly. But in the moments when there is a shift in tone from light to serious it’s abrupt and jarring and the laughter turns into nervous laughter and then ‘maybe we shouldn’t be laughing’. 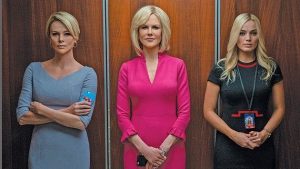 This type of film style such as Vice and The Big Short is helpful when dealing with unpleasant subjects like Dick Cheney and the Wall Street crash occurs 2008. But it’s a trickier tactic when dealing with sexual harassment. For the most part, I enjoyed the film, it’s important to remember what happened and document it. It may not be the perfect film that will document the Me Too movement but it’s the first and it carries a lot of star power in its presentation. 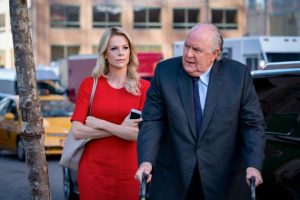 Charlize Theron becomes Meghan Kelly. She looks like her and sounds like her and she is amazing. Theron also produced the film. Kidman also registers as Carlson. The make up department deserves an Oscar. Imitation for sure. Robbie plays Kayla, a fictional character whose story carries the most disturbing aspects of the film. Robbie gives a fine performance, a tough one in the middle of all the action. The rest of the cast is too notch from John Lithgow as Ailes to Connie Britton as Ailes’ wife and Mark Duplass as Kelly’s husband. Kate McKinnon, Allison Janney, Malcolm McDowell and other familiar faces pop up as well and are fine.

This is a solid film with some great performances and an important message. Some tonal problems keep it from really being a home run but it’s definitely worth seeing.