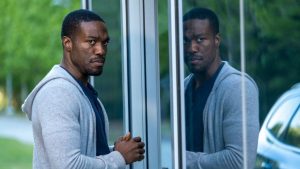 Wow! Each episode keeps delivering the goods and the surprises! Things are heating up and picking up speed! This episode focused on Angela’s childhood and we get some delicious little details that fill in some blanks. But the finale was huge! Talk about the elephant in the room! 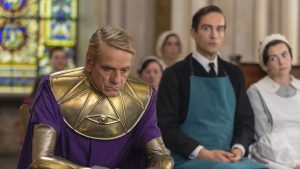 Let me start with the trial of Adrian Veidt. Veidt sits in the courtroom in full Ozymandias garb as it looks like his fate is sealed with the verdict being decreed by a squeeling pig. When it came time for Veidt to present his case, he stood, cleared his throat and let out a big, noisy fart. “The defense rests.” 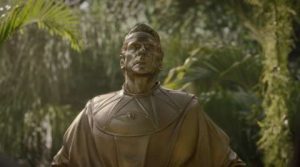 We believe that he is imprisoned on one of Jupiter’s moons. The trial has been going on for ‘365’ days which means we’re not sure when in the time line this is taking place. A couple of theories I have heard are very interesting. One is that the bronze statue of Veidt in Lady Trieu’s garden is actually Veidt! Perhaps his cumuppence of the trial? He got Han Solo’d! Another theory is that the object that came crashing down out of the sky in front of Lady Trieu and the couple whose land she had just bought could be Veidt returning to Earth. In any event, Veidt’s fate will be known in the next two episodes and my feeling is that He will be alive and play an important role in the finale. 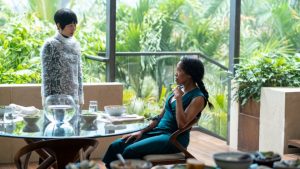 “People who wear masks are dangerous and you should be scared of them. They’re hiding something”

Angela is being looked after by Lady Trieu. She has a big IV attached to her arm with a big tube that is supposedly attached to grandaddy Will. Lady Trieu admits that Bian is not her daughter or a clone of herself but actually a clone of her mother and she has been downloading her mother’s memories into Bian. It’s likely that Lady Trieu’s mom was killed in Vietnam by Dr. Manhattan. 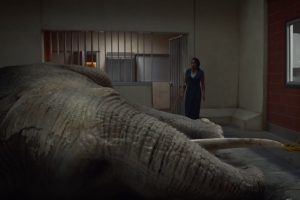 Angela follows her IV to a door she believes Will is behind. But when she gets in she sees that her IV was actually attached to a huge elephant! That creeped me out! It makes sense that Lady Trieu is housing memories in an elephant. How many people’s memories are in that one elephant? 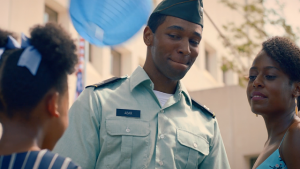 We get to see what happened to Angela’s parents. Her father was in the military and they are both killed by a suicide bomber. Angela is placed in an orphanage from hell and for a moment you think she will be saved by her grandmother June who comes to Vietnam with the intention of bringing her back to Tulsa. Unfortunately, June has a heart attack and dies. We know Angela stays in Vietnam and will meet Cal and we see here that a female Vietnamese cop was kind to her and made an impression on her and she will grow up to be a cop. 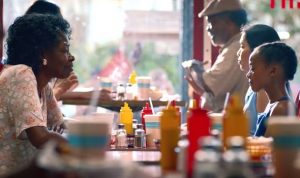 Back in the present, Lori goes to see Jane Crawford and suprise, surprise! Jane is in cahoots with Senator Keene and the 7th Kavalry. She pushes a button and Lori falls through a trap door in the floor. She is held captive and gets a visit for Keene who gives her a clue as to what their plan is, “It’s extremely difficult to be a white man in America right now so why not try being a blue one?”

Angela stumbles into a room where she sees people in the Blue phone booths where they can leave a message for Dr. Manhattan on Mars including the one Lori made in Episode 2. Lady Trieu waks in and they have a showdown in which Lady Trieu says, “Angela, are we going to keep fucking around here or are we going to be honest with each other?” Dr. Manhattan is not on Mars. He’s in Tulsa pretending to be human. Holy moly!

Angela high tails it out of there even ramming Red Scare’s car on her way out. She gets home and tells Cal that the time they talked about has come. He seems confused. She takes ahammer and hits him in the noggin, knocking him out. She then proceeds to whack him a few more times and reaches into his skull and pulls out a circular object that looks like the symbol on Dr. Manhattan’s forehead. 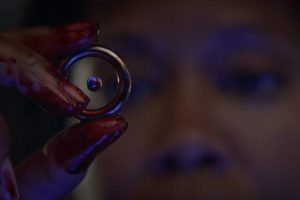 “Hey, baby, we’re in trouble” she tells Cal and a piano version of Life On Mars plays the episode out.

Cal is reading For Whom The Bells Toll by Ernest Hemingway when Angela comes home. Any significance to this? The hero of that book dies in the end, heroically.

The US won the Vietnam War and became the 51st state.

Images of Dr, Manhattan are everywhere in Vietnam. The children in the orphanage spend some of there time painting Dr. Manhattan dolls. 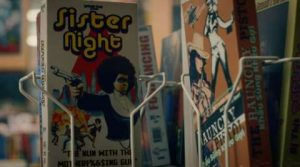 Sister Night was a movie that young Angela saw in the store and always wanted to watch but wasn’t allowed. Grandma June was going to watch it with her once they returned to Tulsa but they never made it. I’m sure Angela eventually saw it and of course took the name. 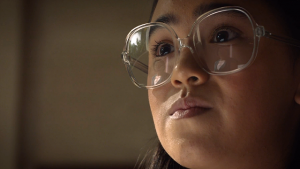 2 Dr. Manhattan will save Lori 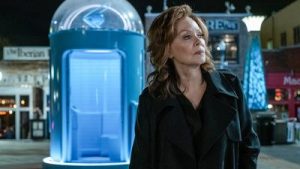 3 Keene and the 7th Kavalry will capture Dr. Manhattan.

4 We haven’t seen the last of Don Johnson. One more flashback.