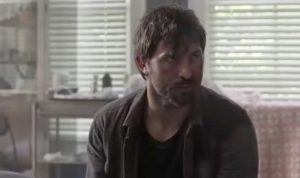 Well this was a pretty dark mid season finale! It sets everything up nicely for the back half of the season which should prove to be very exciting and tense. 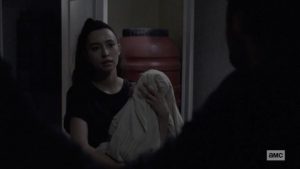 The cold open was a doozy! Rosita comes to check on Saddiq con baby. They’re greeted by Dante who speaks Spanish to Rosita. Nice touch. But Rosita senses something’s wrong and when Dante can’t convince her to go he comes at her with a knife. 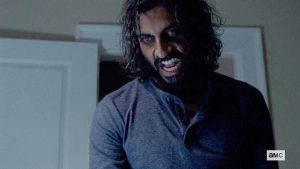 Meanwhile Saddiq reanimates! He comes out of the bedroom and heads straight hit the defenseless baby laying in the corner, crying. Can you imagine seeing your zombie dad coming to eat you? Chilling! Rosita manages to subdue Dante in time to stab Zombie Saddiq in the noggin. Roll the opening credits! 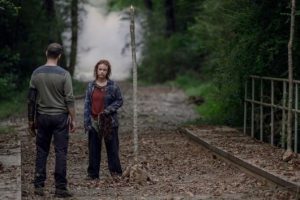 Aaron makes progress with Gamma. She’s willing to trade telling them where Alpha is keeping the walker herd in exchange for letter her see her nephew. Aaron takes the message back to Alexandria and discovers that Saddiq is Dead. Dante refuses to talk. These Whisperers are dedicated to their leader. Why is Gamma so easy to blab? 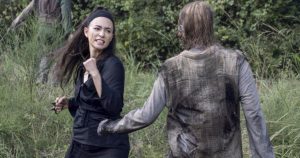 They have the funeral for Saddiq and then Daryl, Carol and Aaron are off to rendezvous with Connie, Magna and Kelly to see if Gamma’s info is correct. 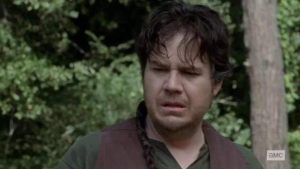 Rosita tried to work off her grief by killing some walkers but gets in trouble until Eugene comes along to help her out. It’s a very awkward but sweet reunion. Oh you can see the writing on the wall!

“Encourage your paranoia about us, which will push you into bad decisions. Places like this are cruel promises to their people and they crumble at the smallest nick. Hell, I’m going to enjoy watching you tearing each other apart wondering what to do with me, just like with Negan.” Dante 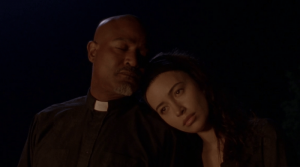 Rosita tried to open up to Gabriel about how she’s afraid to tie and leave her baby alone. Gabriel has more important things on his mind and basically tells her she’ll get over it. That didn’t sit well with the little lady. Knowing he needs to make amends he goes to visit Dante in the cell and makes the call. Justice must be done so he proceeds to ventilate Dante with about 15 new holes. Rosita watches him leave the scene if the crime with his hands covered in blood. She cuddles her baby and seems to nod in approval. 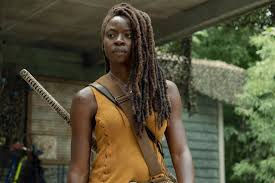 “My mercy prevails over my wrath”

Meanwhile, Michonne, Judith and Luke are making their way to Oceanside. Luke is whistling Rachmaninov because he’s in love and convinced them to stop at at a library along the way for some new books. Luke gets assailed by sone walkers and sone guy comes out of nowhere to save him. Michonne gets word about Saddiq and they make Oceanside post haste. The Good Samaritan left his bag at the library and follows them to Oceanside to retrieve it but gets caught. Look, he’s a shady looking character who shows up with a herd of walkers behind him. Judith sliced his leg as he tries to escape and Michonne questions him. 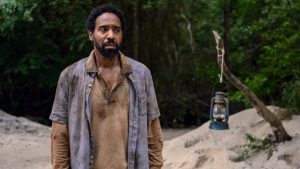 She is tough on him but he says something that triggers her. “Mercy is in short supply these days”. Michonne remembers what Rick said once. The things that Carl’s death inspired in him. The resaon he didn’t kill Negan. “My mercy prevails over my wrath”. She decides to trust him and believes he’s not a threat.  He’s just trying to get back to his family who apparently live on a nearby island and also happen to have a cache of weapons. So she decides to go back with him on a boat to his island. 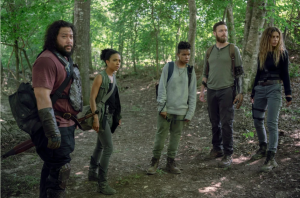 The end of the episode is just crazy stupid. Gammas info turns out to be bad. They don’t find the walker herd. But Carol sees Alpha and decides to chase her which is what she wants! And of course, the rest of the group go after them. It’s a trap of course! They end up trapped in a cave with the walker herd! No way out! Negan will have to go save them! Of course!  Carol has acted stupidly all season. Daryl is to blame too for knowing this and allowing her to put all their lives in danger. It should be an exciting last 8 episodes!

Speaking with my friend Charlotte, we just can’t believe that any Whisperer, after seeing Alexandria, wouldn’t want to trade in their skin suit and side with Michonne!

I have to say I’m with Gabe on this one. Dante needed to die. 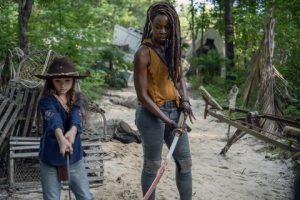 There are way too many characters! Some of them go missing for many episodes at a time. Where is Aiden? Yumiko?

I loved the little scene between Ezekiel and Carol. So sad. 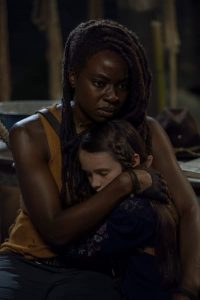 2 Gamma. I can’t figure out her purpose. Is she really going to sell out Alpha or is she scheming to take control of The Whisperers? I have to say she has to have a bad motive to help Alexandria. She hasn’t been around long enough to have a conversion.

3 Eugene will get together with Rosita! It’s gonna happen!

4 Ezekiel will go out heroically.

5 Michonne is going to find proof that Rick is still alive and will go off in search of him. That’s how she makes her exit