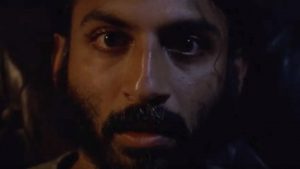 This episode centered on Siddiq and that’s not always a good thing. I always complain that there are too many characters on the show and that they need to be thinned out. I finally got my wish. 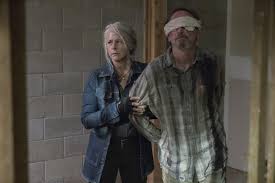 First though, Carole brought her prisoner back to Alexandria which infuriated Gabriel. They had to kick Lydia out of the cell to through this guy in. It looks like he won’t talk and then Lydia suggest using sugar instead of threats. Carole puts in her Homemaker Carol face and brings the prisoner homemade bread and various jams. At first, it looks like it’s gonna work until he spits it back in her face. He is never going to talk. Carol very calmly stands, outs her wedding ring on and starts beating the prisoner. Once Gabriel and Daryl pull her off, Siddiq and Dante come in and treat the prisoner. The prisoner looks at Siddiq and says “I know you” and Siddiq freaks out and Dante tells him to go outside. 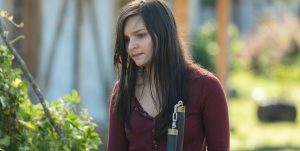 Carol talks to Lydia and convinces her yo come gown to let the prisoner see her. Alpha has told her people that she killed Lydia so seeing her alive would shatter them. But by the time they return to the cell, the prisoner starts having seizures and dies. Dante discovers that he was given hemlock and suggests it was Siddiqs fault because he packed the medical bag. 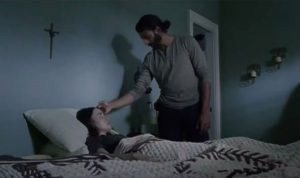 Saddiq feels like he’s losing it. He has a long scene with Rosita where he opens up to get snd she comforts him snd gives him support. We’ve seen very few scenes of these two though we know they had a relationship and a child but this is the first time we see the attraction. 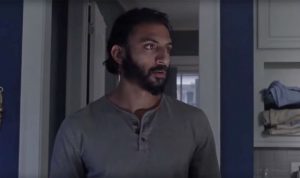 Poor Siddiq visits the old lady he’s been looking after that has whatever has been going around the community. And when he discovers Dante digging a grave and seeing that it’s the old lady he loses it. He sits by the man made lake they made and decided to end it. It made sense. I was expecting it. But the Rosita jumped in after him and saved him. She gives him a pep talk and he pulls himself together. He even has a ‘eureka’ moment and realizes that people are getting sick via the water filtration system. 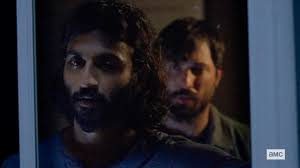 He goes back to his room and Dante comes to visit. Saddiq has a new found energy. He seems like he’s about to recommit to bring better and helping people. And that’s when he realizes something. He knows Dante from somewhere else. He recognizes his voice. Dante was in the barn with him when Alpha was chopping heads. He was the Whisperer holding Saddiq down. Holy crap! Just as Saddiq realizes it Dante stabs him! Farewell, Saddiq! I did not expect it! 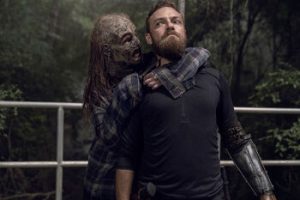 Meanwhile, on the borderline between Whisperer territory and Alexandria, Aaron and Gamma have been developing a flow moving trust. Alpha wants Gamma to get info from Aaron but Gamma has been drawn to Aaron’s decency and talking about how good they have it in Alexandria.

Carol convinces Lydia to take off with her and they get on horseback and end up in the bridge with Aaron and Gamma. Gamma seed Lydia and freaks out! Lydia realizes that Carol has used her to gain an advantage over Alpha and runs off on her own. Carol effed up! 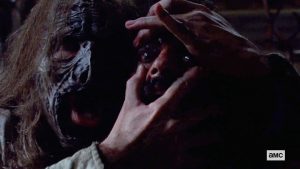 Dante is a twisted Mofo! But Rositas gonna take him out.

Negan is gonna save Carol but not until the Mid Season premiere and hell do it without blowing his cover with The Whisperers.

Where’s Michonne been? Her and Judith gonna go on a killing spree in the mid season finale