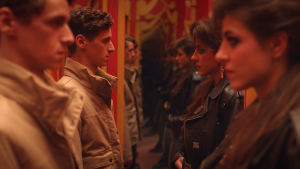 This was a Looking Glass-centric episode, also known as Wade Tillman wonderfully paid by Tim Blake Nelson. The first scene was effin awesome! We some a young wade coming to a New Jersey seaside town to spread the word of God to these sinful heathens when he encounters a young girl who leads him into the Fun House, making him think he was going to get lucky but steals his clothes and runs out, Before he can chase her a terrible thing happens. A sound shatters the fun house mirrors and causes him to bleed from the ears. He wanders out to discover hundreds of people are dead. The camera keeps pulling back and back and back all the way to New York City where we see a giant squid laying across the NYC skyscrapers and thousands are dead. Wade was there! And he has been traumatized by it. 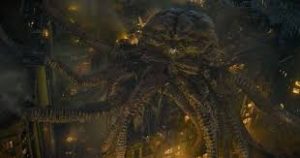 This is why he is so obsessed with the study of squids and why he lives in a bunker and why he wears a mask. As Lori said in Episode 3, “people wear a mask to hide from the pain”. We see that Wade is in a lot of pain. He is estranged from his wife who he is still friendly with and who helps him with some free scientific assistance. It seems she still cares about him but his own issues have driven a wedge between them. The pills that Angela asked him to identify, he is told by his ex, is a drug called Nostalgia. It is a drug that are memories in pill form that can sometimes lead to psychosis. It is also a custom made drug so those pills contain Will’s memories. 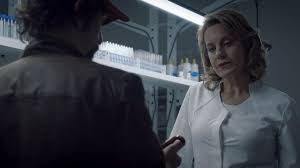 We see Wade runs a company called Clarity Consumer Research. We see him do some market research studies on a come back to New York promo that even has Michael Imperioli saying “You know how we like our squid now? With some lemon juice and little marinara”. But Wade tells the group that people hated the promo. He reminds them that people are still traumatized by what happened when three million people died. “That was a long time ago, people have moved on”, he’s told. “Well, they’re not moving on to New York” he tells them. 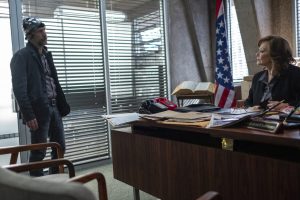 Lori calls Wade into her office and we get some background on Wade. “You were in New York on 11/2”, she reads. “You were near the psychic blast. Still have trouble sleeping?” Wade tells her that he sleeps just fine in a way that says that you know he is lying. He joined the force right after White Night which means he got to start wearing his mask, a reflective aluminum that protects him from future psychic blasts. His baseball cap also is lined with the same material. Lori also lets him know that she’s bugged the cactus on his desk and asks him what the pills are. He doesn’t know yet and he wouldn’t have told her if he did. 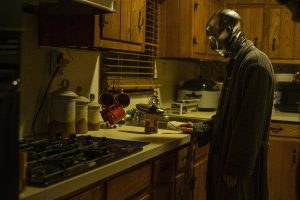 He also runs a help group for people who suffer trauma that stems from the events of 11/2. He tries to be strong. He tells them that when that ‘abomination’ transported into New York City it united the world and it prevented an almost certain nuclear war. A new person walks in. It’s Paula Malcomson! He leads the goup in their mantra and then runs into Renee (Malsomson) in the parking lot. She strikes up a conversation with Wade and they go for a drink. They flirt and Wade actually smiles. They call themselves cabs and have a little make out session outside the bar. “You’re right. I’m still inside the tunnel” Wade tells her. She gets in the truck that comes to pick her up and as it drives away a head of lettuce falls out the back. Wade follows it to a warehouse. He calls for back up. He searches the truck and finds gun. He ventures inside and sees a group of Kavalry teleporting basketballs. He tries to arrest them all which seemed like a crazy idea! It was. It was a set up. She lured him there. The gun was loaded with blanks. 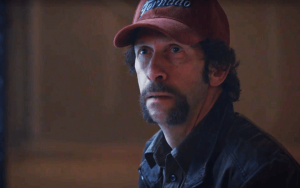 Wade is taken to a room with a wall of video screens. He is joined by a Kavalry member whose voice he recognizes. “Are you even going to try to disguise your voice, Senator?” he asks. Sure enough it’s Senator Keene. Keene tells him that he came down to take charge of the Kavalry to keep more cops from getting killed. He controlled the Kavalry and his buddy Judd controlled the cops. “That ain’t true” Wade says. “Is anything true, detective?” Keene says. He then shows him a video. A shocking truth 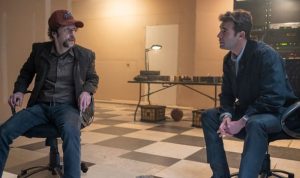 Wade watches a video made by Adrian Veidt on 11/1/1985. The day before that giant squid gets teleported into New York City. He addresses the newly elected president Robert Redford. Though Redford won his election in 1992 and he first watched this video the day after he was sworn in in 1993, Veidt recorded the video years before. Veidt tells him that the squid that teleported into NYC was not from outer soace but sent by him. It was all a hoax intended to save the world which it did. Veidt is hoping with Redford’s help, to create a utopia, a gentler kinder world. He then says that over the next few hours he will further explain to Redford what he has in mind. We don’t see the rest of the video but we assume that wade watches it all. 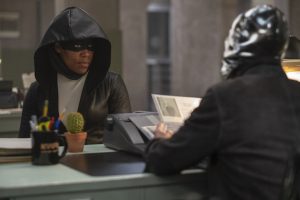 The next morning, Wade puts on his mask and goes to work. Angela comes to his deask and Wade tells her that the pills are Nostalgia and that he wants to help her. Angela then tells him about Will and in turn has told Lori because of that damn cactus. “I’m sorry”, he tells her. Lori comes out of Judd’s office with her gun raised and places Angela under arrest but before they can cuff her she swallows a bunch of those pills.

Wade comes home to find the replacement security kit at his door. He throws it in the trash but goes back for it which means he hasn’t completely let go of his anxieties, He goes in the house and soon after a van pulls up and several Kavalry members with shot guns pile out and head for Wade’s door. 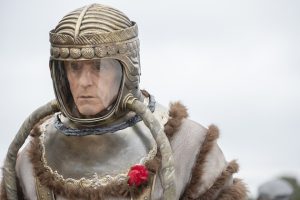 Meanwhile, Veidt and his clone servants have prepared for the final eperiment to take place. Veidt gets in his ‘space suit’ is attached to a long rop, gets in the catapult and is shot into the air! And just as many expected, he punctures the sky and ends up floating in space! He lands on what appears to be one of the moons of Julpiter! What we also see there are hundreds of Mr. Philips’ and Ms. Crookshanks’. Veidt proceeds to use these bodies, breaking limbs, if necessary, to create a distress signal. When the satellite passes by, someone on earth will see the message, “HELP ME, D”. 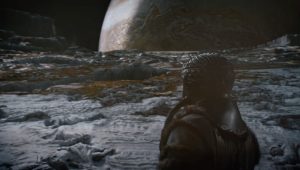 Who is D? His old friend Dan Drieberg? The Nite Owl? Suddenly, the rop is pulled and he is dragged back to his prison. His jailer on horseback, wearing a mask is very angry. He looks like Mr. Philips, perhaps the original. He indicates that Veidt will pay a price for his insolence. What might that be? 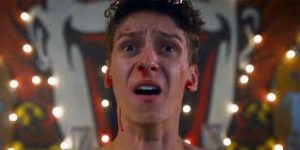 The episode makes good use of Wham’s Careless Whisper.

That image of the giant squid was amazing!

Wade is a sad man. Now that he knows the truth about the event that traumatized him what will he become now? Stronger or more pitiful?

Renee talks about seeing the Steven Spierlberg film about the events of 11/2 called Pale Horse which seems to be the film he made instead of Schindler’s List but uses the imagery of the little girl in the red coat walking around in the aftermath. 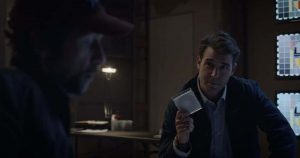 1 Angela is going to learn so much reliving Will’s memories!

2 Will obviously meant for her to take them.

3 Judd was Kavalry all along!

4 Who is Veidt’s captor? He wears a mask too! He’s just the jailer. Lady Trieu is the one who put him in that prison.

5 Now that Paula Malcomsen (Deadwood, Ray Donavon) has made an appearance I expect her to play a major role. She’ll come to Looking Glass’ aid!