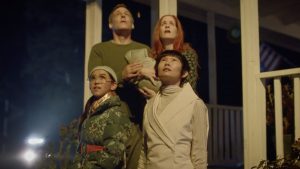 Episode 4 moves very swiftly as we are introduced to Lady Trieu. She plays hardball with a child-less couple by offering them their own baby who she has created from their own sperm and egg in exchange for their home and property. She apparently needs it for her ‘Millennium Clock’ project. Lady Trieu will become a major character in the rest of the season and she is a very interesting character indeed. 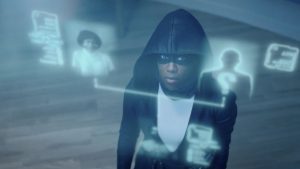 Angela goes to the bakery and tries to clean up every bit of eveidence that Will was there, even breaking down his wheelchair into pieces that fit into a gym bag. She then breaks into the reparations center to see her family tree which confirms that Will is her great grandfather. As she leaves she runs into Lori who has just watched a car fall out of the sky in front of her. It’s Angela’s car and Angela finds Will’s pills in the glove compartment. 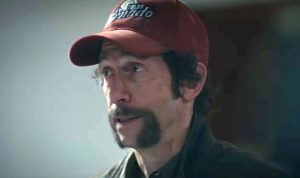 Angela seeks out Looking Glass’ help. She asks him to find out what the pills are and to keep the KKK outifit she found in Judd’s closet. “He was a racist” Angela says. “He was a white man in Oklahoma” Looking Glass tells her. The outfit was old school, perhaps it belonged to Judd’s father’s who was also a lawman. 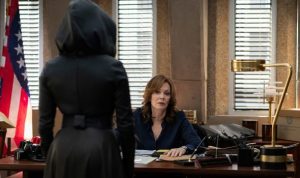 Meanwhile, Lori has moved into Judd’s office and has taken charge of the police department. She tells Angela that they’ve found Will’s fingerprints in the car and knows that the wheel chair tracks probably belonged to Will. She also tells her that Will was a cop in New York in the 40s and 50s but retired early. Agent Petey comes in with some info and before you know it the three of them are driving off to visit Lady Trieu. This is the best scene of the episode. Lori and Angela get to know each other. Lori tells her that the reason people wear masks is due to some trauma they experienced as a child. Then she tells Petey to tell Angela what her trauma is. “Agent Blake’s parents were The Comedian and Silk Spectre.” Her father raped her mother and that is how Lori came to be. Lori seems to like Angela. I love that Lori was willing to share this with Angela but I suppose she should have known since it seemed to be common knowledge. 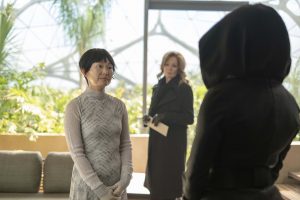 Angela wanted to know why Lori was so interested in her car. Lori says the car disappeared the night Judd died so it must be ‘of a piece’. She’s right of course. How does a car fly away and then get dropped from the sky all of a sudden? The answer seems to lie with Lady Trieu and her Millennium Clock project. They have flying crafts being used for the construction. Lori and Angela meet with Lady T who seems willing to cooperate fully with their investigation. Then, Lady T starts speaking with Angela in Vietnamese. “Your grandfather wants to know if you found his pills?” T says. “Tell that mother fucker he should ask me himself” Angela answers. Lori notices that Lady T has a gold statue of Adrian Veidt but wonders why it depicts him as old rather than in his prime. Veidt disappeared four years ago and Lady T bought his company. 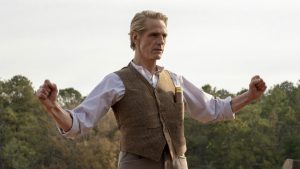 Meanwhile, in crazy town, meaning Adrian Veidt’s world, Veidt is in a row boat in a lake fishing out fetuses! He picks two and brings them back to his lab where he puts them in a chamber flips the switch and brows them into new versions of Mr. Phillips and Ms. Crookshanks! He brings them back to his castle and explains that he is their ‘master’ but not their ‘creator’. Their creator must be also his prison keeper. Apparently he was so upset about his failed experiments from the last episode that he killed all the other clones. 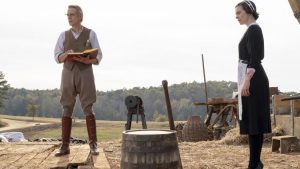 He then uses a giant catapult to shoot the dead bodies of the various Phillips and Crookshanks into the sky where he watches them disappear through his telescope. The whole place seems to be a large construct created to keep Veidt prisoner. At first, Veidt felt it was a paradise but no longer. He wants out. 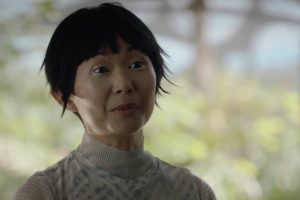 The episode ends with Lady T’s daughter having a nightmare. She’s in bed connected to an IV which furthers the theory that she is some kind of clone. She rushes to her ‘mother’ and tells her of the nightmare she had. She describes a story of her village being burned down and her running away, barefoot and in fear. “My feet still hurt”, she says. “Good”, Lady T tells her and then refuses to walk her back to her bed. As she starts back to her room she says, “Goodnight Will” and we see that lady T has been sitting there having tea with Will. Will, it turns out, doesn’t need a wheelchair and he is in cahoots with Lady T in whatever plan they have going which is going to take place in three days. “I’m all in”, Will tells her, “Tick tock, tick tock, tick tock” 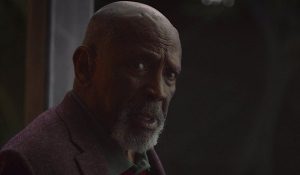 Looking Glass lives in a bunker and is obsessed with squids. Could squids figure again in the future? I don’t think so. But it is a clue to what will. Lady T seems to be creating something similar to what Vedit did in the comic but is her intention the same? World peace?

Angela had an odd encounter with a guy now known as “Lube Man”! Who the hell is he? Is that his only power? 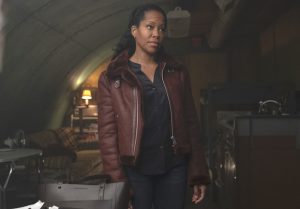 What’s with the birthday cake that Vedit makes Ms Crookshank cook him every day? It has to mean something, right? Everything does!

Angela met her husband Cal in Vietnam. How? What did happen to Angela’s parents, whom Angela tells Lori, died when she was very young? Obviously, the source of her pain. 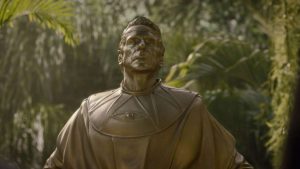 1 Angela and Lori will became partners

2 Lady Trueu’s daughter is a replica of her.

3 Will is really Dr. Manhattan

4 Veidt is a prisoner on Mars

5 The ‘Tick- Tock’ is referring to another apocalyptic moment. Not squids this time. But the end of electrical power.