THE WALKING DEAD RECAP S10EP5 WHAT IT ALWAYS IS 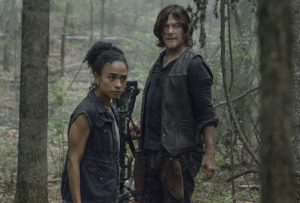 This episode was jam packed with story and action. But the most impressive secnes were with negan and his long awaited reunion with his Lucille. This episode has some tough moments which reminds you of how dark the show can still go and willing to go. 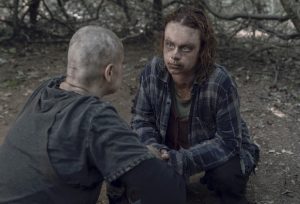 Aaron discovers Gamma has been killing walkers, opening them up and spilling them into the river, trying to contaminate it. While Gamma was killing one walker she flashbacks to what she did to her own sister, sacrificing her to save Alpha and seemingly having regrets about it. She slices her hand open and Aaron comes along and throws her some gauze because Aaron is always prepared with first aid. She runs off and tells Alpha what happen who sees that developing that relationship could be useful. 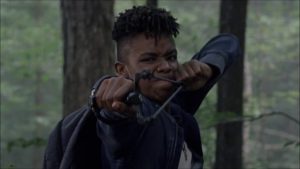 Supplies have been going missing and Yumiko has her suspicions that Magna is behing it. Magna is still acting weird. Kelly goes out hunting and her hearing is worsening and she gets in trouble and is injured trying to get away from some walkers. Daryl, Connie, magna and Dog go looking for her. When they find her, she needs first aid (Where’s Aaron?) and Kelly tells Magna to fess up. They have been creating an emergency get away stach of supplies. Daryl is pissed and so is Connie who didn’t know about it. Connie asks Daryl to say that they found the supplies but not who hid them. He syas he understands and signs the symbol for ‘family’. Connie communicates to him that she and he are family and makes the same sign. Awwwww. She really does like him and he trusts her which is a lot for Daryl. 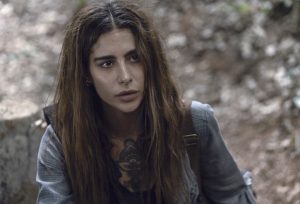 Meanwhile, Yumiko and Magna have it out again and magna lets her know that she resents Yumiko from pre-apocalypse times and Yumiko decides that Magna needs to find a couch to crash on.

Ezekiel has been moping around but it’s not just from missing Carol. He reveals to Saddiq that he has thyroid cancer. He shows him a big bulge in his neck. He had family that had the same thing and beat it but that was pre- zombie apocalypse when you could treat it with chemo and other drugs. He knows that this is a death sentence. Saddiq calls Alexandria and tries to get carol on the radio so that Ezekiel can talk to her and let her know but he hangs up the call before talking to her. 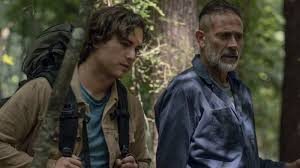 Daryl and Saddiq went looking for Negan but couldn’t find him but someone did! Brandon! His parents were Saviors who died in the war between Ricj Grimes and The Saviors. He now lives in Alexandria but he’s heard the tales of Negan and he is full on star struck. Negan puts up with it but is clearly annoyed.

Zombie Kill Of The Week! Negan uses barbed wire to slice off a walkers head and then stomps on it for good measure! Then Brandon presents Negan with a gift; a new Lucille!

“You like it, right?” Brandon asks.
“Does pig shit stink?” Negan answers.

They hear some screaming and come to the rescue of a young woman and her young son. We get another gruesome Negan kill using a door! “Classic Negan!” yells Brandon. Negan tells Brandon to go home, back to Alexandria. When Brandon doesn’t take the hint, Negan makes it more clear. He doesn’t want or need his company. He takes the young boy under his wing and he bonds with the young boy by teaching him then art of “nut tapping”. It’s a great scene and you see a different side of Negan, albeit, he is still very much Negan. He tells the boy that he will take him and his mother to a place that will take them in and where they’ll be safe. But first they need some wood for a fire for the night and they’ll head out in the morning. 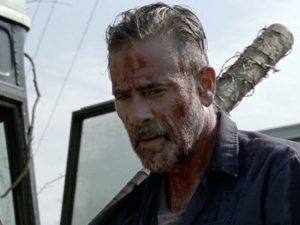 But when Negan returns with the wood he finds that Brandon has returned and has killed the mother and her son. He’s proud of it! He thought that Negan was testing him when he told him to go back to Alexandria. He says this is just what Negan would have done, right? And look at all the good stuff they got now! Negan is pissed! He picks up a rock and just as Brandon yells out “We are Negan!” Negan smashes his head in and proceeds to pound it to a pulp. Negan’s past sure casme back to haunt him. He has changed a lot in the last seven years. He isn’t the same guy that led the Saviors but by the end of the episode we see him in his leather jacket and Lucille on his shoulder. “Little piggy, little piggy! Let me in!” This is what he said the first time he came to visit Alexandria. He summons a group of walkers which he proceeds to take out one by one with Lucille until one of them throws him down. It’s Beta. 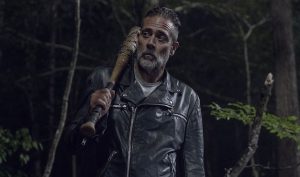 “All right you big ass freak, let’s do this” Negan says to Beta.

It was interesting to see that this young man was such a Negan fan. After all this time! He even did the whistle! Negan acted like a rock star stuck in an elevator with a super fan.

Man, Ezekiel continues to have a run of bad luck. This is the first instance on the show that one of the characters must deal with getting cancer in the apocalypse. Should be interesting to see what kind of creative treatments they come up with.

I’m not so much interested in the Yumiko-Magna relationship. Hopefully, they don’t spend too much time on this.