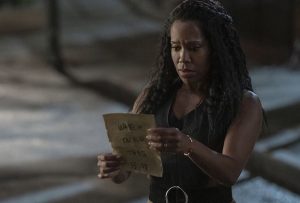 “Nothing Ever Ends” Adrian Veidt

Look, you will need to have patience in these first few episodes as information gets doled out seemingly willy nilly but I assure you things will come into focus and you will be amazed. 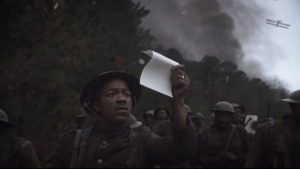 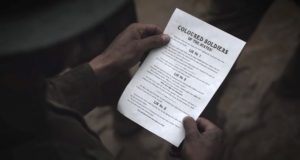 The opening segment shows a German officer in WWI who draws up a propaganda flyer targeted at black soldiers. It says that they are unwanted in their own country and that Germany has no such prejudice against them. The soldier from the first episode who gets his little boy to safety, saved one of these fliers from the war and writes on the back of it “Watch Over This Boy” and stuffs it in the little boy’s jacket. That little boy is now 105 year old Louis Gosset Jr., his name is Will and he is holding that flyer when Angela finds him by the tree where Judd has been hung. He claims he did it but Angela doesn’t believe him and neither should we right? Instead of arresting Will she takes him to the bakery. 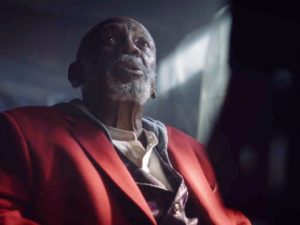 “He had skeletons in his closet” Will

We already know that Judd is not what he seems from the first episode. He was doing cocaine during family dinner! He din’t like Black Oklahoma because they didn’t have enough spirit. If Judd is to Watchmen the Series as The Comedian was to Watchmen the Graphic novel and Film then Judd does have some skeletons and they will surprise Angela.

During the course of the episode Angela goes through her stages of grief and eventually starts thinking, was Judd not who I thought he was. We see a flashback to White Night, the night that the Seventh Calvary targeted 40 cops and attacked at the same time. Angela and Judd survive. Every cop resigned out of fear which is why cops now wear masks and Angela became Sister Night. Judd and Angela bonded after that and became like father and daughter it seems. 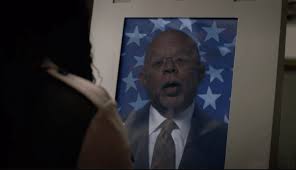 Angela tries to figure out who Will is and goes to a memorial where she interacts with a digitized Louis Henry Gates who is now Secretary of State. She takes Will’s DNA from the coffee cup he was drinking from and submits it to find out more about him. 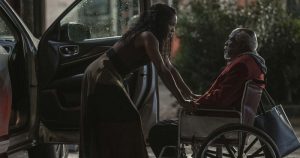 When Angela goes to comfort Judd’s wife, Jane (Frances Fisher) she finds a full house of people including young Senator Joe Keen Jr. (James Wolk) who has presidential aspirations. Angela faints seemingly from grief but it was just a feint to snoop around the hosue and boy, did she find something. Talk about a skeleton in his closet! She finds a KKK outfit, complete with police badge attached. She confronts Will about it, asking if he planted it there. He’s in a wheelchair, which he points out to her, couldn’t have been him. While she’s arguing with him she gets a call with the results of the DNA test. Another bombshell! Will is her grandfather! She decides to finally officially arrest him and takes him out to her car. But before she can get in a spacecraft of some kind comes along, drops a big magnet on the car and whisks it aay with Will in it. What the hell!!! Who was that? Doesn’t seem likely that this was Seventh Calvary, they don’t seem that technologically advanced. Angela is left staring up at the sky in disbelief. The audience stared at their TV screens in disbelief as well. 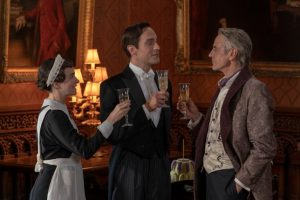 In other news, we get more bizarre scenes at Veidt manor. We get to watch Veidt’s play “The Watchmaker’s Son” performed by his odd but loyal servants Mr. Phillips and Ms. Crookshanks. It tells the story of how Jon Osterman became Doctor Manhattan. He forgets his watch in the de-atomizing chamber and is zapped1 In this play, Veidt uses an old fashioned detonator and sets poor Mr. Phillips on fire! Tears from Ms. Crookshanks and down from the rafters floats down Doctor Manhattan who we discover is also played by Mr. Phillips? Yes, our suspicions were confirmed. Phillips and Crookshanks are robots or cyborgs or Lord knows what.

So looks like Angela’s kids are actually her old partner’s children. He and his wife were killed on White Night and she took them in. 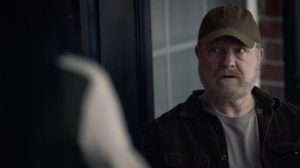 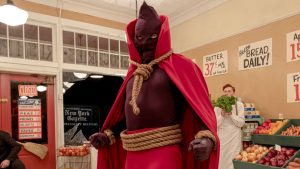 We get to see an episode of American Hero Story! This one is about Hooded Justice and it’s pretty damn awesome (and violent). 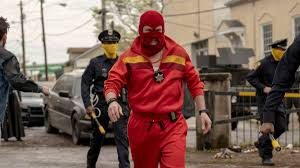 In a scene of vigilante anger Red Scare leads the cops on an assault on an all white trailer park with a giant statue of Richard Nixon. Nobody is in charge now that Judd is gone. 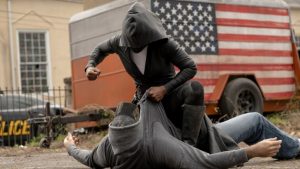 1 Judd was a double agent!

2 We will see a Westworld crossover!

3 Holy shit! Judd’s not dead! Veidt made a robot eouble!

4 Who whisked Will away? Had to be Veift, right?

5 The baby that young Will saved in the first episode is Angela’s great grandmother.