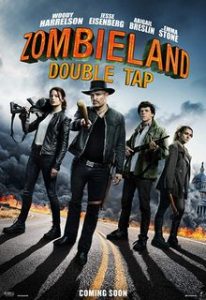 When Zombieland came out 10 years ago I wasn’t so sure about it. I liked the cast but it looked like it might be silly. Well, it was a little silly but it was also really clever and more importantly very funny! The cast had great chemistry and the Bill Murray cameo is one the all time classic funny bits. Jesse Eisenberg went on to become an Oscar nominee for The Social Network. Emma Stone went on to win an Oscar for La La Land. Woody Harrelson went on to do True Detective. I never thought a sequel was even a thought. But damn if the powers that be determined that we needed more and the entire original cast was up to getting knee deep in the zombie killing muck. 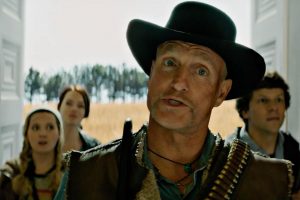 In the last 10 years our leads have survived and bonded as a normal family. Tallahassee (Harrellson) has become a father figure to Little Rock (Abagail Breslin) who is seeking to leave the nest. Ohio (Jesse Eisenberg) and Wichita (Emma Stone) are a couple that are in a rut. When Little Rock hits the road and hooks up with Berkeley (Avon Nogia) it sets the show in motion and we meet several new characters. 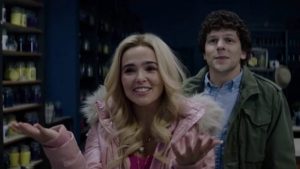 The best of which is Madison ( Zoey Deutch) a dippy blonde Ohio meets in the mall. She could have been a cliche but Deutch plays her do well and milks every ounce of humor out the part. It’s no surprise that Deutch is the daughter of Lea Thompson and director Howard Deutch (Some Kind of Wonderful). The story is simple, the action is fun, the finale is exciting and the whole thing is laugh out loud funny! 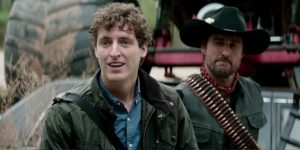 I was worried that after 10 years this sequel would be called in and stale. Anchorman 2 was that kind of disappointment. But up my surprise, Z2 delivered big laughs and introduced new characters that added to the story and to the returning lead characters. It helps that Z2 doesn’t take itself too seriously and is able to poke fun at itself and even take a shot at The Walking Dead.

Woody Harrelson expands on his character and is given a love interest (Rosario Dawson). The Zombie Kill of the week is even better than ever. There are even new evolved zombies that create problems for our heroes. They’re getting harder to kill! And for those wondering if Bill Murray could possibly be back for another awesome cameo all I can say is, stay for the credits.