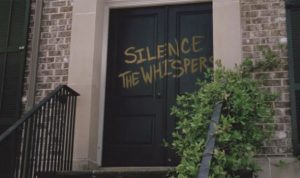 There were several story threads running through this episode which I’m sure will get their own episodes before the season is through. This week it’s Hilltop’s turn to have a walker problem. Another strong episode. New show runner Angela Kang has got the show back on track with good story telling and good character development. I still miss Rick, though. 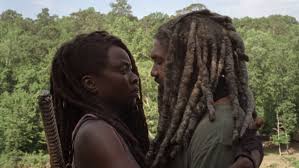 A huge tree falls and crashes through the walls of Hilltop. Walkers started pouring through!!!
This triggers Ezekiel to have a meltdown. He gets so down that he contemplates suicide! Good thing Michonne finds him before he jumps off that cliff. This is where that kiss comes in that caused so much controversy when the promo was released at Comic Con. It turns out this wasn’t really a romantic kiss. Michonne conects with him over the loss of Carol and Kingdom and at this vulberable moment he kisses her. So calm down, people! She hasn’t betrayed Rick!

Magna, Yumiko, Luke, Connie and Kely assemble like the Avengers outside the walls to fight off walkers. For some reason, when it comes time to retreat, Magna refuses to leave. Yumiko finally drags her away and we later find out that Yumiko used to be Magna’s lawyer, presumably how they met 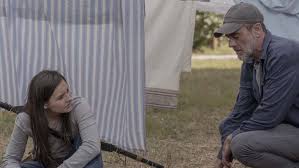 In Alexandria, everyone is paranoid about The Whisperers which means Lydia is getting even more nasty looks and harassment. She’s about had it. Negan seems to be her only friend. They can relate to each other, both being unwanted outsiders. They are each some kind of trophy from past battles. How do you not see them and remember the horrible things that happened before? How can you move on? Lydia triggered the most horrific moment in the whole show, granted she didn’t actually do the deed. Her mom did and her mom is still a threat. I get it. Daryl tries to bond with her but she’s not feeling it. 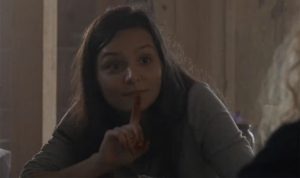 When a trio of Alexandrian punks actually attack Lydia, Negan comes to the rescue and accidentally kills one of them. Immediately the council debate giving Negan the death penalty. Aaron, whose life Negan saved last week, votes to hang him! Daryl votes against, beleiving Lydia who says it was an accident. The swing vote comes down to father Gabriel who needs to sleep on it. But Negan doesn’t wait around for the verdict. He escapes1 Lydia claims to have let him go but she says that so that they lock her up in Negan’s cell. At least it will be safer for her.

Now that The Negan has been released what will he do? Looks like in the the next episode we’ll find out.

We get a steamy love scene between Magna and Yumiko! It’s unbeleivable to me that there hasn’t been more hanky panky happening in the apocalypse. I can only think of two other scenes in the whole 10 years (Glenn and Maggie -Season 2 – Abraham-Rosita – Season 4)

I loved seeing Michonne and Judith fighting side by side, each with their size appropriate katanas! Michonne is confiding in Judith too, discussing problems openly with her and hearing her take. Judith is being groomed to be the future leader. What carl should have been!!! 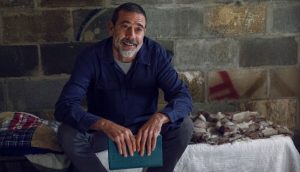 1.  Yumiko was Magda’s lawyer in an assault and battery case pre-apocalypse. 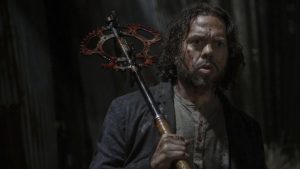 3 Negan will infiltrate The Whisperers camp as a double agent, befriend Beta.

4 Lydia will face off against Gamma