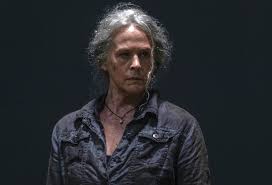 Things got very hallucinogenic fast! This was a Carol episode but The Negan was finally released! And we did get some juicy scenes between Negan and Aaron.

The episode started by showing a montage showing a never ending attack of walkers on Alexandria. Hour 4. Hour 8. Hour 12. We kept seeing scenes of our friends battling walkers. At first I thought, oh, we’re going to see some of this and then they’re going to doible back and show us how we got to this place but they didn’t. They kept going. Hour 24. Hour 30. Were they being sent by Alpha? Lydia doesn’t think so. Eventually gamma shows up and says Alpha wants a meeting at the border, meaning the place where the 10 posts still stand that had the heads mounted on last season. Michonne agrees and takes a small group with her including Daryl and Carol. 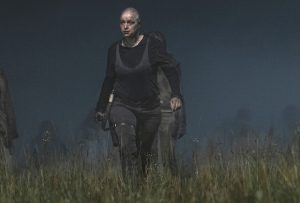 “There is one rule between our people. One law: Stay where you are. Yet, you disobey.” Alpha

Carol hasn’t been sleeping, taking speed to stay awake and it’s affecting her judgement. She has become overwhelmed with thoughts of revenge. She hides a gun in the back of her belt and when faced with Alpha, who taunts her by saying that Henry called out her name when she chopped off his head, she pulls it out and takes her shot. Michonne gets there first and grabs her arm, causing the bullet to hit the ground. Alpha was in a forgiving mood, being a mother, too. She knows that they have crossed their land three times! How does she know that? She does. She says she down’t want retribution she just wants more land. Michonne can only concede and move on. But on their way back to Alexandria, Carol thinks she sees some Whsiperers. She shoots at them. The group decide to take refuge in a nearby school until morning. This is where Carol has a trippy night. 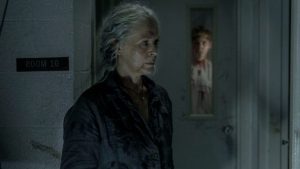 Daryl starts opening up to her about how his dad was a truck driver and he took pills to stay awake. He’s worried about Carol but she keeps popping pills and goes on patrol. But her sleep deprivation is causing her to lose time and sees hallucinations of Henry. Eventually she walks into the gym and steps into a trap, gets lifted into the air upside down. Bad time for a group of zombies to wander in looking for a pick up game! Carol manages to become a ‘reverse pinata’ and kills walker after walker before cutting herself loose. By the time Daryl comes Carol has finished them off but she has a chunk of glass in her arm. When the time comes for Saddiq to pull it out he has another PTSD attack and his new assistant, dante sees this, takes over and covers for him. I’m still not sure if I like this guy or not. 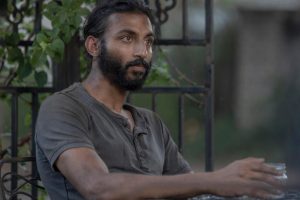 Carol finally gets some sleep and dreams of domestic bliss with Daryl and of course, Henry is sitting at the breakfast table. She doesn’t want to sleep because she dreams of Henry but even awake she is seeing Henry. She asks Daryl if he believes that she saw those Whisperers and he gives her a half-hearted yes. At the very end of the episode we see the bodies of walkers that Carol killed in the gym and tracks out of the gym and stops on a body that is obviously a Whisperer. They open their eyes and have obviously turned. So Carol got one!

“Or what cowboy. Ah, you know what I see? I see someone that’s pretending. Come on, man, let’s go.” Negan

The other story in this episode deals with Negan who Father Gabriel enlists to help fight the onslaught of walkers despite Aaron’s protests. “Peanut butter (Aaron) meet Jelly (Negan) as Father Gabriel exclaims and Aaron reluctantly takes Negan on patrol. They battle walkers side by side but Aaron will only allow Negan to use a broom stick while Aaron has fashioned a mace to his stump. Aaron hates Negan, blames him for the death of his boyfriend, Eric. Negan counters that maybe Aaron should have taken better care of Eric. Then Aaron brings up Negan’s wife. They get face to face but refrain from coming to blows. Eventually Aaron gets some hogweed in his eyes and is blinded. Negan disappears. Come nightfall, Aaron comes across a house and there is Negan, calmly sitting in the dark. Aaron is overcome by walkers and Negan comes to his rescue. They stay there til morning and by then Aaron has regained his sight. They come to an uneasy truce. Their scenes are exciting and fun, mostly to see the danger and menace of Negan re-emerge. Obviously, he will be very useful down the line when the war with The Whisperers goes into full swing. 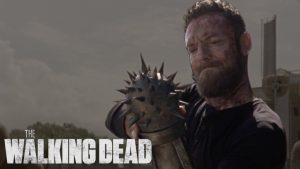 Aaron’s mace arm is awesome! Reminiscent of Merle’s ‘knife on a stump’!

It’s amazing that only Carol and Saddiq are suffering from PTSD. They should all be on sedatives at this point. 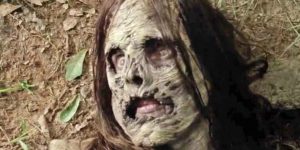 That last scene showing a Whisperer open it’s eyes to reveal that it had turned had me confused at first. Now I see that it was proof that Carol did see Whisperers and that she killed one. Believe Carol! (Even though she’s acting a little crazy)

The book carol sees on the floor in the school showed a family with 4 children, 2 girls and 2 boys, representing the children carol has lost over the years.

Daryl has spoken more in these first three episodes than he’s spoken in the last three seasons! 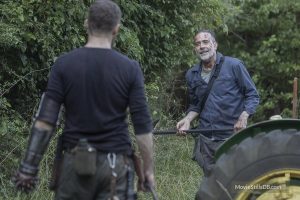 1 Negan and Aaron are going to become pals!

2 Aaron will die saving negan in the season finale.

3 Look, Eugene will end up with Rosita by the end of the season. She can’t be with Father gabriel and Saddiq is falling apart.

4 That Hogweed that blinded Aaron could come in handy if they can weaponize it. I’m talking to you, Eugene!

5 I don’t know a lot about Gamma but I have a feeling she has a plan that doesn’t include Alpha or Beta.