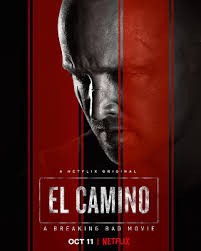 The series finale of Breaking Bad was perfect. It was as perfect as a series finale could be. Walter White set things right, got some revenge and freed his old friend, Jesse who went screeching off into the night, screaming joyously! Free! He’s free! 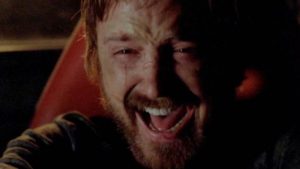 But, what would happen to Jesse? At the time, Vince Gilligan imagined that he’d be caught and face an official comeuppance but that just didn’t feel right. Jesse has been through so much and manipulated and used, first by Mr. White then Gus Fring and even Hank Schrader which led to his imprisonment with the Nazis and Todd. So Vince Gilligan came up with a story for Jesse that would tie up loose ends that would, hopefully satisfy fans of the show and if Jesse. Well, El Camino does just that. 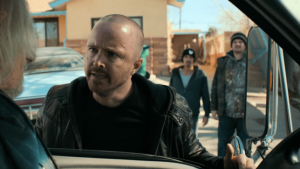 There is a short recap of Jesse’s life to date via Breaking Bad clips and you’re reminded just how bad he had it! The movie picks up right where we last saw Jesse, screaming for joy as he drive off in the El Camino. But we see now it wasn’t really joy. They were howls if pain and agony. The films shows Jesse’s attempt to get out of town and alluding the cops. He has nothing, no money, dirty clothes and a lot of anger but he has s plan and with the help of done old friends he puts his plan in motion. Vince Gilligan has written a very exciting and realistic tale while throwing in surprises here and there. We get a lot of flashbacks, mostly of Jesse with Todd but also with other favorites. These are new scenes filmed just for this  movie. It’s shot in that familiar Breaking Bad photography and Ruth the familiar score that echoes the original show but is definitely new music. I liked that Gilligan didn’t try to do too much here. It isn’t fantastical. It’s methodical abd reasonable and very suspenseful and edge of your seat viewing.

Aaron Paul is excellent. It’s his show and he carries the load well. We also get to see Robert Forster in his final performance. It’s a good swan song. There are lots of other surprises that I don’t want to spoil for you. Just stay alert and keep your eyes open for all the nice, little touches that Gilligan slips in. This may be the last piece of the Breaking Bad story and if it is, it is a fine addition and a satisfying coda.