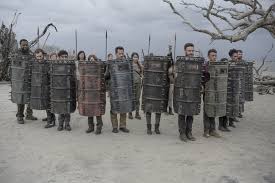 I’m still watching! Are you? If you are then you’re a true fan and you are being rewarded for your loyalty. Angela Kang took over as show runner last season and her fresh take on things have really helped. I hate losing Rick last year and we will lose Michonne this year but Maggie comes back next season and we’ll probably see the Rick Grimes Films starting in the Spring. But for now we have the OG show and it’s still going strong. 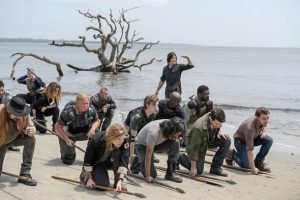 The opening scene had me wondering if I had it on the right channel. A Russian satelite floating through space starts p;ummeting to Earth. We will see it hit the atmosphere three times from three different groups on the ground. It starts a large forest fire that brings everyone together to fight and keep from reaching Oceanside. Of course at some point they are attacked by walkers and we get to see our heroes slay them in glorious slow motion. Eugene, or as Luke (Dan Folger) calls him, “Eugenius”, convinces Michonne to allow him to bring part of the downed satellite with them to mine it for useful data or parts.

I liked the training on the beach! They’ve got shields, they’ve got spears, they’ve got archers! They take on a boat filled with walkers in a very Roman army type way. This scene I suspect is foreshadowing how they will take on The Whisperers at the end of the season but The Whisperers will be moving faster and it won’t be as easy. 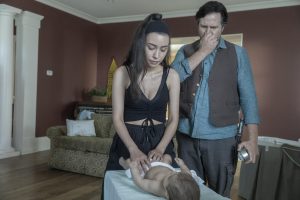 The comic relief was watching how Eugene took care of Rosita’s baby while also conducting scientific research into how many times he poops and even how many times he smiles a day. Rosita, meanwhile is working out and getting back in fighting shape. Father Gabriel looks serious throughout. Siddiq is showing signs of PTSD. He was there when Alpha beheaded his friends! Of course he’s damaged. 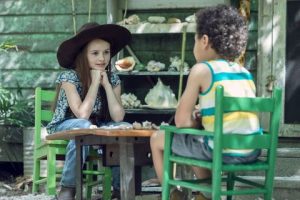 The Brave Man On the Bridge. What a lovely tribute to Rick Grimes! Judith tells the story to little AJ about how the Brave Man saved his friends by blowing up the bridge filled with walkers and sacrificed his life. Judith is now a trusted warrior as well. She was right there on the beach with her Katana! 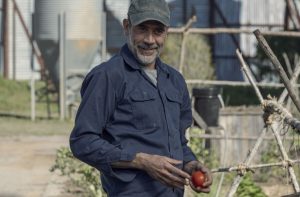 Negan is being allowed out of his cell now. He’s tending to the garden just as he was in Carl’s vision. It looks like he will be befriending Lydia this season. No one trusts either of them. Negan has a nice scene with Father Gabriel. He sees what’s happening with the re-emergence of The Whisperers. He gives solid advice and I’m sure Gabriel is going to see that Negan will be useful in a more meaningful way than picking tomatoes in the future. 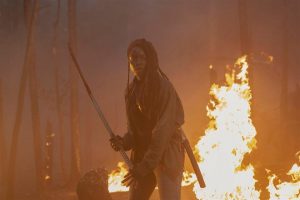 Michonne is definitely the leader of the whole shebang. She will be the one orchestrating the battle strategy against The Whisperers. Danai Furira is leaving the show after this season and it’s still a mystery how they plan to do it. Could it be in battle? 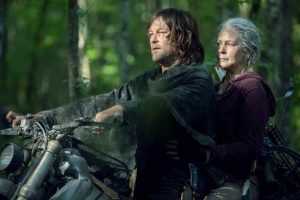 The main event, of course, was Daryl and Carol. We see Daryl and Ezekiel waiting on the dock as Carol sails in on her boat. She’s been on the high seas! Ezekiel is so happy to see her but their reunion was a bit awkward. Meanwhile, she runs into Daryl’s arms! They get on his motorcycle and ride into the woods then go hunting. They take a break and call each other besties and Daryl even makes friendship bracelets for them. They talk about just going away together and being free from everything. But…..then. After putting out the fire they wander over to the valley where Alpha kept her horde of walkers and they are no longer there! Where did she move them? 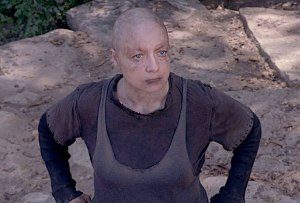 Daryl walks away but Carol stays behind and wouldn’t you know it, out of the brush down below, Alpha emerges. Carol and Alpha have a classic stare down. And you KNOW it will be going down before the season’s over!

Michonne mentions they haven’t had any letters from Maggie in a long time.

Daryl has a book on Sign Language in his back pocket

Who is that weird doctor that interacted with Saddiq? He was creepy!

Aaron is going to become a hothead this season!

We all need friendship bracelets like Daryl and Carol! 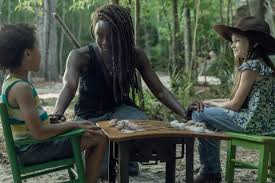 1 Carol and Alpha will have an epic showdown

2 Negan and Beta will have an epic showdown

3 Daryl will get together with Connie not Carol

4 Siddiq’s ptsd will have serious consequences for someone

5 Ezekiel is expendable this season