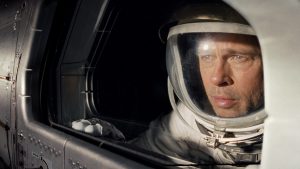 James Gray’s existential space journey reminded me of Francis Ford Coppola’s Apocalypse Now (1979) or perhaps more precisely Joseph Conrad;s novel Heart of Darkness which Apoc Now was based on. Ad Astra actually mixes in ingredients from several films and mixes them together to create an intoxicating space dish that’s beautiful to look at if not completely satisfying to the taste buds. 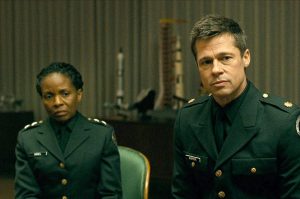 The film takes place in an Arthur C. Clarke type future with giant space antennas and casual trips to the moon complete with satirical jabs but sans the classical music. Brad Pitt plays Major Roy McBride, a stoic, veteran astronaut who is having marital problems and daddy issues and is having his mental state closely monitored. He’s tasked with a mission to find his missing father (Tommy Lee Jones) long thought dead but who is now though to be creating space havoc via surges that are dangerous to life on earth. This scene is right out of Apocalypse Now down to the dossier with old pictures of Jones. 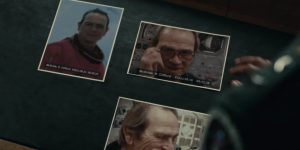 The first step is to head to the moon with an old associate of his father’s, played by the affable Donald Sutherland. McBride’s journey “up river” begins. The conflict within McBride is amplified by his continuing sessions with an AI psychotherapist where we learn that he is contemplating the meaning of life and whether it’s worth going on. 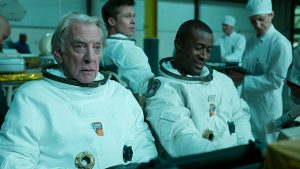 There are several exciting set pieces and a few shocks as we go along without being manipulative although I kind of which they were. These scenes play out without much hype which leaves the pace of the film too static. A battle on the moon, a swim through an underwater Mars river, a struggle on a spaceship about to blast off into space. Well done but I wish they had been punched up a little.

McBride meets people on his journey that both try to help and hinder his success. Donald Sutherland is a close friend of his father who iss ent ot keep an eye on McBride. He gets a life from the moon to Mars on a space ship with a friendly crew of four (including Loren Dean and Kimberly Elise) who seem like they done this trip a thousand times. Again, reminiscent of the boat of colorful characters going up river in Apocalypse Now only these characters are not as colorful or fleshed out. I wish they had been given more interaction with McBride to set up what comes later. 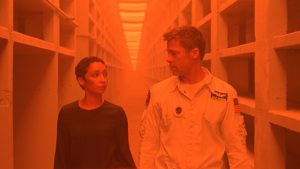 There’s a short turn from Ruth Negga as an ally on Mars who has a personal interest in the success of McBrides mission. Then, you have Tommy Lee Jones, McBride’s father, who’s this film’s Colonel Kurtz. Is he crazy? Is he responsible for the space surges hitting Earth? Will McBride find any resolution to his daddy issues? It’s all fascinating but I wish they had spent a little more time with father and son. It feels like we get to see the beginning and end of their scenes but the middle is missing. 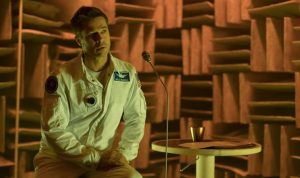 Jones is wonderful, underplaying and being very effective in his scens with Pitt. But this is Pitt’s show and the whole film rests on his shoulders. He does the heavy lifting and he makes it look easy. He is very good in this and he keeps this film interesting and the audience engaged. His performance is a nice companion to Once Upon A Time in Hollywood in that he shows his range and his bona fides as a movie star. You also feels that this film is very personal for Pitt, the themes of a broken marriage and self reflection and trying to get his life back on track. The film feels like it was cathartic for Pitt as much as for his character. 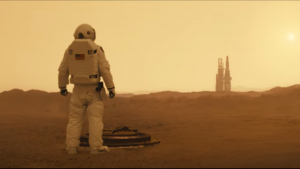 There are bits of Gravity, 2001, First Man, of course Apocalypse Now and even some Space Cowboys!  Three actors from that Clint Eastwood directed film star in this movie, Tommy Lee Jones, Donald Sutherland and Loren Dean. I enjoyed the film and Pitt’s performance and I will most likely watch it again. I wish that it had taken advantage opf its more excotong scenes just to give the film pulse points. It moves at a very deliberate pace. This will work for some people but others will find it slow.