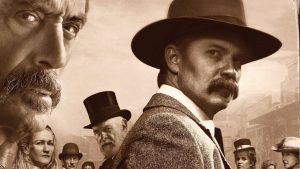 “Hearst won’t take long before he honors the rigors of his putrid f*cking nature.. You murdering, thieving, c*cksucker.” Al Swearengen

I loved Deadwood the series which ran on HBO from 2004-2006. Only three seasons but each one was better and richer than the one before. The dialogue was stylized and magnificent, a kind of western Shakespearean poetry that I’d never heard before. Of course, there was a hint of it on NYPD Blue if you watched that show in the 90s. They were both written by the same guy. David Milch. 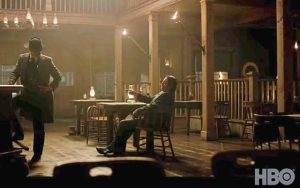 “Saloon is a sanctuary, every man worth the name knows the value of being unreachable” Al Swearengen

Deadwood ended suddenly after season three and for no good reason. It cost too much? Really? We just watched Game of Thrones which cost $10 million per episode! But 2006 was a long time ago. Things change.

“Before eyes close for good and all I’d once again see my Joanie Stubbs and show here a sign of… loving regret from Calamity Jane to her darling… and too at the grave of Wild Bill.” Calamity Jane 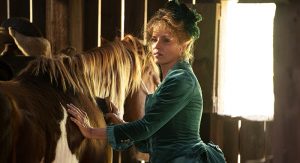 Deadwood the Movie takes place ten years after the events of the last episode in 2006. South Dakota is about to celebrate statehood! George Hearst, now a senator from California, is in town to help commemorate the occasion and to do what he does; buy up land and murder innocent people. He’s a great villain. Seth Bullock (Timothy Olyphant) is still marshall, still married to Martha (Anna Gunn) and with three little kids. Al Swearengen ( Ian McShane) still runs The Gem but he’s feeling poorly. And trouble is a brewing.

“What a grand surprise after such a piece of time.” Charlie Utter 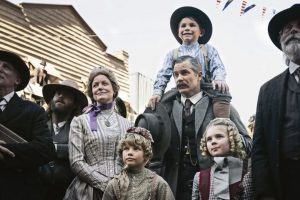 Every actor from the original show, that is still alive, is in this film. Trixie (Paula Malcomson) is as feisty as ever to hr own detriment. Wu (Keone Young) still can’t speak English but his son, Young Wu speaks it fluently. Joanie Stubbs (Kim Dickens) now owns the Bella Union, Doc Cohran (Brad Dourif) is still cranky and EB Farnum (William Sanderson) is still out upon. Even Garret Dillahunt who played two different characters in the original show (both were killed) has an uncredited cameo. None of it feels forced or phony. These actors just slipped into these characters’ skins as effortlessly as putting on their socks. Amazingly everyone gets their moment and it’s very moving. 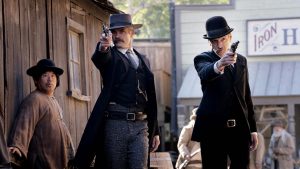 There was a lot of anticipation for Deadwood The Movie and anticipation often leads to disappointment (see Game Of Thrones). But Deadwood The Movie does not disappoint. David Milch tells a simple story that brings everyone back together one last time. The film is filled with powerful and wistful moments. James riding back to town, riding back for Joanie. Swearengen walking Trixie down the aisle. Bullock seeing Alma again, their eyes filled with love. Jewell and Al singing Waltzing Matilda. It ends, as it should, with AL Swearengen. As he lies in his bed being tended to by Jewel (Geri Jewell) and Trixie, starts reciting The Lord’s Prayer and Al isn’t going to have any of it. 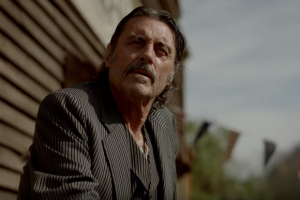 Trixie: Our Father, which art in Heaven…
Al Swearengen: Let him f*cking stay there 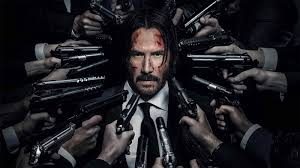 If you’ve seen the first two films you’ll sail right into this one as the violence begins immediately and never stops! There are references to breaking the rules, and hurting dogs and gold coins and markers and loads of flowing blood and broken bones. 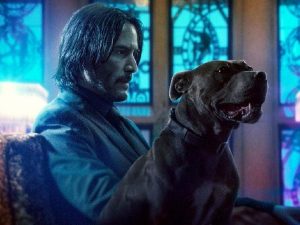 The plot is simple. At the end of JW2 our hero broke a major rule. He killed someone in neutral ground, specifically, on the grounds of the safe haven for assassins, The Continental run by Ian McShane. He’s given an hour head start and then a worldwide contract is out our on his head. It seems everyone and their mother is an assassin in this world. JW is on The run with his new dog and trying to survive. 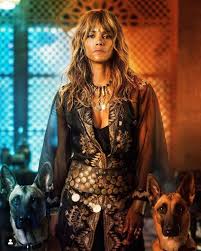 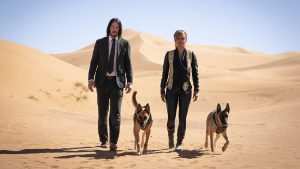 The rest of the movie is just an excuse for some amazing fight sequences sprinkled with healthy amounts of humor and gore. Keanu Reeves is perfect for this part. He doesn’t have to do more than look like his ulcer is flaring up. There are some good cameos by Halle Berry, Angelica Huston and Jerome Flynn (Bronn of Game Of Thrones) and strong support from Ian McShane, Laurence Fishburn, Lance Reddick and Asia Kate Dillon (Billions). 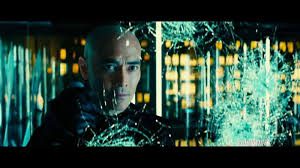 Some of the best bits happen between Reeves and Mark Decascos as a hit man called Zero. Decascos really seems to be having a ball! Directed by Chad Stahelski as he has the previous two, the movie zooms along like a freight train to hell. 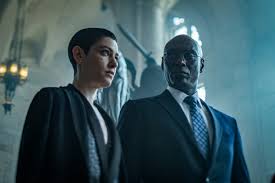 The violence was too much for some of the ladies that I watched with and I admit, by the end I felt that I had had my fill. This isn’t a Tarantino film where the violence is plentiful but the dialogue is deliciously good. This is pure popcorn and guts Summer flick. You won’t remember much after but it sure gets your blood moving.