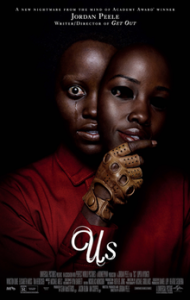 Jordan Peele has crafted a pure horror film that’s creepy and still has a sense of humor much like Get Out but without the clear political dimension. The end reminded me of an M Night Shymalan ending and that isn’t a knock. I’m a Shymalan fan. People may have questions about various things, the rabbits, why do they talk weird, etc., but while other films might need to explain things, a horror film does not. The unknown is part of the horror. People can theorize on their own, that’s part of the fun. 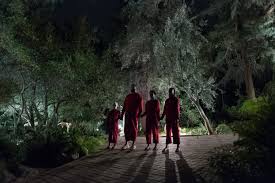 Us is a straight up horror film. The film opens with a young couple and their young daughter enjoying the Santa Cruz beach amusement park. The girl wanders off and ends up in the ‘Fun House’, the hall of crazy mirrors. What happens there is the linchpin for the film. 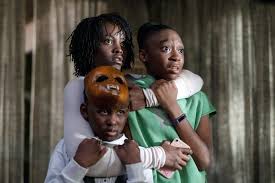 In the present day the little girl, all grown up into the lovely Lupita Nyong’o, and her family wind up vacationing in Santa Cruz and are visited by a very unwelcome group that look just like them only much scarier. And I’ll be honest, I did not see that ending coming! 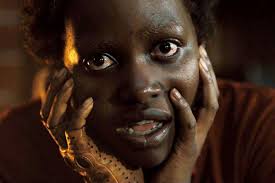 It makes sense that Peele has resurrected The Twilight Zone series once more because Us plays like a longer version of a Zone episode (Think the hour long episodes that made up the fourth season). The photography is beautiful and there are good supporting performances from Winston Duke (Black panther), Elisabeth Moss and the two child actors Shahadi Wright Joseph and Evan Alex but it’s Nyong’o’s go for broke performance that ignites the film into another level.