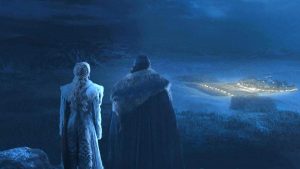 “Everything you did brought you to where you are now. Where you belong. Home” Bran to Theon

Well, I guessed it right! Aya killed The Night King! It was a good guess but an educated one. It would have been too obvious for Jon and Dany to have done it and Arya has been training to be an assassin for many years now. But what really tipped me off was rewetting the show and seeing the episode in Season Three when Mellisandre took Gendry and Arya confronted her. She said, There is much darkness in you. I see eyes staring back at me, brown eyes, green eyes, blue eyes. Eyes that you will shut forever. We’ll meet again” Sure enough they did and Mellisandre said the same line to her, Arya knew what she had to do. What she was destined to do.

This was a great episode! It had me on the edge of my seat and screaming at the screen! Sure it was dark.  It was the dead of night! How could anyone have survived? Impossible but so what? If episode 3 was this good what how good will the next three episodes be? 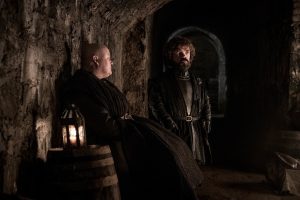 The episode opens slowly, everyone doing their last minute prep. We see Theon and the iron born escorting Bran to the godswoods. Alice Carstark is with them so I am assuming she dies in the battle along with all these people including brave Theon. I was surprised Sam joined the battle. I thought he would be in the Crypt but good for him1 Jon and Dany fly up on the hill so they could overlook the battlefield like the generals they are. And then we see Mellisandre. Wow. That was a surprise. She has Jorah instruct the Dothraki to lift their swords and Mellisabdre does an incantation and sets them all on fire. Jonah and Ghost lead the charge and the Dothraki follow. They disappear in the horizon but when they come face to face with the horde of dead you could see the fear on their faces. The Dothraki are scared! The others watch as all those burning swords dance around like fireflies until one by one they are all extinguished. Wonderful scene. A few horses return along with some Dothraki on foot and Jorah. No Ghost. We don’t see him die but probably so. 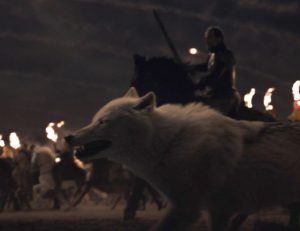 “There’s no need to execute me Ser Davos. I’ll be dead before the dawn” Meliisandre tells Davos.

Then the whole dead army attack. It is so overwhelming. Aya tells Sansa to go to the Crpt and hands her a dragon glass dagger. Dany breaks with the plan and gets on Drogon to start helping and Jon gets on Rhaegal. They start carpet bombing the dead but there are so many it barely makes a dent. Jon has an idea and heads straight for the White Walkers on horseback but before he can take them out the storm comes and we know The Night King has arrived. 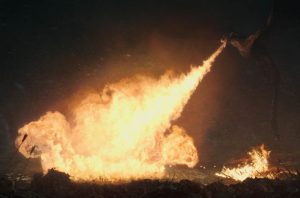 We see all out heroes fighting valiantly and we get our first death. Dolorous Edd. He saves Sam and gets it in the back. Sam watches in horror and then turns and runs! Sansa enters the Crupt and everyone looks at her as if saying “How’s it going up there?”. She looks at Tryion and by the look on her face he knows it’s bad and starts drinking. 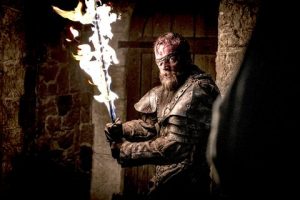 The troops retreat to the castle. The Unsullied protect the retreat, Jon and Dany crash into each other up in the sky unable to see through the ice storm. Some of the Unsullied make it in but Grey Worm has to make a call and yells for the trench to be lit. He collapses the bridge condemning the rest of the Unsullied to sure death. The trench doesn’t light. Dany was supposed to do it but she’s still flying blind. Good thing Mellisandre is there! She starts praying but it the fire doesn’t start. It takes a long time! Wrong incantation? Finally, it works! The wood in the trenches are set ablaze. The dead, eerily just stop and wait for further orders. 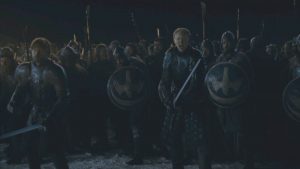 “It’s the most heroic thing to do now, look the truth in the face.” Sansa

Then NK sends the command and the wights start falling into the trench making a pathway for the others to follow. “Man the walls!” Our heroes take positions on the wall and do the best they can but they get swamped. It’s great to see Jamie and Brienne saving each other and fighting side by side. We also get to see Arya kicking some serious ass while her theme music plays and Davos watches in wonder. Then the giant busted through the gate. Little Lyanna Mormont gets swatted away like toy. She is a warrior though. She picks up a weapon and gives her battle cry and attacks . The giant picks her and starts crushing her and with her last breath she stabs it in the eye! They both come crashing down in a heap. I’ll admit, this got to me. Tears were shed. 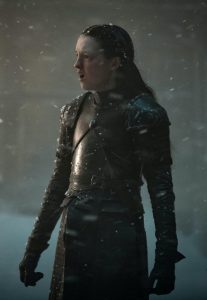 The Hound starts to give up. “We’re fighting death. You can’t beat death” But when he sees Arya in trouble he springs into action and Beric follows. Aya finds herself in a pickle in the library. The dead are just roaming around like they’re looking for a good read. She manages to get out of that room but soon finds herself being chased through the hallways. The Hound and Beric come to her rescue. Beric is mortally wounded but manages to stay with them to momentary safety. He dies as Arya looks on compassionately. Waiting for them, it seemed, was Mellisandre. She said they’d meet again and they have. She reminds Arya of what she saw in her eyes al those years ago. Arya knows what she has to do. 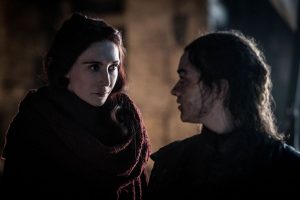 “What do we say to the god of Death? Not today”

The wights start attacking the godswoods and Theon and his men battle while up in the sky we have a dragon battle. NK falls of Visierion. Jon crash lands and rolls off Rhaegal. Rhaegal may not be dead but sure looks injured. Dany targets NK and lights him up but it turns out NK cannot be killed b y dragon fire. If he is a Targaryen that would make sense, with NK on the ground Jon sets his sights on him but before he can reach him. NK does what he did at the end of Hardhome. He lifts his hands and brings all the newly dead back. Jon is surrounded. NK heads for Bran and all the White Walkers enter the castle, 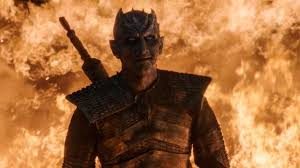 Dany comes to Jon’s rescue and allows him to try to get to Bran but Drogon gets attacked by wights and Dany falls off while Drogon takes flight to try and shake them all off. Good thing Jorah always knows where she is and he comes to protect her. Things start looking really bad for everyone and to top it all off, as we suspected, the dead Starks in the Crypt start bursting out of their coffins, All hell breaks loose down there. 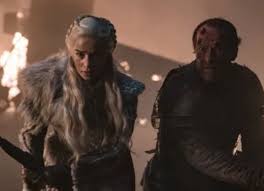 Cue the sad music. We start to think they’ve lost. Jon cannot reach Bran. Viserion has blocked the way. Bran, who had warned into his crows at the start of the battle finally returns to his body to tell Theon that he’s a ‘good man’ and to thank him before Theon makes his suicide run at NK. Then, one of the white walkers feels a rush of air, his long stringy hair russles a little. NK approaches Bran in slo mo and just as he reaches back for his spear we see a figure appear in the top of the frame. It’s Arya, flying through the air, Valerian steel dagger in her hand. NK quickly turns and catches her by the throat but Arya drops the dagger and catches it with her right hand and stabs NK right in the spot where he was stabbed thousands of years ago when he was turned into NK. He immediately shatters into a millions pieces! The White Walkers dissolve in an explosion of ice! Viserion crumbles in a mess of dead flesh! All the wights immediately collapse in a heap of death. It’s over! The living have won! But perhaps the biggest loss of all was being mourned on the battlefield. Jonah dies in Dany’s arms. He died doing the only thing he wanted to do for the woman he loved. he protected her to his last breath. Dany wails over his body as Drogon flies in and wraps himself around them and also mourns with his momma. 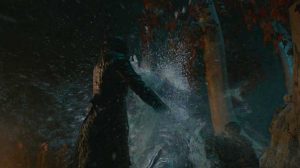 The last scene was interesting. The Hound and Mellisandre exit the castle and into the quiet. She walks out of the castle and past piles and piles of bodies. Davos appears ready to strike her down but he doesn’t. He watches her walk out into the new dawn, removing her magical necklace, throwing off her coat. She starts to revert to her actual form, her long red hair changes to white and she crumbles to the ground. The final death of The Long Night. 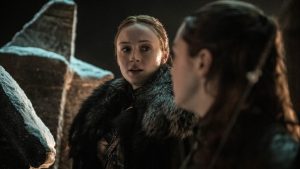 I loved Sansa and Tyrion’s interactions in the Crypt. he always admired her and she him.

“Maybe we should have stayed married” Tyrion
“You were the best of them” Sansa
“What a terrifying thought!” Tyrion

The looks they gave each other when they thought they were goners were touching. Maybe they have a future. 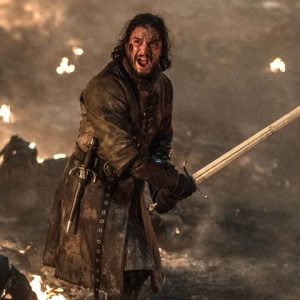 Jon Snow has never been much of a tactician. Sansa saved his ass in the Battle of the Bastards and here Arya saves his ass by taking out NK. Maybe he can take out Cersei?

Look, I’m happy that our heroes didn’t suffer as many losses as we all feared but how in the world did Sam and Davos survive? 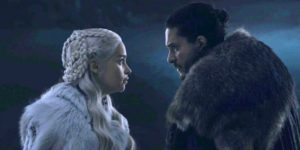 How many troops do Jon and Dany have left? Even with two surviving dragons they definitely do not have enough of an army to take King’s Landing. Dany may now want to burn it all down with the dragons and Jon is going to be against it.

Also, Sansa will be against sending any ’Northerners’ South to fight for Dany. why should she? The North is now safe, Cersei should be forced to march North if she wants. 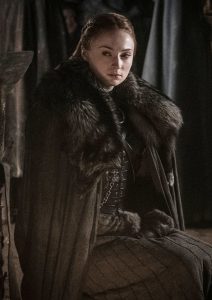 I love that my friend Charlotte, once the war was won, immediately thought about the clean up job that was going to be needed. What are you going to do with all those dead bodies?? Winter fell will definitely need a paint job!

1 Cersei will die in child birth.

3 The Hound kills The Mountain. 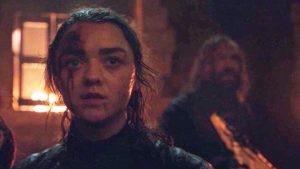 4 Arya and Gentry are going to take things to the next level.

5 Theories going around that Arya could be Azor Ahia, I don’t think so. I think it’s still Jon.