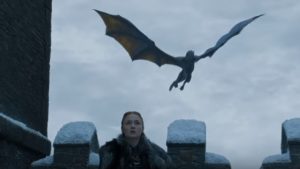 “Winterfell is yours, your grace.” Sansa to Daenerys

After a long wait the first episode of the final season has finally come! It’s filled with delicious moments that fans have been waiting and hoping for. It also includes many call backs to the very first episode. As in the first episode, Winterfell is receiving guests. This time it’s a different King and Queen. Daenerys and Jon and their armies come marching down the street into Winterfell. We see a young boy scampering around trying to get a good view just as Arya did in that very first episode. We see Arya standing by the road with everyone else. She sees Jon! She also sees The Hound who she thought was dead. Is she happy to see him? We can’t tell. We definitely see she is happy to see Gendry. She can’t help but give a little smile when she gets her first glimpse of the dragons. Sansa sees only a threat.. 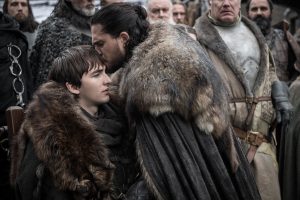 Jon sees Bran for the first time since season one and is overjoyed. Bran is less so. There are several good reactions to Bran’s new oddness throughout. Jon asks where Arya is.

Sansa is not impressed with Daenerys. If looks could kill. The Northerners are also displeased with Jon bending the knee and telling everyone Daenerys is their queen.

“We don’t have time for all this. The Night King has your dragon. It;s one of them now. The Wall has fallen. The dead march on Winterfell.“ Bran interjects. 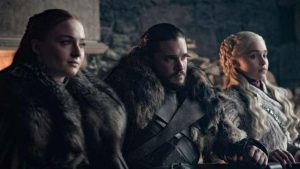 Jon faces dissent at the Winterfell town hall meeting. Even young Lady Lyanna Mormont voices her displeasure. Tyron tries to bolster him but to no avail. Sansa and Daenerys exchange icy glances.

“What do dragons eat anyway?” Sansa
“Whatever they want” Daenerys 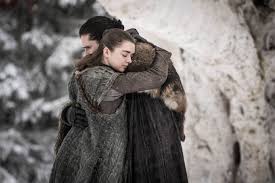 Jon finally is reunited with Arya by the weirwood tree. It’s joyous! He’s pleased that she still has Needle and he lets her hold Longclaw. “Jealous?” he kids her. He wishes she was around earlier to help with Sansa.

“I’m defending my family, so is she (Sansa)” Area
“I’m her family, too” Jon
“Don’t forget that” Arya 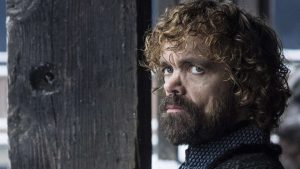 Sansa is reunited with her first ex-husband, Tyrion.

“The last time we spoke was at Joffrey’s wedding. A miserable affair” Tyrion
“It had its moments” Sansa

He tells her that Cersei is bringing her army Notth to help fight the dead but Sansa doesn’t believe it for one moment. “I used to think you were the most clever man there was” she tells him and then walks off. Sansa is not suffering fools easily this season. 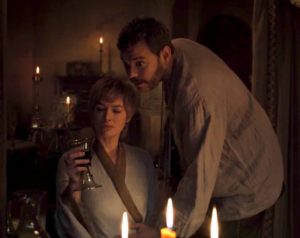 “I have bad news your grace. The dead have broken through the wall.” Qyburn
“Good.” Cerise

Back in King’s Landing, Euron still has Yara captive. She’s family after all and who else could he talk to all alone the high seas? Euron has returned with the mercenary group, The Golden Company, 20 thousand strong. The brought horses but no elephants which really disappoints her. Euron continues to try to get in Cerise’s bed and she keeps putting him off but this time she relents and gives Euron what he wants.

We get to see Bron about to bed three women who can only talk about the dragon and the men they knew who were killed or maimed. Bro just wants to get laid! The Qyburn walks in with a message from Cersei. She wants Bron to kill Jamie and Tyrion if by chance they survive to return to King’s Landing. She even provides a crossbow for him to use, the same as Tyrion used to kill his father. 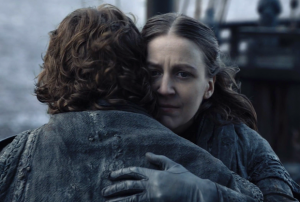 Then makes his rescue of Yara who promptly head butts him, for not fighting harder when Euron took her. But she helps him up and off they sail back to The Iron Islands. If things go bad for Daenerys and Jon they will need a place to retreat to where the dead can’t reach them, so what better place then The Iron islands. He wants to go to Winterfell to fight for the Starks and she tells him to go. 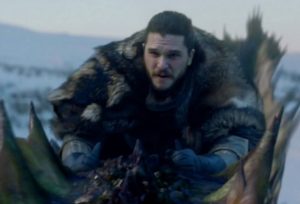 Davos speaks with Tyrion and Varys about what to do to get the Northerners to trust Daenerys. he proposes she marry Jon who is much respected and trusted. Deanerys complains to Jon about Sansa who she can tell doesn’t like her, I mean, it’s pretty obvious.

“She doesn’t need to be my friend but I am her queen. If she can’t respect me…..” Deanerys tells Jon before they interrupted by a Dothraki who tells her that the dragons are not eating enough. What is she saying? That she would execute her? No, Jon won’t let that happen, right? 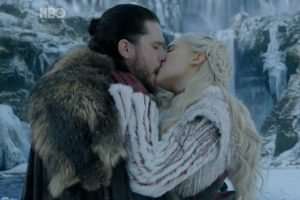 Deanerys and Jon go to visit the dragons and she gets him to agree to go for a ride. His first ride on a dragon1 We’ve been wanting to see this for a while now.

Gendry makes The Hound a huge axe out of dragon glass. He starts in on him when Arya appears and tells hi tho lay off. 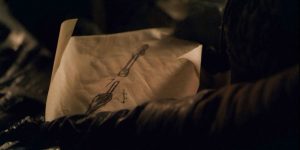 “You’re a cold little bitch, aren’t you? Guess that’s why you’re still alive” The Hound says to Arya before he walks off. It’s obvious he respects her. She hands Gendry a drawing of a weapon she wants him to make for her, Whatever it is it could be pivotal in the battle to come. They also did some heavy flirting but there’s not time for that now!

Sansa receives bad news from Lord Glover. He will not be bringing his people to Winterfell. Sansa and Jon fight about Daenerys.  The Northerners don’t trust her and neither does Sansa.  Then she lowers the boom and asks him, “Did you bend the knee because she would make a good queen or because you love her?” Jon doesn’t answer which is telling. His reasons for abdicating his throne and bending the knee are sound. She has a big army, she has dragons but she offered to help before he bent the knee. he didn’t need to do it to get her help. 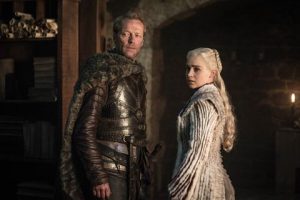 Deanerys and Ser Jorah seek out Sam to thank him for saving Jorah’s life. This gets awkward when she realizes she killed Sam’s father and brother. She tells him and incredibly this is the first he’s been told this. Poor Sam is reduced to tears, it’s heartbreaking. I’ve never seen Sam in so much pain.He runs out of there and out into the courtyard where he sees creepy Bran just sitting out there by himself. Bran says “he’s waiting for an old friend”. Bran also tells Sam he needs to tell Jon about who he really is. 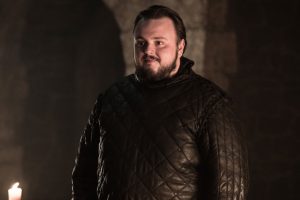 Sam finds Jon down in the crypts lighting a candle at his father’s grave. Another reunion! They haven’t seen each other in a while. Sam, still upset about learning of the death of his father and brother, doesn’t mince words and starts telling Jon what he and Bran have discovered. His mother is Lyanna Stark and his real father is Rhagear Targaryen. His name is Agon Targaryen and he is the heir to the throne! Jon is both shocked and angry. His father was the most honorable man he knew and he was lying to him all along. Sam explains that he promised his sister that he would protect him and that Robert would have killed him if he knew he was a Targaryen. Jon bent the knew, Daenerys is Queen. Sam begs to differ. Sam tells Jon that she killed his father and brother and that Jon wouldn’t have. He makes the argument that he would be a better leader.

“You gave up your crown to save your people. Would she do the same?” Sam to Jon. 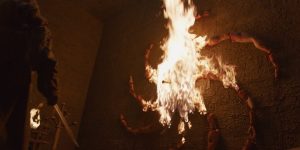 Well, looks like Beric and Tormand did not die at east watch. We see them and what’s left of their gang as they approach the Castle go House Umber. Their has been a battle, lots of blood but no bodies. They venture in cautiously and then hear a noise. They prepare for a battle but it turns out to be Edd and what’s left of the Castle Black gang. Eddy leads boric and Tormand into another room and they see poor little Lord Ned Umber splayed on the wall with a lot of severed legs and arms surrounding him to form that familiar spiral design we’ve seen several times before. Then they get an extra scare when little Ned opens his blue eyes and screams. Brice stabs it with his falling sword and sets the whole human body display on fire. This was a warning from the Night King. 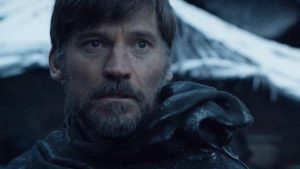 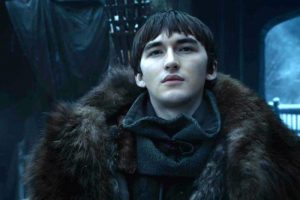 The next morning we see a hooded rider arrive at Winterfell. he dismounts and reveals himself to be Jamie Lannister. He turns to see a familiar face. A young man sitting in a chair, staring at him. he suddenly recognizes him. It’s the boy he pushed out a window at the end of the very first episode! It’s creepy Bran! Holy crap!

There was a lot of humor in this episode but don’t expect much humor un the next few episodes.

“You should consider yourself lucky, at least your balls won’t freeze off” Tyrion to Varys

Grey Worm and Missenei get a lot of strange looks from the Northerners. Perhaps the first time they’ve seen brown people? 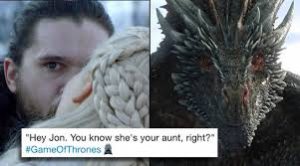 I love how Jon was bothered that Drogon was giving him the evil eye when he was kissing mom!

Tyron tells Sansa that everyone that has ever underestimated her is dead now. Unfortunately, now it’s Jon that is underestimating her. “Sansa thinks she’s smarter than everyone else” he says to Arya. He is going to be forced to make a decision about which family he is going to choose to defend; Stark or Targaryen. This is going to put him in direct conflict with his aunt/lover.

I forgot that Jamie is not only facing Bran again but also Dany. He killed her father! What is she going to want to do to him? Jon may have to talk her out of taking vengeance because we’ve already seen that Jamie ends up fighting for them.

There wasn’t a big Brienne scene. I imagine we’ll get one when Tormand arrives at Winterfell in the next episode. 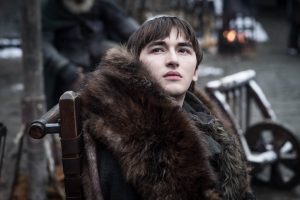 1 Bran will warg into Viserion and bring down The Night’s King! But won’t kill him.

2 We will see Dario Naharis return with the Golden Army and fight Ser Jorah.

3 We will see Cleghane Bowl!

4 Cersei will be defeated but won’t die. 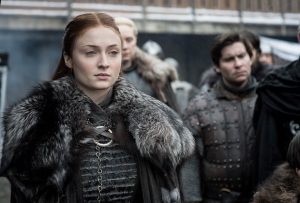 5 Sansa will rule the 7 kingdoms with Arya and Bran by her side.