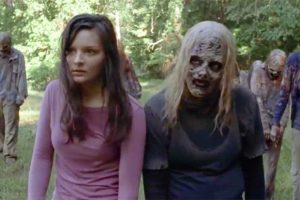 Michonne comes under fire! Rosita tries to round up all her suitors. Henry seeks his Juliet. You thought Alpha was scary? Meet Beta! Is Negan becoming a good guy? Are we OK with that? 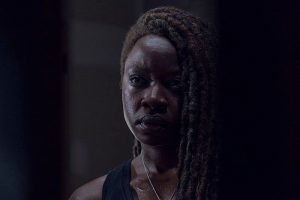 “I know that you just want what’s best for us. But what does it mean for Alexandria to survive if means that the Kingdom falls?” Siddiq
“It means Alexandria Survives.” Michonne

Machine is facing a revolt back at Alexandria. The council wants more say. They don’t like that Nichonne has set it up so that she alone can veto any thing they vote to do. They’re right! She’s set herself up as a dictator just like her long lost love, Rick, once did back in Seasons 2 and 3. They all want to participate in The Fair that’s being sponsored by The Kingdom but Michonne doesn’t want anyone to go anywhere! She has the grieving Aaron’s support but that’s it. 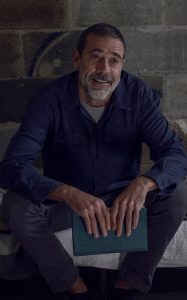 She blamed Father Gabriel for allowing Negan to escape but he, amazingly, came back on his own and is back in his prison cell safe and sound. She confronts him but is met by a calm and reasonable Negan who makes a case for being allowed back into society as her ‘consigliere’ basically. He thinks he can be trusted and useful. Michonne is not there yet. Then, she sees Judith lingering outside Negan;s cell window. 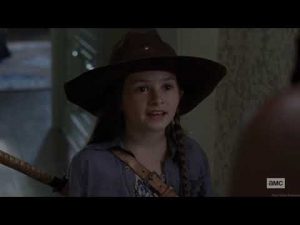 So, next Michonne confronts Judith who admits she’s been talking with Negan. This just freaks Michonne out! She tells Judith she’s to never again go near Negan, that’s he’s a terrible person who killed friends of theirs. But Judith doesn’t know THAT Negan. She says Negan isn’t that person anymore.
“I get why you want to believe that, but people don’t really change.” Machine tells her.
“You did.” Judith zings back.
“Go to your room!” Michonne orders, her head about to explode!

“This is what parents says when they know they’ve just lost an argument with their kid” Ron Funchess, Talking Dead. 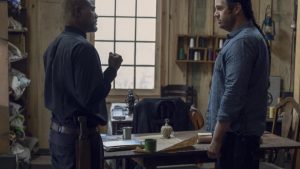 Meanwhile, back on “As Alexandria Turns”, Rosita tells Gabriel she’s prejudgers with Saddiq’s baby and that he will be involved with raising the baby. Gabby is none too pleased. But would he really give up being with Rosita? Eugene doesn’t think he should and offers up some very intricate and funny charts weighing the pros and cons but makes the case that he’d be stupid to dump Rosita! He admits that he’s in love with her and doesn’t quite understand why she loves Gabriel but she does and they love each other so he wants her to be happy. He tells her to go make up with her and even gives him a gift to give to her, a pair of “pantalones for Rosita’s ever expanding bread basket.” Gabriel looks perplexed throughout but he takes the advice to heart and ends up going to Rosita, with the ‘pantalones’, and they and Saddiq all smile at each other and walk into the house as Eugene watches intently outside. This is one weird foursome. 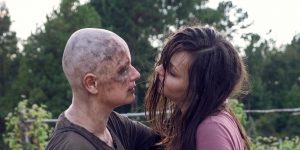 Alpha, with her daughter back in the fold, leads her group back to their camp. It was funny seeing Lydia walking like a walker but without a walker mask. Alpha sounds creepier while wearing the mask than without but proves damn lethal either way. 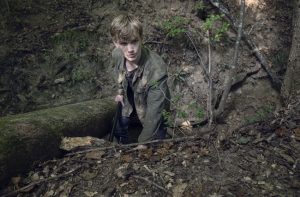 Of course, Henry catches up to them armed with nothing more than his ‘Morgan” styled staff. He is quickly found and rounded up by Beta. Beta is one big, scary dude. he wears a half walker face because most of his face is covered with a ZZ Top beard. He is Alpha’s right hand man and probably lover man. 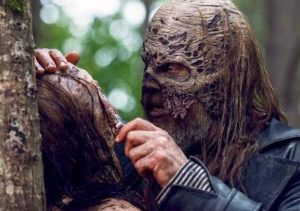 When a young couple try to challenge Alpha’s leadership Beta restrains the guy while Alpha confronts the woman. The woman backs down but it’s too late. Alpha garrotes her and slices her head clean off! She holds it up and presents it to the others as a warming. The look on Henry’s face is priceless. “What did I get myself into?” He gets another show when he gets to watch Beta carefully remove the face off of a walker. Yuck! 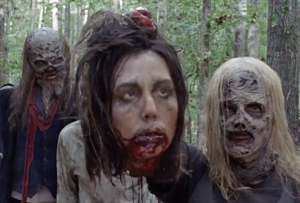 Alpha and Beta discuss what to do with Henry. They wonder what happened between him and Lydia while she was captured? How attached is she to him? Was there any hanky pinky? They decide to put her to the test and have her kill Henry. Henry protests but Lydia picks up the knife and then…. a herd of walkers invade the camp! They start feasting on the unmasked Whisperers which makes sense. Looks like Daryl and Connie, who had been tracking Henry, used the real walkers as a distraction so that they could sneak into the camp and free Henry. Daryl is even wearing a walker mask himself! When in Rome! But Henry refuses to leave Lydia behind! This idiot! Daryl says to leave her but it’s not happening. Henry drags her with them as they flee into the woods. 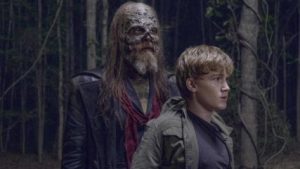 This is just plain stupid! Henry! You’ve just witnessed what these people are willing to do and the evil they are capable of. By taking Lydia you are committing all of your friends to go to war!!!! A pox on both your houses! 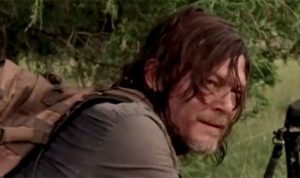 Daryl thought he had trained Dog to retrieve his arrows but just as he was about to hand it to him he broke it in half! Apparently not planned that way but it was so cute they kept it.

Love the intricate charts Eugene made to convince Father Gabriel to stay with Rosita. Check them out here.

I love the Whisperer’s theme music.

Wouldn’t it be funny if the film Jerry showed at the fair was the original Dawn Of The Dead? 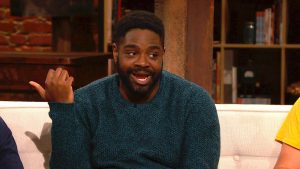 Ron Funchess needs to be a permanent guest on Talking Dead. When asked what he thought about Alpha decapitating one of her followers he said, “her neck was weak! She went through it like string cheese!” 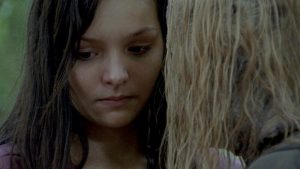 1 Beta will not be killed this season. He’s too good a character.

2 We will see more of Jesus in upcoming episodes.

3 I think we will see Maggie in a flashback!

4 Alpha and Beta will get Lydia back.