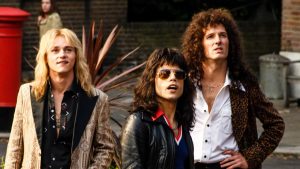 Biopics are tough. It’s almost impossible to please everyone, especially fans of the artist you’re making the movie about. If you do the birth to death approach the film can’t possibly get to the meat of the subject and just becomes a point to point of the artist’s biggest life moments. You can get experimental and just concentrate on a particular time period and this allows a lot more freedom. Bohemian Rhapsody is something in between but mostly the former and so you get highlights from Queen’s life as a band and also a look into Freddie Mercury’s struggle with sexual identity and handling fame and stardom. I have to admit I really enjoyed the film. It’s fun and fast and filled with the music of Queen which is fantastic. But it’s the performance of Rami Malek as Freddie Mercury which ignites the action and elevates the film above the average. 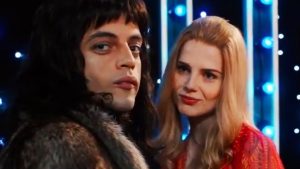 The film is mostly about Freddie Mercury, following him from his first days with the band and revealing his complicated relationship with his family and ethnicity as well as the insecurity with his sexual identity through to Queen’s triumphant Live Aid performance. Freddie gets involved with a young woman, Mary Austin (Lucy Boynton), who he met at a clothing shop. She embraces his eccentricities and accepts him as is and they have a loving relationship for awhile until Freddie starts embracing his homosexuality and starting a relationship with the bands day to day manager, Paul Prenter (Alan Leech). 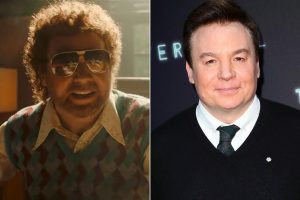 We get to see the band getting more and more popular, getting Elton John’s agent, John Reid (Aiden Gillen), US tours and fight with label bigwigs over their creative choices. Mike Myer’s is unrecognizeeable as fictional EMI executive Ron Foster, who refuses to release the six minute Bohemian Rhapsody as a single. 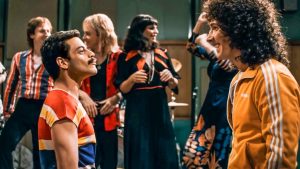 Mercury and Queen hit some rough times by the time the 80s come along. Mercury’s lifestyle becomes more outlandish and his partying becomes a distraction from the band’s music. He releases his own solo album and becomes estranged from his bandmates. It is also the time when the AIDS epidemic is in it’s early stages and all of these elements are strung together to bring Mercury to have an epiphany and want to make some changes. 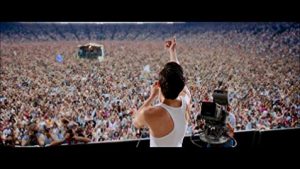 The film does get a little schmaltzy towards the end when everything has to happen all at once becomes too cliched but by this point you’re just enjoying the music and Malek’s bravura performance. Is it historically accurate? No. Is it groundbreaking filmmaking? No. But it is an entertaining ride and if you like Rami Malek and love Queen then you will love the film!