THE WALKING DEAD RECAP S9EP6 WHO ARE YOU NOW? 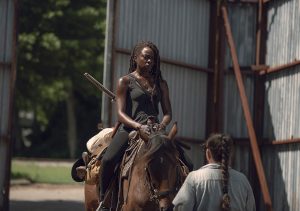 So much to say! This episode was more like the first episode of a new show. Rick is gone but it looks like Michonne is still seriously grieving. The show leaps ahead six years and from what I can tell they have been peaceful years. Alexandria looks like a whole new place with a windmill and new buildings.
Oh, and Michonne has a son! His name is RJ aka Rick Grimes Jr.! Wow! 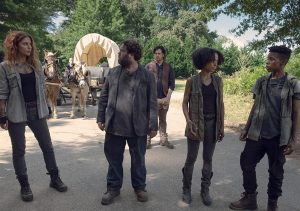 Judith is 10 now and she wears Rick/Carl’s hat, Rick’s gun and a mini katana. Everyone looks after her like a golden goose. She is, after all, Rick Grimes’ daughter. She’s gone out and saved a group of strangers and brought them back to Alexandria. This is something Carl would have and did do in the past. Michonne is not happy about this. She’s the leader now, though they have a Community Council, she’s still the final word on anything. The newbies are an interesting crew: Magna (Nadia Hilker), the leader, Luke (Dan Fogler), the new comic relief, Connie (Lauren Ridloff) and Kelly (Angel Theory) are a pair of sisters. They communicate with sign language as Connie is deaf. They are brought before the council and make their case for being allowed to stay and we get to know a little about each of them in the process. Michonne is against it at first but relents in the end. She doesn’t trust them but does she have reason not to? 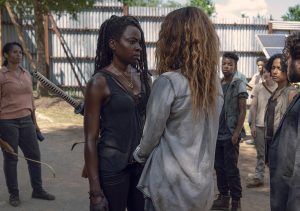 We see an older Grace who calls Aaron ‘daddy’. Judith likes to hang out with Negan in the afternoons while she does her math homework. He’s very sweet with her and she treats him like a kind bear join the zoo she likes to visit. She’s sassy but I don’t find her too precocious. 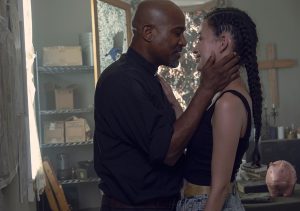 I wasn’t prepared to see father Gabriel making out with Rosita. What the hell? The padre has gotten more action than anyone else in the apocalypse! You can see Eugene is unhappy about this because he’s in love with Rosita. Who wouldn’t be? So we have a good old fashioned romantic triangle brewing though I never expected it to be between this trio. Father Gabriel sends Eugene and Rosita on a mission to set up a relay for the radio to try and strengthen the signal. This is when they get taken by surprise by a herd of walkers. There seem to be a lot more herds of walkers roaming the countryside than ever before! 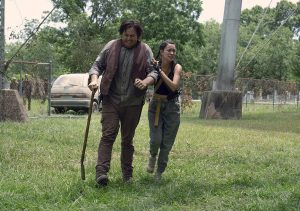 Eugene was prepared to sacrifice himself to save Rosita and almost professed his love but instead they both hide by the side of the road and cover themselves with mud while the herd passes. Things get really creepy when they overhear one of the walkers speak! “Don’t let them get away!” My guess is these aren’t walkers but actually the new big bad, The Whisperers which is taken from the comics. They disguise themselves as walkers and lord knows what awful things they are up to. 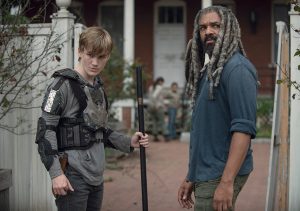 Meanwhile, life looks pretty serene at the Kingdom. Long, grey haired Carol is happily married to King Ezekiel and raising Henry as they own son. Henry is as ornery as ever! he dares back sass the King! 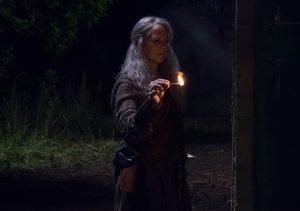 While on the road back home Carol and Henry get hijacked by a group of Saviors, the same ones that confronted Carol 6 years back at Tent City. They take their supplies and even take Carol’s wedding ring! Henry can’t believe that Carol would allow them to do this without a fight! But don’t worry, later that night, Carol sneaks up on these Saviors, gets her ring back and sets them all on fire! It’s good to see that she hasn’t tapered off! 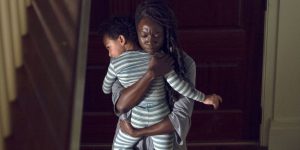 Michonne has a hot new hairdo too!

Daryl is now living in the woods all by himself. Rick’s death must have hit him hard. 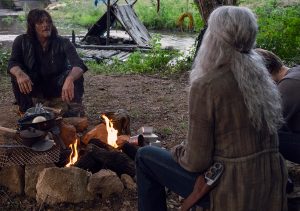 Machine talks to Rick when she’s alone. Rick used to talk to Lori on an old telephone after she was killed in Season Three. 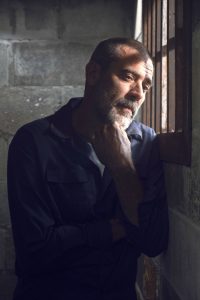 1 The new people probably know about the Whisperers, perhaps had run into them before.

3 Connie and Saddiq will become a cute couple!

4 Eugene and Rosita become a couple in the comics but its hard to see on the show unless Father Gabriel gets knocked off.

5 I have a feeling we will keep having helicopter sightings.

Previous THE WALKING DEAD RECAP S9EP5 WHAT COMES AFTER Next CAN YOU EVER FORGIVE ME?