THE WALKING DEAD RECAP S9EP5 WHAT COMES AFTER

Well, I called it! The helicopter came in and swooped up our hero like a deus ex machine and flew him to safety! We think. We don’t know who these people are or what they plan to do with Rick. What we do know, courtesy of Scott M. Gimple, is that Andrew Lincoln has agreed to do a trio of Rick Grimes films that will reveal what happened to him. Could these ‘others’ be working on a cure? Could Rick Grimes fly in at the end of the series (when that time comes) and bring the cure? Wouldn’t that be something? 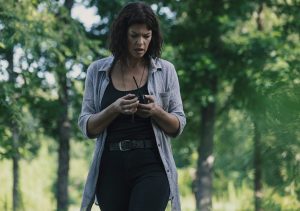 I was dreading how TWD was going to deal with losing Rick Grimes. It looked bad at the end of last week’s episode but Rick pulled himself off that rebar and mounted that white steed! He managed to stay alert just barely enough to keep from being bit and eaten, all the while, having a fever dream and being listed by the ghosts of seasons past. 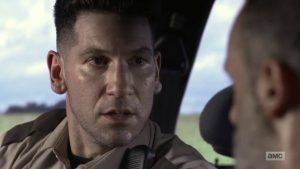 “I’m looking for my family” Rick

First up was Shane. So great to see Jon Bernthal back and seeing those two back in uniform and in their old cruiser having lunch. But they speak to each other with full knowledge of all that has happened through the present. Shane even goes there regarding Judith:

“Oh is that what you’re doing? Looking for your family, huh? See that’s not entirely the truth. One could argue it’s my family that you’re looking for, right? How is my baby girl, by the way? She’s got my eyes, doesn’t she?”

They have great chemistry in the scene and Shane takes credit for making Rick an asshole, the kind of asshole that was needed to survive. 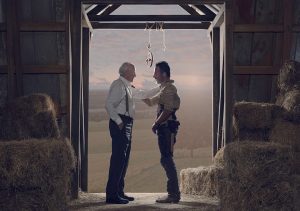 Next up he is visited by a clean shaven Hershel. They meet in the barn and Hershel calls him over to look at this beautiful sunset. They share a deeply felt hug. We’ve all missed Hershel. Rick apologizes for losing Beth and Glenn and for the pain he’s caused Maggie but Hershel tells him that Maggie is strong and he doesn’t need to worry about her. It was bittersweet to see the late Scott Wilson in his last performance. He was always such a calming presence and the epitome of humanity. Rest in peace, Scott Wilson.

“I’m tired, Hershel. My family… maybe I can find them here.” Rick
“No rick, you have to wake up.” Hershel 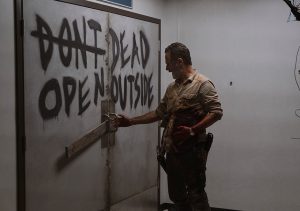 Then Rick finds himself in the hospital again, the one he was in at the very beginning when he woke up from that coma. He walks down the hall towards the double doors with the warning “Don’t Open – Dead Outside”. He opens the door and walks through and finds himself walking through a massive pile of bodies, bodies of all those he loved. Sasha pops up and offers comforting words.

Sasha tells him that he did his part and that everyone did their part. They gave each other strength and passed it on. She was like an angel in this scene, giving Rick some peace of mind.

“Little things do end. But it’s never the end of everything. Because we don’t die. It’s not about you, or me, or any one of us. It’s about all of us.” Sasha 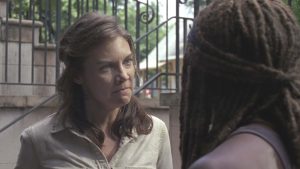 “I came to kill Negan. And you’re already worse than dead. That settles it.” Maggie

Maggie arrives at Alexandria to get her justice. Michonne meets her at the door of Negan’s cell. She tries to stop her but Maggie convinces her to let her pass. It’s a short but powerful scene. Negan isn’t surprised to see her and wonders why it took her so long. He does what Negan does best, taunts her by talking about how much pleasure he got from bashing Glenn’s head in. Maggie keeps yelling at him to get on his knees. Soon he is telling her to do it. 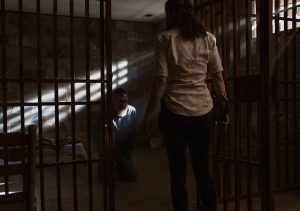 She drags him out of the cell and throws him against the wall. He is reduced to a blubbering pathetic fool. He wants her to put him out of his misery so he can be with his wife, Lucille. She realizes that he’s not worth killing. He’ll suffer more staying in that cell. When she comes out, her and Michonne are alerted to a problem at the bridge. Off they go for the grand finale. 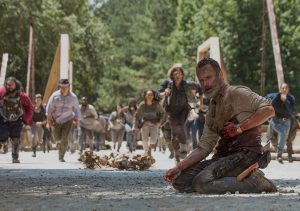 “I found them.” Rick Grimes

After his vision with Sasha, Rick falls off his horse and finds himself back at Tent City. There are a bunch of walkers there that were part of The Kingdom which indicates that some people were killed in the Carol – Saviors stand off that we saw the beginning of last week. He shoots a few but then the rest of the herd arrives. he makes his way to the bridge. The herd follows. He falls. It looks like the end. Then the cavalry arrives! Daryl and the others start killing those bad walkers while Michonne reaches Rick. 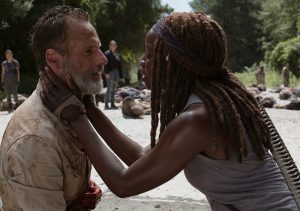 She tells him that he is a fighter and he needs to fight. Rick realizes that he’s found his family and it’s Michonne, Daryl, Maggie, Eugene, carol, it’s all the people that he’s with. He then realizes something else. “This isn’t real”.

“Yes it is”, Michonne tells him and kisses him. “Now wake up” 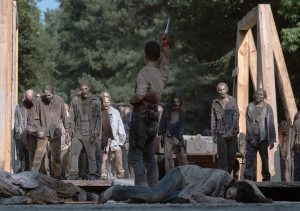 No cavalry arrived. He’s on that bridge with hundreds of walkers. The bridge is holding! Just as he’s about to get bit an arrow shoots through the air! It’s Daryl! And it’s Maggie and Michonne and Carol and everyone else! They rush to help Rick but Rick doesn’t want them too. There’s too many walkers and if they cross that bridge they’ll head straight for The Hilltop. 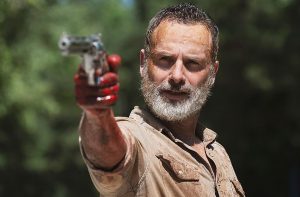 Daryl keeps shooting arrows, killing walkers and buying Rick some time. Then the walkers knock over a crate of dynamite. Rick knows what he has to do. He raises his gun and fires. The bridge blows up and Rick with it. He saved his family. 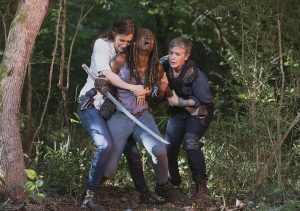 The pain on Michonne’s face is gut wrenching as Maggie and Carol hold her. Seeing Daryl cry is always sad. He just turns and walks away, stunned. 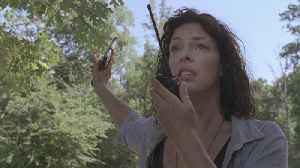 “I’m trying to save a friend who saved me.” Jadis

Jades had promised the helicopter that she had an ‘A’, meaning to turn over Father Gabriel but she couldn’t do it. She was planning on overtaking the helicopter by force but as she waited in the clearing she could see the smoke from the explosion on the bridge. She sees the river filled with dead walkers drifting by and then a miracle happened. She sees a barely alive Rick on the river bank. She gets on her walkie talkie and tells them she has a ‘B’! What ‘A’ and ‘B’ mean we don’t know but the helicopter people make the deal to pick her up and her ‘B’. Next thing you know Rick is up in the air, flying to who knows where. Jades is telling him he’s going to live! The helicopter flies out of sight. 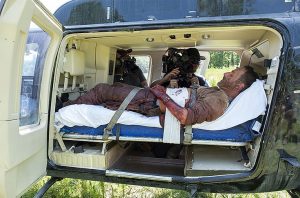 The scene change indicates some time has passed. We see some new people fending off attacking walkers. They’re surrounded until shots are fired and a path is cleared for them. They run into the woods and see a little girl. They ask her for her name. She picks up a big brown hair from the ground and puts it on. It’s Rick’s hat, The same hat that Carl wore for so many years. 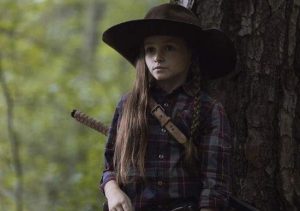 The show is making a six year time jump!

Great use of a belt by Rick to pull himself up and off that rebar!

I love the call back scene of Rick riding into Atlanta – this time followed by a herd of walkers.

This episode marks the final episode for Jadis and Maggie. We’ll see Jadis in the Rick Grimes movies. When we see Maggie again will depend on how well her new ABC show does. 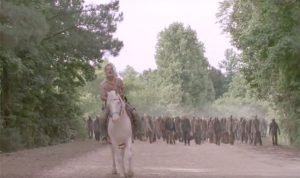 1 I don’t know what to expect! And that’s a good thing!

3 The Whisperers are coming! Disguised as walkers!

4 Negan will finally be released from his cell in the Mid Season finale!