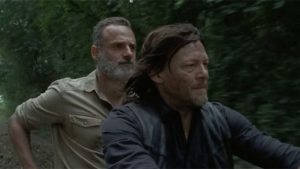 Oh, man, things are getting real! This was Rick Grimes’ penultimate episode and by the end it doesn’t look good for our hero. I held out hope that Rick would just go into self imposed exile so that he could return one day and save the world but it doesn’t look like that’s the way they’re going. I am not ready to lose Rick Grimes! Elsewhere, Michonne and Negan do a Silence Of the Lambs remake and Father Gabriel tries to convince Anne/Jadis not to kill him. Oh and Rick and Daryl fight.

“I think I’m not meant to be rotting in this cell just like the warrior in you is not meant to be planting kale and kissing boo boos.” Negan trying to bond with Michonne 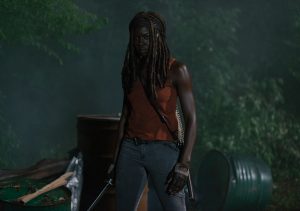 The cold open was a montage showing how restless Michonne is becoming. She gets up in the middle of the night to sharpen her katana skills on many random, unsuspecting walkers. By day, she’s busy trying to keep everyone happy at Alexandria and telling people what to do. Rick appears to only be interested in sleeping, playing with Judith and building that damn bridge! When it’s brought to her attention that Negan is refusing to eat she takes it upon herself to bring him his lunch and set him straight. But, of course, Negan turns the tables on her and pulls a Hannibal Lector and tries to get in her head. Machine lets him a la Clarice “fly, fly, fly” Starling. Quid Pro Quo, Michonne; I’ll eat my sandwich if you share with me your deepest, darkest feelings. She shares her anguish over losing her sons (including Carl) and he shares his anguish over losing his wife, prior to the zombie apocalypse, when people died the usual ways, of cancer. See, they’re both more alike than she realizes. But what Negan really wants to know is ‘where is Lucille?’. Machonne says she doesn’t know but you and I and Negan all know that is not true. Megan is in tears when she leaves him. he misses his bat! Of course he does! He named it after his loving wife! 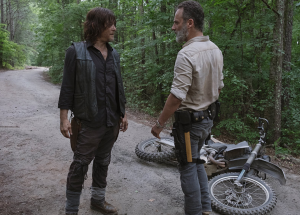 “I’d die for you and I would have died for Carl, you know that.” Daryl to Rick

Back at Tent City, things are falling apart. The saviors have gone home and now Carol is taking her people back to The Kingdom. Rick isn’t mad though. Carol’s his girl! He trusts that when the time comes she will do what is right. It may be the last scene Rick and carol have together and it’s a sweet one. 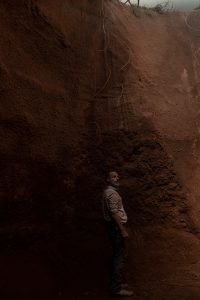 Meanwhile, Maggie is now headed to Alexandria to, we assume, kill Negan. Rick alerts the guards not to let her through the gates but the fix is in. It’s all been arranged and Rick was left out of the planning. Daryl offers to give him a ride on the back of his chopper but when Daryl misses the turn off Rick gets suspicious and asks him to pull over. That’s when things get physical! Rick and Daryl start rolling around in a scuffle and eventually roll right into a deep pit (of despair). Here they finally hash it out and have the heart to heart that’s been coming all season. Daryl tells him that his idea of a Utopian society isn’t working and isn;t ever going to work. He knows he’s doing it to honor Carl but he needs to let it go, to let Carl go. 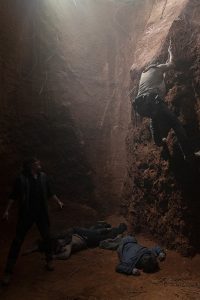 Then things get worse. Walkers start falling into the pit. They kill them at first but there’s too many. They need to climb out of there and it’s going to take teamwork like in the old days. It’s a great scene! The best part is once Rick gets out and reaches his hand down to the climbing Daryl, “brother, take my hand” he says and Daryl reaches out for Rick. Rick pulls his bestie out of the pit. The only other person Rick has called ‘brother’ was Shane. No sooner are they out then they start hearing gun shots coming from Tent City. Before Carol could clear out she gets confronted by the returning Saviors who found out that it was Oceanside that was killing their people. Now they want pay back! 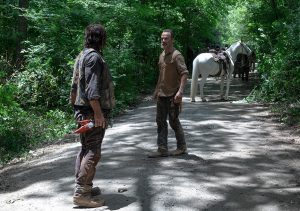 The final minutes are painful. Daryl wants Rick to go back to tent City with him but then they see a herd of walkers coming their way. Rick mounts his white horse and plans to lead them away from Tent City and tells Daryl to go back to Tent City. “Be safe” may be the last words Daryl ever says to his best friend. Rick rides off and the herd follows. All is going as planned until Rick’s horse gets spooked! A second herd of walkers is approaching from a different direction! Rick is thrown and gets impaled on a metal rod. The last shot is of a helpless Rick being descended upon by two herds of walkers!!!! 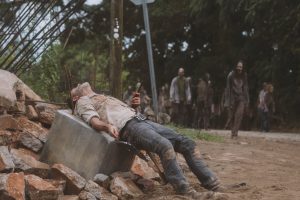 I do not want to see Rick eaten alive by a horde of walkers!!

Did I forget to talk about Father Gabriel? He’s still alive. 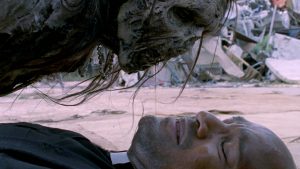 “Negan deserved to die when it ended. Rick was wrong because he made a call that wasn’t his to make. I just want to make sure that you’re not wrong in the same way that he was.” Jesus warning Maggie.

Rick’s last episode looks to be a fever dream episode. I know that Shane and Herschel are going to appear to him. We get to see the great Scott Wilson one more time! 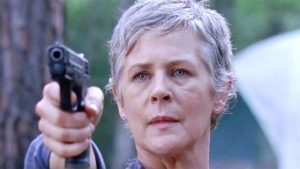 1 Rick will NOT die by walker

3 We get a Lori and Carl visit! Surprise!

5 Anne/Jadis saves Rick and then whisks him away in the helicopter! Rick doesn’t die!