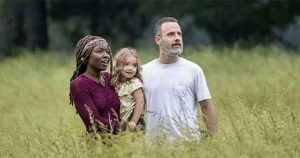 I start season 9 knowing Andrew Lincoln is leaving the show and dreading the fact that Rick Grimes will no longer be leading that old gang of mine. I’m hoping he doesn’t die and just goes away so that he might return one day. That being said, this season opener was excellent! It was action packed and gave all our favorites some really juicy scenes. The writing is sharp and lean and the episode really sets the table nicely for the future conflicts to come. 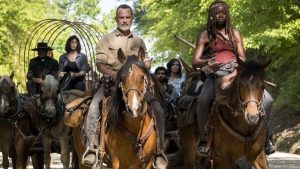 Everyone is on horseback! Except Daryl, of course, he’s on his motorcycle. Rick looks older with a gray beard and his little daughter, Judith, draws him with a “big belly”. He looks happy with Michonne and Judith but there’s still business to do.

The story jumps ahead about two years from the end of last season and the defeat of Negan. Life had settled down and all the different outposts are living in peace and flourishing except, that is, for The Sanctuary.  They haven’t been able to grow much except corn which, with Eugene’s help, they’ve been generating fuel. Daryl has been put in charge there and he hates it! 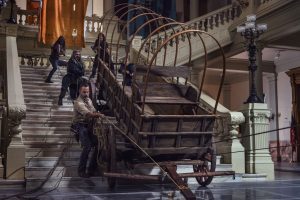 The opening sequence finds a group that consists of people from all the communities going on a mission into DC to the Capital Building to retrieve a treasure trove of seeds and farming equipment to help The Sanctuary get back on its feet. As the team is pulling s heavy antique wagon across a glass floor above a herd of walkers, the glass breaks and King Ezekiel falls through! Fortunately he was tethered to the others and they were able to pull him to safety with the help of Daryl and his trusty bow!  Once safe we see Carol rush to him, hug him and they begin to smooch! Romance has finally bloomed! As they ride away Ezekiel pops the question, ring and all! But Carol poo poos him, claiming that the ring will catch onto things and also that this wasn’t going to happen on horseback! 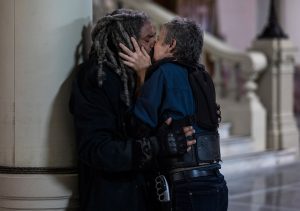 “I love you and I always will” he tells her. She just gives him one of those Carol looks. She loves him too!

Of course, they run into problems when a herd of walkers comes along and the wagon gets stuck in the mud. One if the guys from Hilltop tried to save a horse from getting eaten and ends up getting bit himself! The guy had a name and it was Ken but he might as well have been resting a red shirt!!! Maggie took it hard and had to be the one to break it to his parents played by Brett Butler and James Finn. The mother confronts Maggie over her leadership and giving so much of their food and resources to The Saviors and not looking out for The Hilltop. 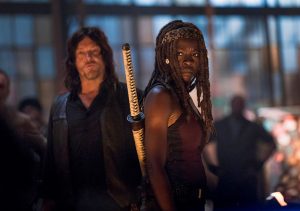 Meanwhile, Rick, Michonne, Carol, Daryl, Ezekiel and Jerry head for Sanctuary. Rich is greeted like a legend. “Rick Grimes is here!” One man tells his children “This is the man who ended the war”. Rick promises them that they will be looked after and they’ve brought all the tools they need to get their crops growing. He’s greeted with thunderous applause! “Bless you Rick Grimes!”

But Daryl is not happy. He doesn’t want to give speeches to these people and seeing Rick do it reminds him of Negan. In fact, just being there reminds him of a time he’d like to forget and he tells Rick he doesn’t want up be in charge anymore. Rick tried to push the solidarity line and preach how they all need to come together to help each other. Daryl doesn’t think they should waste their time with The Sanctuary. “It’s going to fail anyway. Nothing grows here!” He likes the way it was in the beginning when it was just their small group. He doesn’t like this new world they Rick is trying to create.

Carol has a heart to heart with Daryl. She asks what she thinks of her being with Ezekiel. “He’s alright. He’s s bit corny” he tells her. “At least I have Pookie’s approval”
Carol offers to take over at Sanctuary so Daryl can go to Hilltop and be with Maggie and her baby.

When Rick and Michonne slip into bed they share their fears. Michonne was bothered by the graffiti they saw that said “We are still Negan”. They both wonder if they did the right thing keeping him alive. Michonne also teases him; “ The famous Rick Grimes!”
“Oh no, don’t you start too!” Rick moans. 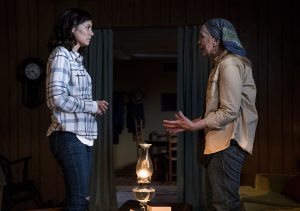 Meanwhile, back at Hilltop, they hold the funeral for Ken while the uninvited Maggie watches from her balcony. Gregory gives a lovely speech but then starts working on the grieving parents, turning them against Maggie. Gregory is such a sleazy character. He has stabbed so many people in the back he’s run out of knives and has to convince someone else to go the stabbing, in this case, it’s Ken’s dad. When Maggie is taking baby Herschel for a stroll in his stroller, Gregory mentions that Glenn’s grave was defiled so naturally she goes to have a look and is cold-cocked by a guy in a cloak. She manages to fend him off in time for help to come. Enid comes along and gets knocked out for her trouble. But eventually the guy is subdued and revealed to be Kens dD. Maggie confronts Gregory who at first, pretends not to know about the attack but then pulls s knife to finish the job. Of. Purse, Maggie disarms him. 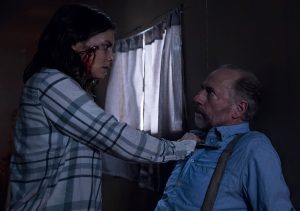 The next day, Rick, Michonne and Daryl arrive and find out what happened. This is a turning point for Maggie and Rick. They have a scene on the porch where Rick asks for Maggie and Hilltop to give even more than they already have by dedicating manpower to repair an important damaged bridge. Maggie has reached her giving limit, however. She puts s price on their help and Rick is stunned but Maggie holds fast. She was promised to become the leader but Rick never relinquished his leadership. 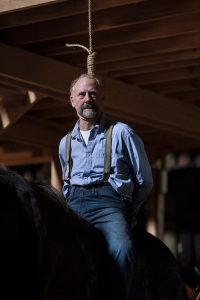 That night, Maggie asserts her power even further by holding the public execution by hanging of Gregory as Rick and Michonne look on in horror. It’s a powerful statement and a powerful scene to close out the episode. The power struggle begins 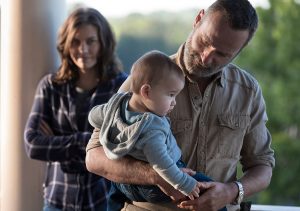 I liked Father Gabriel killing a walker in the museum in front of the Evolution of Man exhibit. It gets stuck at the end creating the next stage. The De-Evolution of Man.

Michonne comes up with the idea of creating a charter laying down the new rules of society from a poster she sees in the museum.

Eugene finally got rid of his mullet!! 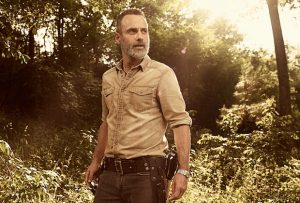 1 Now that Carol and King Ezekiel are an item – He Must Die! The Carol will take over The Kingdom.

2 Unless Rosita, Tara or Enid are given more to do they’re walker fodder.

3 Lauren Cohan is leaving the show so that means Jesus will take command of The Hilltop which will cause friction with Daryl.

4 If Rick Grimes dies Michonne will take command of Alexandria.

5 Rick’s death will unite the 5 communities just in time to fight the new big bad – The Whisperers.

Previous JULIET, NAKED Next A STAR IS BORN