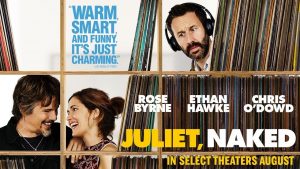 If anyone was wondering what happened to troy from Reality Bites (1994) this film is as close to an answer as you’ll get. Ethan Hawke plays a singer/songwriter who put out one album in the 90s and then disappeared and developed a cult following. This is perfect fodder for the likes of write Nick Hornsby whose 2009 novel of the same name is the basis for this film. The film is directed by Jesse Peretz (Girls, Nurse Jackie) and produced by Judd Apatow and an interesting quartet of writers, including Jim Taylor (Election, Sideways) and Phil Alden Robinson (Field of Dreams, Sneakers) which would indicate a superior romantic comedy but doesn’t quite reach those expectations. 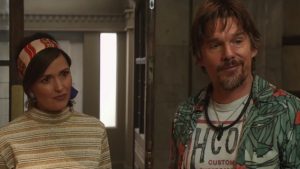 The plot is simple. Annie (rose Byrne) is married to Duncan (Chris O’Dowd) who is obsessed with a one hit wonder obscure singer/songwriter from the 90s named Tucker Crowe (Ethan Hawke). They live a very mundane existence in a seaside village in England and Annie feels trapped and lonely. Duncan runs a website dedicated to Tucker Crowe and when Annie posts a negative comment on the website she is surprised when Crowe himself responds. They begin a correspondence and soon enough they plan to meet in London. As you can imagine, hijinks ensue. 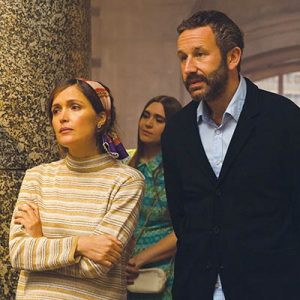 This is a light romantic venture and though it doesn’t really come together I found it charming. Hawke and Byrne don’t really generate the chemistry needed to really commit to what transpires but the real pleasure here is Hawke. As he gets older he is becoming more and more comfortable in his skin and becoming a really fine character actor, playing against his boyish good lucks and letting himself look paunchy and weathered. He gives a fine performance of a man who could have been a star and is now just trying to be a good person. You find yourself rooting for him.

Byrne is good. She’s funny but she’s been better in other films. O’down is also very solid as the nerd and horrible husband who’s life is dedicated to a has been who never was. He could have been a one dimensional loser but O’Dowd gives him depth and you find yourself caring about him even as you’re completely annoyed with him. 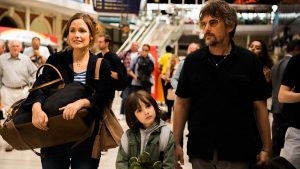 Jesse Peretz rightly doesn’t try to do too much with this light material, choosing to highlight the understated performances and delivers a sweet film reminiscent of Local Hero (1993). This is pure Nick Hornsby territory but it’s Hornsby lite and that’s still pretty good. 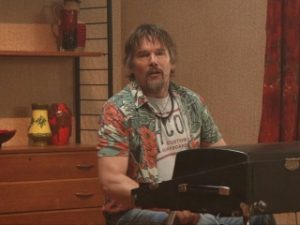 I enjoyed it. It’s not great but I love where Ethan Hawke is taking his career and he’s worth the price of admission.