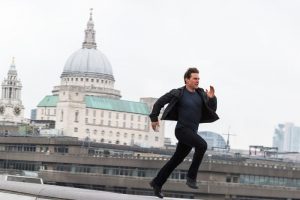 I grew up watching the original Mission Impossible on television. I used to love it! The great theme song by Lalo Schifrin, Peter Graves’ stoic Jim Phelps, the masks, the twists, the women! I had such a crush on Lynda Day George and Lesley Ann Warren. When they did a big screen version in 1995 with Tom Cruise I was thrilled. It didn’t disappoint. It was fun and filled with the twists and turns you want and expect in a Mission Impossible story. The first film was directed by Brian DePalma, the next film was helmed by John Woo and the following films by JJ Abrams, Brad Bird and the last two (including this one) by Christopher McQuarrie. While I have enjoyed all the films in the series I do have a preference for MI4: Ghost Protocall. That being said, MI6: Fallout is another great entry and it delivers the goods. 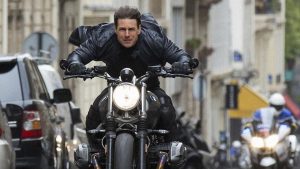 Fallout is a direct sequel to M!5: Rogue Nation. Ethan Hunt is directed to engage with a group called The Apostles and get the three plutonium cores that they possess. The mission goes awry when Hunt has to choose between getting those plutonium cores or saving his team, Benji (Simon Pegg) and Luther (Ving Rhames). The consequences are devastating. Hunt’s boss, Alan Hunley (Alec Baldwin) gives Hunt another chance to redeem himself and get the plutonium cores but the new CIA director (Angela Bassett) doesn’t trust Hunt and the IMF team to get the job done. She agrees to let their mission proceed as long as they take one of her men, Walker (Henry Cavill) along to keep tabs on them. 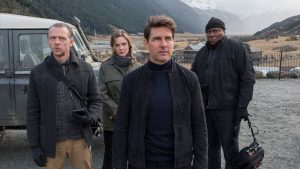 There’s no point in trying to explain the plot further, there are so many twists and turns and double crosses that it was hard for me to keep track. You will see many familiar faces from the previous films including Michelle Monaghan as Hunt’s ex-wife and an integral part of the story. The action sequences are amazing especially the final 30 minutes. Cruise displays his love of doing his own stunts and doesn’t disappoint. 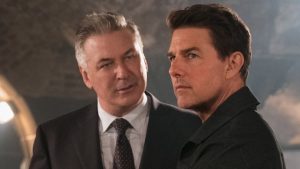 Alec Baldwin is great! Rhames and Pegg as solid as usual. Rebecca Ferguson returns as Hunt’s new love interest/nemesis Ilsa Faust. Henry Cavill is sufficiently unlikeable and that works for this part. Vanessa Kirby has a small part as black market arms broker. I wish Angela Bassett had more to do but hopefully in the next installment?

Fallout is not the best entry in the series but it’s still one helluva ride! 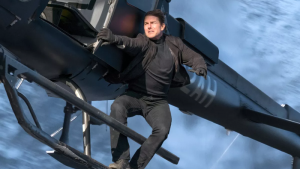