WTF??!! Westward capped off a challenging and confusing season with the most challenging and confusing season finale of any series since the original Twin Peaks. I had two friends over to watch with me and as the episode ended one was silent with a bemused look on her face and the other was shouting and gesturing at the TV decreeing that he loves this show! And that was before the Marvel-like extra scene after the credits! My reaction fell somewhere in between.

As suspected, all our characters were headed to the same place; The Valley Beyond which we now know is called The Forge. There are many casualties along the way, in fact, almost every character we know and love or love to hate. It was great to see William and Delores riding together one more time although their alliance didn’t last long. We got to see Acheketa leading his people which included a mix of Ghost Nation and other hosts including Maeve’s daughter and her current mom. The newly programmed Clem leading a caravan of park security and Charlotte Hale 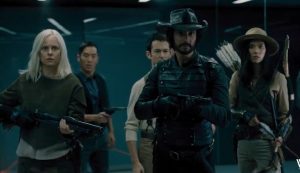 “You’re both a bit late so I went ahead and saved myself.” Maeve

Hector and the gang came to rescue Maeve but she had already rescued herself and commanded a herd of longhorn steers to finish off the remaining security force. They head to the Valley Beyond along with Sizemore. In one of the best scenes in the episode Hector is about to sacrifice himself to allow Maeve to continue on but is stopped by Sizemore who then engages the security team by saying Hector’s famous speech which he of course wrote. He goes down in a blaze of glory. Redemption at last. 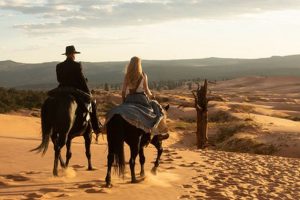 “We were designed to survive. That’s why you built us. You hoped to pour your minds into our form but your species craves death, you need it. It’s the only way you can renew, the only real way you can ever inch forward. Your kind likes to pretend there’s some kind of poetry in that but really it’s pathetic. But that’s what you want, isn’t it? To destroy yourself.” Delores

William and Delores save Bernard from getting taken by security at the open door to The Forge. William thinks he can now kill Delores but no matter how many times he shoots her she just won’t die. William’s gun misfires courtesy of Delores and he blows off a couple of fingers. She doesn’t finish him off though. She leaves him while she and Bernard descend into The Forge. 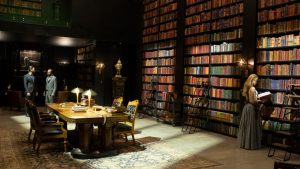 Abernathy’s brain ball was the key that allows access to the virtual reality world of The Forge. Delores and Bernard enter and find themselves in Sweetwater where the system was attempting to replicate James Delos. The System, it turns out, is actually Logan Delos! Or at least a facsimile of him. They wander through James Delos’s memories with Logan as their guide. He shows them the memory that was the defining moment in James Delos’ life. Logan comes asking for help and his father turns him away. Six months later Logan committed suicide.

So the replications of Delos never worked because they were too perfect a copy. The System has made a copy of every guest that entered the park. Their codes were put in book form. Delores seems to choose certain ones and reads them. The System tells Bernard that a host isn’t likely to survive in the outside world but armed with the knowledge in those books Delores might. 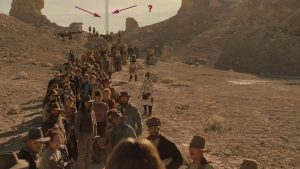 So there is a Door. A door that leads to a virtual Eden. The hosts have a choice to enter it, allowing their physical bodies to die or stay in the world and find another way. The System opens the door which only hosts can see and many make their way through. As they enter, the bodies fall in the valley. This explains why all those hosts bodies were found in the water and their minds were empty. Their minds live on at The Forge in that virtual Eden.

“Because that which is real is irreplaceable. I don’t want to play cowboys and indians anymore, Bernard. I want their world. The world they denied us” Delores

Delores, of course, does not want another ‘false’ world. She wants to be in the real world. She floods the valley and erases all the guest archival data. Bernard doesn’t agree with Delores’ decision. He believes her to be dangerous now. He shoots her. 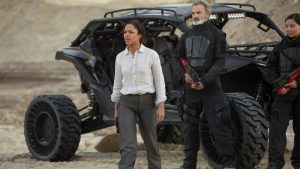 Clem rides through the hosts like the Angel of Death, triggering them to attack and kill each other. Hector, Armistace and her shogun world double try to buy Maeve time to reach her daughter and end up dying. Maeve reaches her daughter in time to say goodbye. “You carry my heart with you” she tells her and then is able to stop all motor functions of all the hosts long enough for her daughter and new mother to go through the door with Akecheta’s assistance. Then she is shot and killed. Akecheta just barely makes it through before the door closes and is reunited with Kohana. 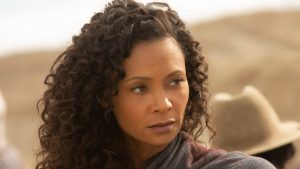 Bernard exits The Forge and Elsie drives him back to The Mesa. Elsie was going to make a deal with hale concerning Bernard but before she can reveal that Bernard is a host Hale shoots her as Bernard watched. This triggers him to try to recall Ford in his data stream but he erased him. But he manages to summon him anyway, at least, his memory of him. He decides to take action. 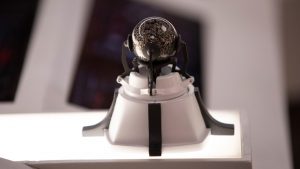 Hale wants ‘the pearl’, Abernathy’s brain ball, the key to accessing The Forge. She believes Bernard hid it in Delores’ corpse. Strand starts to download the info but instead of the guests data being sent it was the host data. But then Bernard remembers what he decided to do. He created a host. A host that looked like Charlotte Hale and placed Delores in it. Delores killed Hale. The Hale we have been seeing in the present was Delores all along. Delores kills Strand and all the other security detail. She sends the virtual Eden somewhere that no one can find so that they’ll be safe. So everyone that went through won’t be back next season!

Hale escapes with the help of Stubbs who seems to be aware that she is a host and his dialogue would seem to indicate that he is also a host. Delores also has a bag full of brain balls. Who are they?
Stubbs stays behind for clean up as do Felix and Sylvestor. They are to salvage whatever hosts they feel can be salvaged so I will assume that Maeve and Hector will be revived, maybe Armistice and shogun Armistice. We also see that William had been rescued and is on the beach at the end being tended to which was confusing because last we saw of him he had gotten into the elevator and was descending into The Forge but we never saw him after that.

Ford had Arnold’s old house set up to create hosts and be a haven for those who made it. Delores created herself and a new Bernard. But who is now in Hale’s body? Arnold is still worried that Delores will want to destroy the humans and will try to stop her. She understands this but she needs him just as one needs a conscience. It sets up quite an interesting conflict for next season. 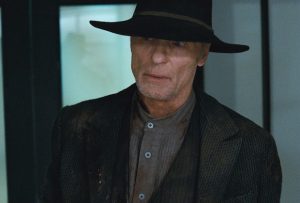 The after credits bonus scene is a doozy! As if we weren’t already blown away enough, they threw in one last big twist! The Forge looks abandoned and he is greeted by his daughter.

“I’m already in the thing, aren’t I?” William
“No, the system is long gone” Emily

She leads him into a room that looks just like the apartment that was set up for the replicant James Delos. She starts asking him questions and it seems that they’ve been testing him for a long time. They are still trying to verify ‘fidelity’.

My guess is this could be 30 years in the future. Could the show make that big a time jump next season? That would be amazing!! 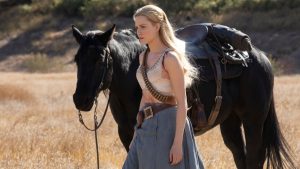 1 The real Emily is safe and sound. Looks like he really killed his daughter.
2 William and Delores have one final showdown but neither die. CORRECT!!
3 Maeve escapes with Sizemore’s help, and teams up with Bernard to flood the valley. Well she escaped but didn’t need any help and she did not help flood the valley. WRONG!!
4 Sizemore dies. YUP!
5 Hale dies. She must! YUP!! 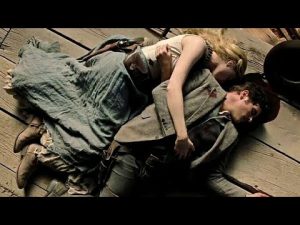 Who knows what they’re dreaming up for next season or when it will air. It could be 2020! But many characters will not be returning. Let’s say farewell to those we lost this season.

It was a crazy season! I’ve watched the finale twice and I know it’s long but it helps. There will be plenty of time before season three so there may be time to rewatch season 2 more than once before then. Great work Jonathan Nolan and Lisa Joy! Great performances by the entire cast! Thank you!