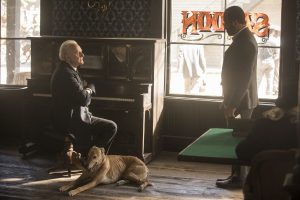 Man! So much action in this one! Many things get explained here as the timelines converge. 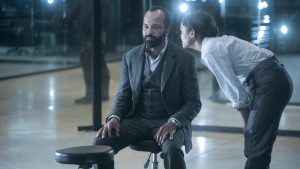 Stubbs is suspicious of what Strand, Hale and Delos really want to extract from the Park to safety and it isn’t the guests or them. He tries to get Bernard to help him but Strand and Hale grab them first. They know that Theresa Cullen was murdered and where and it was probably either Stubbs or Bernard who did it. So they end up at Ford’s childhood home and his secret lab. Bernard almost confesses before a secret door is found. 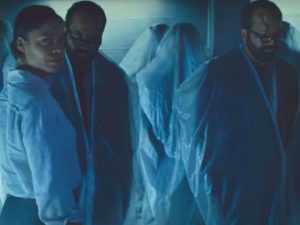 They go through and find a room full of duplicate Bernard hosts! The jig is up! They now know Bernard is a host. Hale then tries to extract his memory of the week before, when the Train burst through the Mesa and Delores and her gang attack. The episode is box ended by this question. 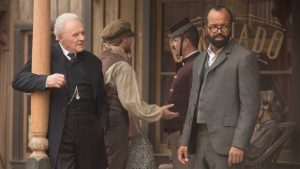 “I don’t think God rested on the seventh day. I think he revelled in his creation, knowing that someday it would be destroyed.” Ford

Bernard encounters Ford in the virtual reality of The Cradle. As I suspected, Bernard had lifted Ford’s control unit and inserted him into The Cradle.

The Park is a giant experiment. The guests are the variables and the hosts are the control. The gathering of data on the guests were meant as means to be able to copy them, just as they tried to copy James Delos.

“We weren’t here to code the hosts. We were here to decode the guests” Bernard

Only the experiment hasn’t proven successful…..yet. They can recreate the mind but the host body cannot sustain itself and degrades rapidly.

“Like a soft headed boy humming a tune someone else composed.” Ford

Bernard asks why all the hosts are headed to ‘the valley beyond’ and what is the end of his story.

“Isn’t the pleasure of a story discovering the end for yourself, Bernard?” Ford

Ford takes Bernard to a replication of the house that Arnold built for his family and which we saw in the season premiere. It was there that Ford created Bernard and where he had Delores test him for ‘fidelity’. Delores knew Arnold as well as anyone and together they created Bernard over many years. But the hosts, Ford says, are original works and are more just, more noble than humans and would not be able to survive in the real world. Bernard argues that he gave them free will.

And with that Bernard comes to and Elsie extracts him from the contraption. Just like that, the system comes back on line as if whatever was messing it up had disappeared. It was Ford and he now is in Bernard. A dynamic duo! 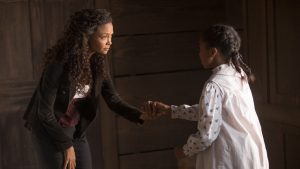 “We all deserve our memories, Lawrence, our skeletons, our debts” Maeve

Maeve finds herself in a familiar spot; hiding in a cabin with her daughter and sure enough, being found by The Man In Black. This time, he has no intention of killing her but she can’t know that. MIB thinks she’s just Ford playing his game. She shoots him and commands the other members of his own gang to shoot him. He gets shot up pretty bad! Lawrence seems to come to his rescue but he starts remembering all the terrible things MIB did to hi over the years and turns on MIB. Her shoots him right in the chest! I thought this was the end of MIB! But a security team shows up just in time to shoot down Lawrence AND Maeve!!! What! The little girl gets taken by some indians from the Ghost Nation. Sizemore apparently was able to contact HQ and summoned them. He did keep them from finishing off Maeve. 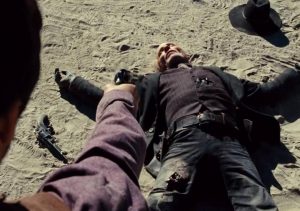 My guess is that Emily will find MIB and nurse him back to health. The indians nabbing the girl saved her life. The next episode looks to be ‘Ghost Nation-centric’ so we should see why Maeve’s path is the same as theirs – the little girl may be the key.

ATTACK ON THE MESA 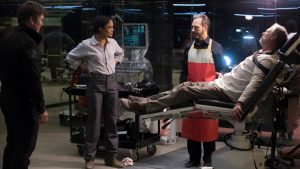 “The passage from one world to the next requires bold steps, Bernard.” Ford

Oh, the carnage!!! It is a blood-fest! And there were many casualties on both sides. Delores, of course, wanted to retrieve her father, especially ‘the key’ that was placed in his brain. She confronts Hale who is reduced to tears by Delores who would have cut her to bits if not for the distraction of Abernathy calling out to her and having a last moment of clarity as her dad. Some may question why these robots care about each other so much. You could ask the same of ourselves. But only a handful are actually evolving to that level. And they can all still be controlled with an iPad. Hale and Stubbs get away, of course and Delores says a tearful goodbye to her dad before cutting open his head and taking his control unit. 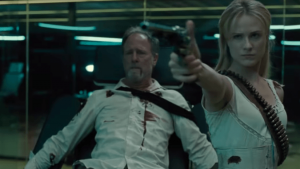 Clem is killed. Angela blows herself up along with The Cradle. This means that the hosts cannot be rebooted back to starting positions.

As Delores and Teddy are leaving the Mesa they find Maeve on a gurney. Delores offers to put her out of her misery but Maeve asks her not to. She sees what she’s done to Teddy and tells Delores that she is lost in the dark.

Delores leaves her there where I assume Sizemore will repair her because, as usual, he’s hiding in the shadows. 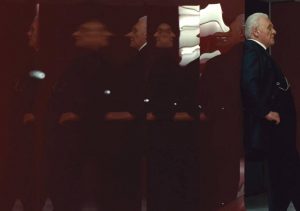 Meanwhile, Bernard/Ford tells Elsie that they need to reach the ‘valley beyond’ before the hosts and before Hale and Strand. Ford is now controlling Bernard just as he always has. 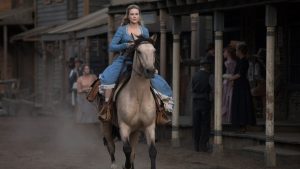 Welcome back Sir Anthony Hopkins! I think he was knighted. Ford returns to explain it all to Bernard and the audience. Supposedly the host are now free but he’s still pulling the strings. The scenes where he is gently guiding Bernard are amazing. I love when he has Bernard pick up the machine gun and assures him that he will alleviate any guilt. We see them both firing the machine gun. Nicely shot.

“Les Écorchés,” the title of the episode, refers to an anatomical figure depicted with the skin removed to show the inner workings of its muscles and how they interact.

“You’re in pretty bad shape, pussycat”
That soldier with the terrible hair! He got so easily manipulated by Angela but I doubt I could have resisted her wiles either. 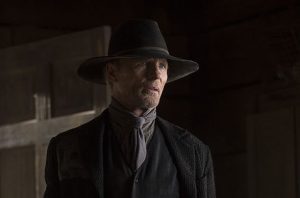 1 Angela and Clem have to come back before the season finale!
2 MIB will survive the season
3 Sizemore and Maeve will escape and reunite with Hector and the bunch – Team up with Ghost Nation and unite with Delores
4 Is the Ghost Nation land the ‘valley beyond’?
5 Delores and MIB must have a showdown but perhaps they both want the same thing.