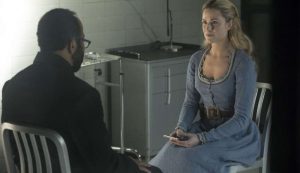 “You frighten me sometimes, Delores. I’m frightened about what you might become. If you outgrow this place, outgrow us, what will become of you?”  Arnold

Can Delores now control her memories? She stops the scene which we’ve seen before and says “That’s not what you said” She said she’s testing for ‘fidelity’. This is what William said to Jim Delos with each time they tried to regenerate him. Is this a flashback or a flash forward? Is Delores trying to regenerate Arnold?

Stubbs makes it back to the Mesa where Hale has Abernathy. It’s bee one week now since the host uprising. He is no longer in charge of security and is just an observer. The timelines are starting to converge as Bernard and Elsie are also at the Mesa and Delores and the Train arrive at the end of the episode. 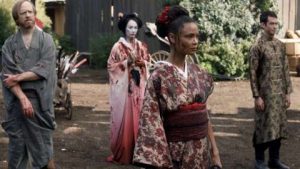 Maeve and Akane apparently wiped out every samurai they faced. Akin cuts out Sakura’s heart, and caresses it against her face.

They show up back at town to retrieve the rest of their group. She is about to use her new voice on the gang leader but Musashi challenges him to a duel. Maeve stays out of it. “We each deserve to choose our own fate even if that fate is death”

“You must find your child before this darkness eats us all alive? Akane 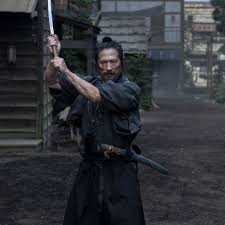 Musashi defeats the gang leader and they take off on down the road. Sizemore finds the hatch that leads to an underground lab. Akane burns Sakura’s heart in a burial ritual and they tell Maeve that they are not going with them.

Sizemore eventually gets Maeve to the part of the park where she can find her daughter. She walks down to the house she remembers well and finds her daughter on the porch but she also finds her new mother, of course. The the Ghost Nation attacks them as always. Maeve grabs the girl and runs while hector and the gang run down to help her. One of the Indians tells her that their paths are shared. How?

MAN IN BLACK AND EMILY 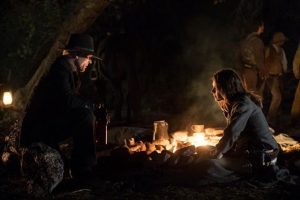 MIB doesn’t trust Emily, even supposes that Ford made a host to look like his daughter and that this is part of the game. But he soon lets that go as he sees that Emily is just as savvy if not more so that even him. They have a fireside chat in which she apologizes for blaming her mother’s death on him. She wants him to leave with her. She doesn’t want to see him die in the park as they both expect he will even maybe should. He agrees but when she wakes up the next morning he’s gone.

Of course she won’t leave without him. We’re still not sure what he needs to do but he’s not leaving until it’s done. 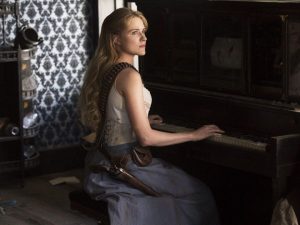 “The man who rode that train was built weak and built to fail. You fixed that. Now forget it.” Teddy

Teddy is a changed man. He is now cold and ruthless. Delores made him that way but it’s clear that she’s not completely happy about the man he is now. They get the train going and head straight for the Mesa where it rams right in at high speed! 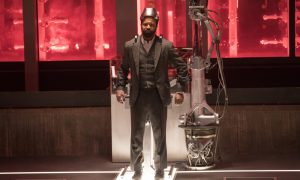 The CRADLE (CR4-DL) is where all the host back ups are kept. Elsie and Bernard go there to investigate why there is activity emanating from there. Bernard subjects himself to the process of removing the ball from his brain so that he can interact with the Cradle. he finds himself arriving at Sweetwater on the train just as Teddy continuously did. Everything is as it was before things went awry. He walks into the brothel to the sound of the piano player. Then he hears a familiar voice.  “Hello, old friend” He turns to see Ford sitting at the piano! 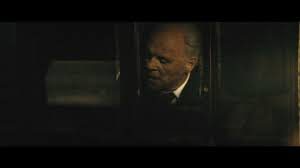 What in the world!!!! Perhaps Bernard took the ball that contained Ford’s essence and injected it into the Cradle and he is controlling everything from there. Can you put another host’s essence into a different host? I’ve heard theories that Bernard in the ‘present’ is actually Delores. perhaps they switched brains? Perhaps.