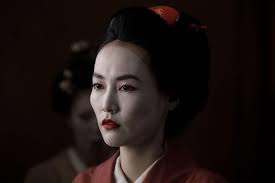 Shogun World is here! So many new revelations, big and small. No Man In Black in this one and that’s ok. This is Maeve’s episode with a couple of significant Delores/Wyatt scenes.

Strand and Hale are doing clean up. Clearing the human bodies from the Mesa control center and dragging the seas for host bodies. They are removing their brains to try and see what happened but a third of them are completely empty, ‘virgin’. They trying to recalibrate them to be under their control again. We see Teddy’s dead body lying on the heap. But who killed him? Per my last blog entry I’m thinking Delores but…….. 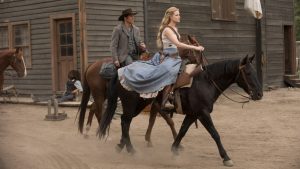 Delores and Teddy return to Sweetwater. She wants to get the train working again so they can go after daddy. They go into the bordello and zombie Clem meets the new Clem and even seems to be mouthing her old lines along with new Clem. There’s some hint of ‘life’ in there yet.

“You can’t tell me that somewhere out there in all that beauty there isn’t a spot for us” Teddy tells Delores. “You’re a kind man”, she tells him and then they make love, I believe for the very first time. All seems good until Delores leads him to a place where she has Teddy held against his will as she instructs her human tech turn up the ‘mean’ settings on him. You see where they’re headed she doesn’t need a kind man. She needs one that will be ruthless and do as he’s told. Poor Teddy. 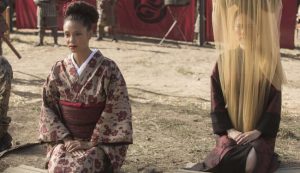 “That’s not supposed to happen” Sizemore

Maeve and her troupe are confronted by some samurai. Maeve tries to control them like she controls all other hosts (except Delores) but it doesn’t work. She used English and they didn’t understand her. But Siemore tells them that they have the ability to understand and speak several languages, they just need to access it which Maeve does.

As they are brought into town it all seems so familiar. Then you get it. This is Shogun World’s version of Sweetwater. Musachi is Shogun Hector, there is a Shogun Armistace complete with snake tattoo. Akane is Shogun Maeve and Sakura is Shogun Clem. They proceed to act out the safe robbery scenario we saw a few times in Season 1. Maeve actually gets upset with Sizemore, complaining that he took THEIR storylines and used them with other hosts. It’s hard to come up with fresh new stories!

There is a terrific action sequence with attacking ninjas versus both sets of Hectors. Armistaces and Maeves. Maeve keeps trying to use her voice commands but keeps getting her moth covered or being choked! This is when she finds a new trick. Telepathy Command. She uses telepathy to issue commands to the ninjas culminating in getting one ninja to impale his eye onto a knife. The attack did result in the kidnapping of Sakura however who the Shogun had asked for and been refused. 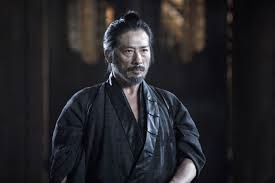 When the Shogun’s army comes back Maeve asks Musashi to buy her some time so that Her, Akane, Sizemore, Sylvester and Felix can get away and go to meet with the Shogun. Maeve has a plan. On the way to see the Shogun, Sizemore runs across a dead Delos security guard and grans his walkie talkie. Let’s see how this comes into play in the future. 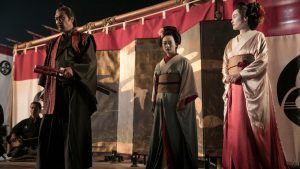 Once they meet with the Shogun Maeve’s voice commands do no work on him. We can see “brain juice” leaking from his ear so he’s in full malfunction mode. Akane and Sakura are prepared to dance but all of a sudden, the Shogun kills Sakura! Akane starts her dance and just as you notice what was that hair piece holding up her bun she pulled a knife from it and proceeded to cut off the Shogun’s head!!! Yowza! That even shocked Maeve!

Maeve then was able to use her telepathy to get the Shogun’s army to turn on each other. But once they had all killed each other another army of warriors was rushing the compound! Maeve raise her samurai sword above her head and prepared herself as the episode ended.  Awesome finish! 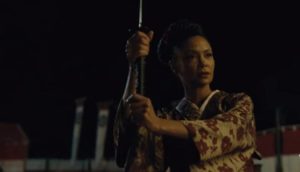 I have been travelling for the last 10 days so I fell behind an episode so no predictions on this recap. I’ll be looking at Episode 6 today! I’m curious to see what Teddy has become after Delores has changed his settings!