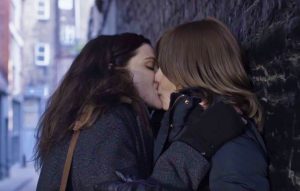 Disobedience is based on a novel of the same name by by Naomi Alderman and directed by Sebastian Leilo. It is a tale a taboo and religion and family divisions. All perfect ingredients for a tale of conflict and tension. It doesn’t quite hit the bullseye but it gets close enough that I can say it’s definitely worth your time. I know the big draw for some is the talked about sex scene between the two female leads but the film has more to offer than just that. Although, my friend, Cheriece, who saw the film with me, thought the sex scene was a bit too porno for her taste, I thought it was tastefully and creatively shot. But you can decide for yourself. 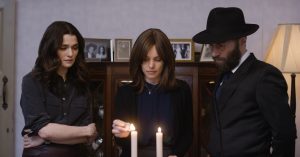 An old rabbi falls dead in a synagogue and word is sent to his only daughter Ronit (Rachel Weisz) a photographer in New York. She comes to London for the funeral and everyone is surprised to see her. She had been ostracized by her father and she had not been back since she was a young girl. Her father took in David (Alessandro Nivola) when he was young and raised him as his son and protege. Ronit is shocked to find that David has married Esti (Rachel McAdams) her childhood friend and we soon discover, lover and her relationship with her is the reason why her father disowned her. 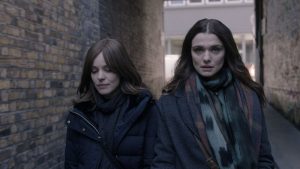 You know where this is going and things get complicated especially when David agrees to let Ronit stay with Esti and him. Ronit leaving has as much to do with the fact that she didn’t want to live under Jewish orthodoxy rules as with her found out relationship with another woman, though it amounts to the same thing. Esti chose to stay but was she given much of a choice? The film doesn’t get too deep in the weeds about the religious aspect of orthodox judaism and that’s probably for the best. The focus is kept on the women, their relationship and their choices or lack thereof. 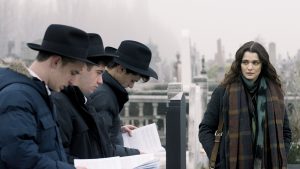 The film felt like a late 70s, early 80s film, one I would have seen on the Z Channel* growing up. The score by Matthew Herbert is very effective, strange and beautiful. It’s refreshing to see a film that doesn’t come with a soundtrack album with all the apropos recent hits on it, though it does make good use of an oldie but goodie by The Cure which fits the story and the scene and isn’t just laid over a montage.

The film doesn’t build up to the conclusion I expected. It was very even handed and understated. Perhaps I’m just so used to over the top histrionics that I am shocked when things don’t combust at the end of every film. Still, I would have liked a little more fireworks.

The performances are terrific. Rachel Weisz (who also produced) handles a lot of conflicted emotions wonderfully, so expressive. Rachel McAdams matches her scene for scene. Alessandro Nivola is so good. I have been an admirer of his work in film (Laurel Canyon) and on stage (A Lie Of The Mind) for a long time. The movie will probably disappear from theaters soon as they make way for all the Summer blockbusters but look for it on Netflix and On Demand, open a bottle of wine and you may find it an enjoyable watch one night.