WESTWORLD RECAP S2EP4 THE RIDDLE OF THE SPHINX 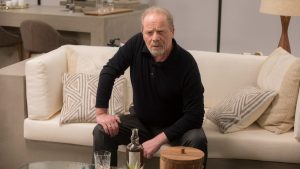 “You live only as long as the last person who remembers you.” Ghost Nation Indian

The opening of this episode kind of reminded me of the the season two premiere episode of LOST where we see Desmond in the Hatch going through his daily routine. Here we see James Delos doing his daily routine in a lovely apartment while listening to The Rolling Stones Play With Fire on the turntable.

He is visited by younger William so we know this is long past. The scene ends early with William putting a document down on the table for Delos to look at. 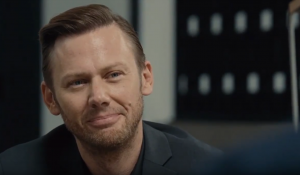 We keep coming back to this scene only at different times in the past until the William that comes to visit hm becomes the William of the present. It turns out the main reason Delos invested in the park from the beginning was in the hope of living forever. Since his death they have been trying to transfer his essence, his mind into a host body made from his DNA. The document was the script of their conversation that had been programmed for him. Each time they have tried the Delos Host malfunctions and they burn him and the entire room to a cinder. Why? Why not just shut the Delos Host down and reuse the apartment?

On William’s final visit to the Delos Host he tells him that his wife is dead, Logan overdosed years ago, his daughter, and William’s wife, committed suicide. The latest version represented the 149th time they tried to revive him and has lasted 35 days before malfunctioning and that one day, in a couple more years they might get it right. But they’re not going to keep trying to perfect Delos as no one is around that remembers him anyway and the memory of him is better than he ever was in reality.

“The world is better off without you Jim and possibly without me” William says.

This time, however, William tells he tech not to burn the room and allow the Delos Host decay and study it.

The timeline indicates that this last visit happened just before William returns to Westworld for the last time, in the series premiere.

Meanwhile, back to the past, two weeks in the past, William and Lawrence arrive in Lawrence’s hometown to be greeted by Major Craddock and the other confederados that Teddy allowed to escape. They want the weapons they know are hidden in the town. Lawrence tells MIB where they are and MIB immediately tells Craddock in an attempt to make a deal to be allowed to go. Well Craddock and his men are animals and like to kill people for fun. When Craddock decides to have some fun with Lawrence’s wife it triggers something in MIB. Craddock starts dancing with the wife just like MIB did in Season 1 right before he coldly killed her. This time, MIB seems to have sympathy for her. he flashes to finding his wife dead in the bathtub. He decides to stop Craddock and kills him and his men. 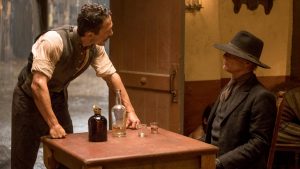 As he prepares to move on, Lawrence and some of his cousins offer to go along as thanks for saving their lives. Lawrence’s daughter, channeling Ford, I assume, speaks to William.

“They may not remember but I know who you are, William. One good deed doesn’t change that. And you still don’t understand the real game we’re playing here. If you’re looking forward then you’re looking in the wrong direction” 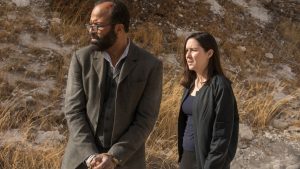 Clementine drags Bernard to a cave and leaves him to find a still alive Elsie! Bernard hadn’t killed her but just left her manacled in the cave with some energy bars and a bucket! She’s understandably pissed. But she doesn’t kill him and instead Bernard reveals to her that he is a host.

Good question. Did Ford just put him in storage? Or is that when he worked on secret projects, secret even to him. This may be the case as Bernard remembers a secret lab within the cave. They did several lab techs dead as well as some drone host. One was still alive but Elsie kills it. Bernard keeps having pieces of memories coming back to him. 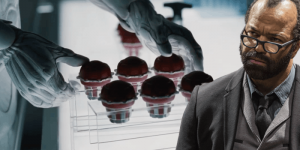 “I’ve been here recently.” he says, “They weren’t building host, not exactly”

They hear a noise coming from behind a locked door. When they break in they find the Delos Host and his glass booth apartment. The place is bathed in red light, the lab tech is dead and Delos is on his exercise bike, still running through his program. He’s gone made, though, his face all cut up from self inflicted wounds. Elsie is unable to kill him so Bernard steps in to keep Delos from killing Elsie.

Elsie executes the termination program that sets the room on fire. Obviously, representing hell. Bernard remembers Ford sent him there to print a control unit for another human. Who? Ford? 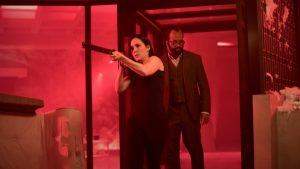 He also remembers having the drone hosts kill the techs then snapping their own necks, save for the one Elsie kills. Bernard also finished off one of the techs himself with a nasty ‘curb stomp’. he doesn’t share this info with Elsie, of course. 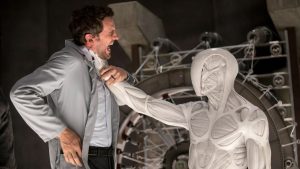 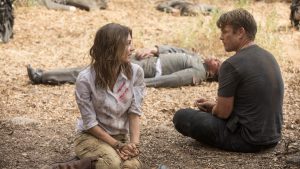 The woman we met last week who had the tussle with the bengal tiger is back. She’s been captured by members of the Ghost Nation who also have Stubbs and several other guests. Stubbs tells her that help is on the way but she is not waiting around. She also tells him she doesn’t want to get out of the park. as I suspected, she has a plan of her own. When they are all brought before ‘the first of their kind” she makes a run for it. It seemed too easy but then the head of the tribe whispers in Stubbs ear, “You live only as long as the last person who remembers you.” and all the indians disappear. It seemed like part of Ford’s game was to allow her to escape.

As MIB, Lawrence and his cousins ride across the prairie they see someone riding towards them, a woman, the woman who just escaped the indian party. And just as I called it! She’s MIB’s daughter!, Emily!

The host that was the head of Ghost Nation is also the host that met with Logan and introduced him to Angela in the season premiere. You also noticed that Major Craddock was at that cocktail party demonstration as well. 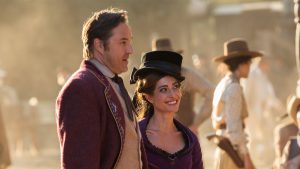 The husband and wife prisoners that were shown with Emily as guests from episode one! He actually became a hero by killing Hector during their safe robbery.

Great scene having Major Craddock force fed some nitro and Lawrence shooting him and blowing him up! 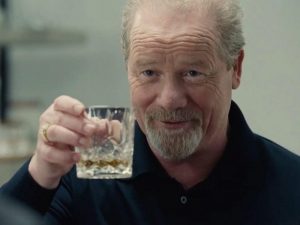 Loved James Delos (Peter Mullan) performance in this episode and especially his dancing!  Nice one! 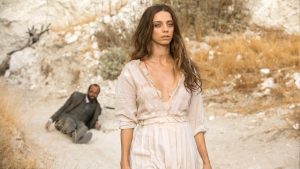