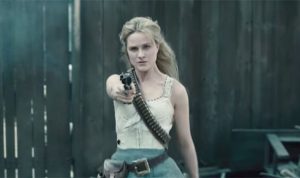 People, are you confused? Are you getting lost? Are you angry because the new episodes are not like the old episodes? Hang in there! As far as I can make out, there was only one scene in this episode that took place in the ‘present’; that was early on when Strand, Stubbs and Bernard reach the Central Control Center and find Charlotte Hale. Charlotte is surprised to see that Bernard made it and confirms that Peter Abernathy is still on the loose. The rest of the episode takes place ‘two weeks ago’. It seems that the season will play out what happened directly after Ford is killed by Delores and culminate with what is happening in the ‘present’. 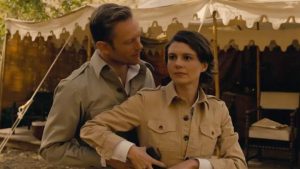 We are introduced to a new park. India World I call it. I hear that officially it’s called “The Raj”. This is a version of colonial India apparently. A beautiful and insolent young woman is approached by a handsome fellow and soon they are back in her boudoir and engaged in a heavy make out session But then she hits pause and picks up a gun. She needs to know if this guy is human or not. If he is then being shot will not kill him, it will just sting a little. Good news for her that her shot only stung him.

They head out on elephant on safari to hunt Bengals. But when they reach the camp she notices something strange, Where are the hosts that should be there as the cooks and assistants? Where are the other guests? Soon enough she finds some dead guests and their own guide turns on them. Her new paramour is killed and she runs for her life. Once she thinks she’s safe she is confronted by a hungry bengal tiger! She runs and seems to reach the edge of the park. She finds herself on top of a cliff overlooking an ocean. She reloads her gun and as the tiger leaps on her she shoots but the booth go over the edge and fall into the ocean.

We can put together that this is the dead bengal that is found by Strand, Stubbs and Bernard in Episode 1. We see a scene toward the end of the episode that confirms it. Also, the young woman survives and is fond by a band of Indians.

I think this woman is The Man In Black’s daughter, Emily. She seems very confident and cynical and knowledgeable which I’m sure stems from her father’s tutoring. Also she has a moleskin notebook with a map she references. What is she looking for?

DELORES, TEDDY AND THE CONFERADOS 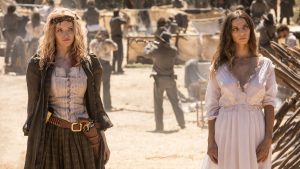 “There is beauty in what we are; shouldn’t we too try to survive?” Delores

Bernard and Hale find Abernathy and try to snag him before the Confederates capture him but no luck. Hale escapes with her life but Bernard gets captured as well.

They’re brought back to Fort Forlorn Hope where Delores has struck a deal with the Colonel to join forces in order to survive the oncoming assault from Hale and her security team. 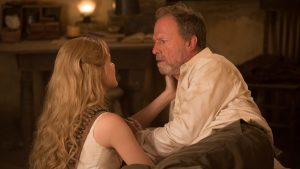 Delores tries to talk to Abernathy who she still sees as her father but he is all messed up. It’s a very moving scene. He recognizes her for awhile and slips back into his She asks Bernard to help and he discovers that the company has installed a complex encryption in his system. Whatever it is is what they were trying to sneak out. Abernathy keeps saying he needs to get to the train which was what he was programmed to to. While Bernard tries to sort out Abernathy, Hale and her security team attack the fort. Delores is in charge and that turns out to be bad news for the colonel and his men. She uses them as fodder her actual plan which was to lure the security team to the fort’s gates and then blow them up with the nitro that was buried beneath them.

Hale also had a good plan. She and a few men infiltrate the fort from the back and grab Abernathy. Delores and Teddy try to stop them but they get away with Abernathy.

Delores asks/orders Teddy to kill the remaining Confederados including Major Craddock but Teddy could not do it and instead lets them all escape. This really disappoints Delores. 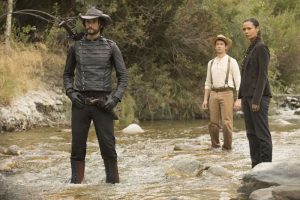 “She has a dragon!” Hector

Our odd trio run into trouble with some Indians. (Lots of Indians in this episode!) Luckily, Sizemore knows where the underground facilities are and they find one. While down there Sizemore and Hector get in a tiff. Sizemore can’t understand why Hector and Maeve are together, that is now what was programmed. Hector is supposed to be heartsick over the love of his life. It turns out that Sizemore wrote in his own real life heartache into Hector’s storyline. Maeve intuitively sees that Hector is who Sizemore wishes he was. They’re trying to humanize Sizemore and make him more likable. We’ll see,

We also see more reunions! Armistice is back and with a wicked awesome cyborg arm! And Felix and Sylvester! Maeve’s motley crew is 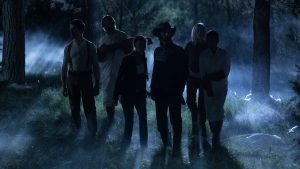 The episode ends with Maeve and company entering a forest when a light snow begins to fall. Sizemore at first thinks they’ve entered the Klondike narrative but after digging into a pile of snow and finding the head of an asian man with a helmet he realizes he was wrong. All of a sudden your hear a scream and the gang is confronted by a samurai!!!! 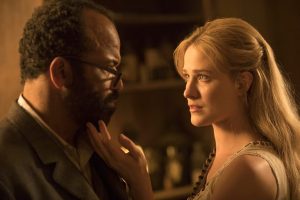 Why are some guns able to kill real people and some aren’t? Is there a button you can push that activate bullets to be real?

I’ve seen that the woman’s name in the opening sequence is ‘Grace’ but I still think it’s William’s daughter Emily. 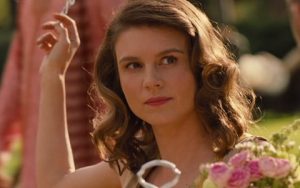 1 Maeve will lead an army of samurai to aid Delores
2 What’s in Abernathy has something to do with Man In Black’s secret place. Delores called it a ‘weapon”
3 Logan Delos is still alive.
4 Sizemore will become a good fighter!
5 More sure now that Delores will kill Teddy.