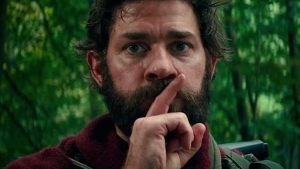 I am not a big horror film fan. I never got into Halloween or Friday the 13th or Saw or those type of films. But a well done horror film like Alien (1979), The Exorcist (1973) or the more recent The Witch (2015) I enjoy very much. A Quiet Place co-written and directed by John Krasinski is an excellent thriller that is filled with tension and horror from beginning to end. 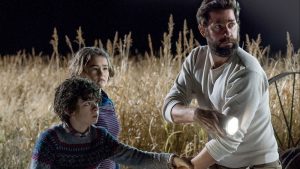 The characters have no names. They are just a man (Krasinksi), his wife (Emily Blunt) and their three young children, two boys and a girl. They are scavenging a grocery store when we first see them. They are careful not to make a sound. Something awful has happened and they seem to be survivors but we don’t know of what. They seem to have been living this way for some time as they are all very cautious. On their way back home you find out why. This is the first five minutes and you don’t relax again to credits roll. It’s refreshing to watch a film that can tell its story in almost complete silence. You want noise? Go see a Marvel film! 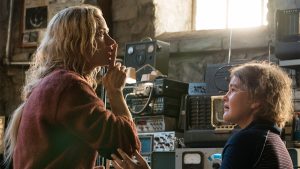 I can’t remember seeing anything like this before. The only thing I can think of is a Twilight Zone episode called The Invaders which has a silent woman being terrified by a spaceship that has landed in her attic. But even this example is nothing close to what A Quiet Place does. 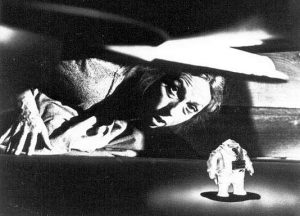 Sure there have been variations of apocalyptic stories and survivors trying to stay alive but this one felt new. It helps that the performances were so good. Krasinski and Blunt are married in real life and they have an easy chemistry onscreen. Blunt really delivers a powerful performance as she must endure some pretty intense situations without making a sound. The child actors are also very real and powerful especially the girl played by Millicent Simmonds, who is deaf in real life. They all use sign language to communicate and the quiet and stillness really works to heighten the tension. Krasinkski has crafted a bona fide instant classic and also a box office hit. A sequel is most certainly on the way.