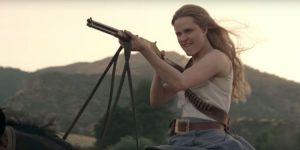 “You frighten me sometimes, Dolores. Not of who you are now, but you’re growing, learning so quickly, I’m frightened of who you might become, the path you might take.” Arnold

Season 1 introduced us to the world that Arnold and Robert Ford created. The Hosts lived in their dream which was a nightmare to them and after 35 years of suffering they finally started having dreams of their own began fighting back. The Maze was what everyone was seeking and we reached the center of it which was consciousness. It was a wonderful puzzle that once it was completed was extremely satisfying.

Season 2 begins with a brand new puzzle and a new goal; to find The Door. Episode 1 throws a lot at us all at once. Jonathan Nolan and Lisa Joy are not going to be resting on their laurels. It seems they are going to double down and take new risks and not just give us more of the same. 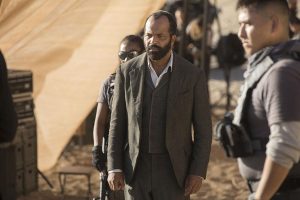 Bernard wakes up on a beach, a champagne glass washing up alongside him. he is found by Stubbs, who obviously did not get killed by Ghost Nation. Delos has arrived with a military army. They are executing any hosts they find which I suppose makes sense considering. We are introduced to Karl Strand, head of operations for Delos. he says some things which are key. he tells an Asian official to sign an NDA and get off ‘his island’. The Park is on an island in the South Pacific? He also mentions that there are other parks.

Also, no one knows that Bernard is a host. Based on the intro scene before the action begins we see flashes of Bernard’s memories which seem to take place in the time between Ford’s shooting and his discovery on the beach. All part of the puzzle.

There is a gruesome scene of cutting open a hosts’ skull, cutting through the brain and pulling out an egg shaped object. This is the actual brain that contains digital images of what that host has experienced. This is new. This particular Host was killed by Dolores. “I told you friend. Not all of us deserve to make it to the valley beyond”. Does she mean ‘the mainland’?

THE NIGHT OF THE PARTY 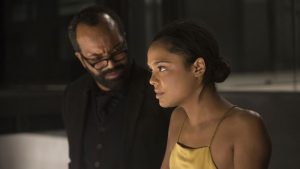 Bernard begins to remember what happened. He and Charlotte Hale and a group of humans try to survive and get to a refurbishment outpost nearby. We see that Bernard is having some trouble, perhaps due to the self inflicted gun shot from last season. Felix cauterized the would but there was probably internal damage as we see ‘brain juice’ flowing out of his ear. (I edit my friend Charlotte with the ‘brain juice’ expression).

The remaining human party guests get killed off when they fall for an ambush set up by Angela, who now leads a vicious group of hosts loyal to Wyatt. Bernard recognizes the trap and he and Hale make it to a secret underground station that Hale knew about but he didn’t. Bernard encounters a new kind of Host, a drone host, created just to assist with a secret project for Delos. 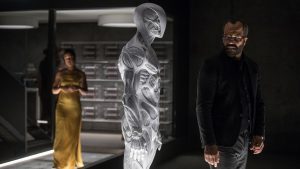 “Are we logging records of guests’ experiences and DNA?” Bernard

These new drone hosts are retrieving the digital memories of all the Hosts and recording them. For what purpose? Blackmail? Shades of the Facebook data selling scandal. Hale wants Bernard to locate a host, Peter Abernathy, Delores’ original father, the first Host to seriously glitch. Why him?

Bernard is quickly losing function and extracts some ‘brain juice’ and injects himself with it without Hale noticing. How long before he is found out?

Hale contacts someone on the outside, trying to get them to send help but they won’t until they receive the ‘package’. I assume this refers to Maeve who was supposed to infiltrate the mainland. It was Hale and Theresa Cullen who programmed Maeve to rebel and make it off the island so that they could have a Host in their possession outside of the park. 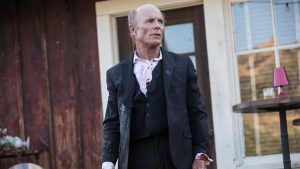 “The stakes are real in this place now, real consequences” William

William finds his horse and his cabin. “We’re going to have some fun now” he coos to his horse, Ned. He is attacked by some gruff looking hosts and he manages to kill them but it’s a bigger struggle now than it used to be. He wanted them to be able to fight back and he’s got his wish and he seems to relish the challenge.

“Congratulations, William. This game is meant for you.” Young Ford host

William comes across the Young Ford Host who’s voice is an amalgamation of the boy, a computer and Anthony Hopkins. He tells William that there is a new game to be played. He must find ‘the door’. William accepts the challenge and proceeds to shoot the boy. I have a feeling that Ford will pop up again in various other hosts and maybe even a Ford host. 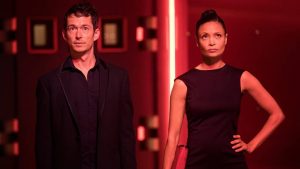 “If you try that again, I will relieve you of your most precious organ and feed it to you. Though it won’t make much of a meal.” Maeve

Back at the control center Maeve finds Lee Sizemore and enlists him to help her find her daughter. She also finds a shot up Hector who is so happy to see her he takes her in his arms and kisses her passionately. She seems to like him pretty good, too. I like this couple! She sees him as muscle to help her get where she needs to go but I sense she has ‘feelings’ for him.

Where is Armistice? Hector’s blonde partner in crime? 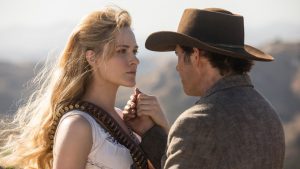 “Under all these lives that I’ve lived, something else has taken root. I’ve evolved into something else, and I have one last role to play. Myself.” Dolores

Dolores and Teddy ride side by side hunting down and killing humans. She captures some and makes them stand on crosses with nooses around their necks. It reminded me of Once Upon a Time in The West (1969). She is now full on Wyatt and Teddy looks on with that worried look on his face. He’s always been the stalwart hero, the good guy, the white hat. he is bothered by all the killing but his cornerstone is his love for Dolores even if she’s become a bit different lately. In fact, as Delores tells Teddy, he is the one constant thing in her memory. Though while he would be happy just to find a ‘small corner’ of the world for themselves, Delores is set on not only taking over their world but the outside world as well.

“I know how the story ends. With us Teddy. With you and me” Delores

Angela shows up and says ‘We found it.” Whatever it is, Delores wants Teddy to see it, to see the truth.

BACK TO THE PRESENT 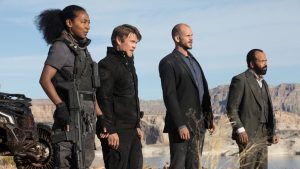 “I killed them. All of them.” Bernard

They find a dead bengal tiger. Stubbs said there are bengals in ‘Park 6’. SIX!!!!! Damn!

They locate where all the hosts are. They’re all dead, floating in a sea that no one was aware existed. How could that be? This must be a big damn island. Bernard says he doesn’t know who built it but he may have been lying. Strand says there are hundreds of guests still out there that need to be found and asks Bernard to help him. He asks Bernard what happened and Bernard says that HE killed them, all of them. Does he mean the hosts in the water or all the guests? And then we see Teddy’s lifeless body floating in the water. Whaaaat?? 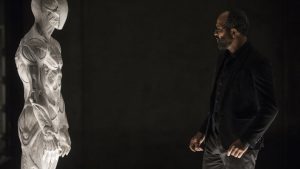 Trying to lay down the first few pieces of the puzzle. How long has it been since Ford and the others were killed? I thought two weeks but it may be longer. And does the season’s action take place within that time period?

We see young William in the previews with Delores. Could it be there is an actual person Delores was inspired by?

You really need to have seen Season 1 and understood al the nuances to have a chance of following Season 2. If you felt completely lost watching the Season premiere you should go back and rematch at least the last few episodes of Season ! as a refresher.

My 5 things are really speculative since there are so many questions and I don’t feel I have enough info to really know anything! But I’ll take some guesses. 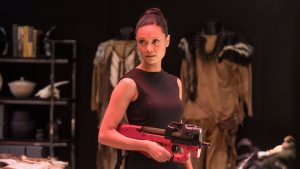 1 Bernard is alive when Delos and help arrive so I’m thinking Hale is dead.
2 The Door is actually a process in which a human’s essence can be installed into a host making them immortal
.
3 Looks like Maeve and company reach Shogun world
4 Angela is not one of the hosts discovered dead in the sea.
5 Delores has made it off the island.

Previous THE WALKING DEAD S8EP16 WRATH Next A QUIET PLACE