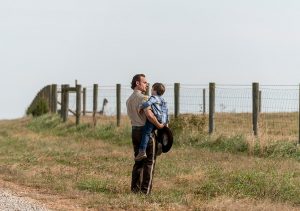 “What’s left of the people we lose is their ideas.” Sadiq

Well, they said the battle with Negan would end this season and they weren’t kidding! But I’m sure many fans will be disappointed. I was. But not for the same reasons that you may be.

The episode starts with Rick asking Sadiq for the details of how Carl died. If I were him I wouldn’t have been comforted with his answer. Morgan is crazier than ever! He tries to attack the men coming back into Hilltop but is stopped by Carol and little Henry who Morgan almost skewers! Rick tries to tell him he doesn’t have to come with them for the big battle but Morgan insists.

“We are worse than we are, you and I.” Morgan tells him. It’s true. But I wouldn’t want that crazy bastard with me on such an important mission.

I loved seeing Rick and Michonne walking into battle hand in hand as the group left Hilltop.

Dwight is now in prisoner garb; sweatshirt with a big orange “A” on it. Eugene has completed the requested bullet oder. Negan asks ‘Gabey’ to ride along with him because he has some sins to confess.

Rick and gang knock off some Saviors setting up a roadblock using some walkers. Morgan mercilessly kills off one of them trying to surrender. He sees the ghost of Jared taunting him as usual. Is he going to keep seeing dead people when he is on Fear TWD?

But it’s another red herring – Negan sacrificed them so that Rick would find a map showing where Negan would be. Oh! All the misdirection! Father Gabriel decides he’s heard enough and jumps out of the moving car!!! He’s quickly caught because he’s blind and can’t keep from running into trees and walkers.

Meanwhile. Rick and his party are marching. Jesus has a little friendly talk with Morgan and gives him a bit of sound advice about how to try and regain his balance. Move from crazy to less crazy by using his beloved staff.

“This end for the dead (sharp end) and this end (blunt end) for the living and things will start to get better.”

Then they started hearing that creepy whistling. The Savior’s theme song, if you will. 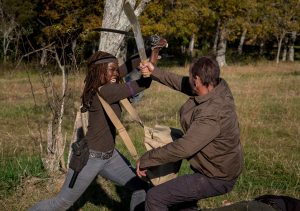 “I ambushed your ambush with an even bigger ambush!” Negan announces on his bullhorn.

All of a sudden Rick and company find themselves surrounded! But when they shoot their weapons they all misfire and most of them are wounded or killed. That’s when Rick attacks! It’s pretty easy at this point. Michonne cuts down one, Rosita saves Eugene. Morgan even avoids killing a helpless Savior and at Jesus’ urging using the blunt end of his stick. Let the healing begin.

While the remaining Saviors surrender Rick chases Negan down to the tree with stain glass hanging off it for some reason. They fight it out but as usual, Rick gets his ass kicked again. He sure can take a beating. Remember The Governor just about beat him to death and it was Michonne that saved him. 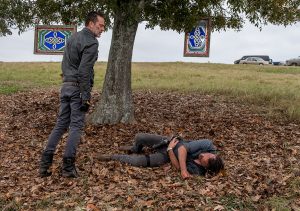 “Just so you know, eeny meeny miney moe? That was bullshit. I made a choice. I just didn’t want to kill a kid’s dad in front of him. But maybe that would have been the best thing I ever done. had I done it that might still be alive” Negan tells Rick. That had to hurt. But instead of getting up and continuing to fight, Rick pleads with him to listen. They can stop the fighting. He asks for 10 seconds for Carl. Negan gives it to him. And lo and behold it works! Negan starts to cry. And then Rick slices his throat open. He felt guilty about it though after saying how Carl wanted them to make peace and all. He turns and sees everyone standing there watching. 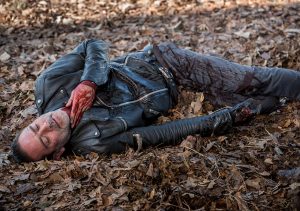 “Save him!” Rick shouts and Sadiq rushes to Negan’s aid. Well this did not make the Widow Maggie very happy. Michonne had to hold her back while she wailed, “NOOOO! We have to make it right! It’s not over until he’s dead!”

Rick tells the surviving Saviors to put their hands down and go home. The real enemy is the Dead. 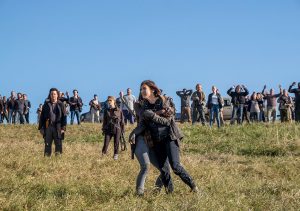 “Negan’s alive but his way of doing things is over!” Rick tells the surviving Saviors. “All this is just what was. There’s got to be something after”

Rosita punches Eugene. “That’s for the puke”
Morgan hands over his armor to Carol to give to Henry and tells her he’s moving on. (Moving to another show that is)

Then we see that scene of Rick that we saw in the season opener but didn’t understand where or when it would come into play. Rick sits against the tree with the hanging stain glass and weeps.
“My mercy prevails over my wrath”

Another group of Saviors arrives at Hilltop but a plan was ready. Tara led everyone into the woods to hide. That damn baby Grace can be heard for miles! She plans to slow down the bad guys and the sweet Savior turncoat offers to help. She hesitates but then hands him the bag of guns and a small group of guys arm themselves. But they their help wan’t needed! All of a sudden those Saviors started going up in a ball of flames! It was Aaron and the Oceanside gals tossing molotov cocktails!!! We all saw that coming, didn’t we? 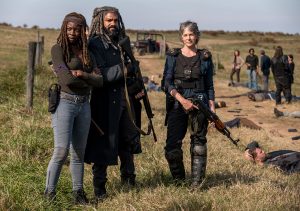 The sweet savior asks Maggie if he could stay. He’s been reading the book A Key To A Future and wants to try to build some of those contraptions and make Hilltop stronger. Maggie gives him the OK. 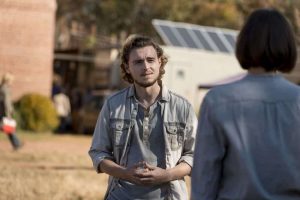 Rosita and Tara go to The Sanctuary and plan to help the Saviors build a decent community there. They’re greeted by Negan’s wives! I guess they’re considered divorced now. They might want to leave that moat of zombies though.

Daryl drives Dwight out into the woods. Dwight thinks he’s going to be executed and says he’s sorry for killing Denise and is willing to accept his fate. But Daryl lets him live and tells him to go away and never return.

“You go out there and make it right. Find her!” Daryl tells him.

He drives off to the house where he and Sherry were supposed to meet and finds a note there with some beer that says “Honeymoon”. I guess she’s still around?

Morgan shows up at the junkyard and tells Jadis that she’s welcomed at Hilltop. She tells him her real name. It’s Ann! Morgan says he’s going to stay at the junkyard because he needs to be alone.

Carol goes with King Ezekiel and Jerry back to The Kingdom to rebuild that place. 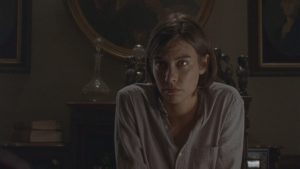 Then we get to Maggie. She tells Jesus he was right not to kill those Saviors at the outpost and that Rick was right not to kill the Saviors at the end of the battle. But she was not OK with leaving Negan alive. “We have to build this place up. Make it work better than before. We need our strength. The ability to defend ourselves better. We have to have that. But Rick and Michonne. Rick was wrong to do what he did. Michonne too. So we’re going to bide our time, wait for our moment and then we’re going to show him”

Then Daryl appears from the shadows!

What the hell? They’re going to turn on Rick? That is crazy talk!! 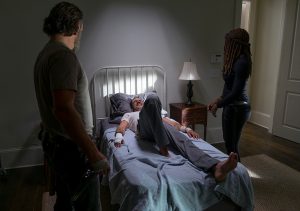 Rick and Michonne tell Negan what they’re going to do with him.

“We’re not gonna kill you, we’re not gonna hurt you. You’re gonna rot in a cell.” Rick tells him. They want him to watch them build a better community and for people to see what happens to bad people. So either he will get loose one day and start trouble again or he may change and be an ally in the future. I always thought it would be fun to see Negan and Rick become friends!

Then there’s Gabey, I mean Father Gabriel who prays in his burned down church and says he can see. But I think he means ‘see’ in the spiritual sense. I think he’s still blind.

Then we see young Rick walking with a tiny little Carl walking along the road. He honored Carl’s vision. He’s going to try and build the world Carl wanted him to. 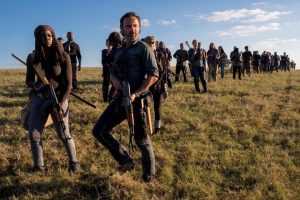 I have to say the finale felt anti-climactic. The Big Battle didn’t happen. Thanks to Eugene. And there were no losses. perhaps that was the twist but it wasn’t a satisfying one. Every character did have a revelation and that was interesting but it did not make this a great finale.

What is set up does make me interested in next season. There will probably be a time jump and I’m curious to see how bad Maggie, Jesus and Daryl become.

I figure there will be a new threat to our heroes and Rick will turn to an imprisoned Negan for help. I think these two will make a great team!

Well that’s it, folks! Now it’s on to Fear TWD! And Westworld!

Great Lines From The Episode

“Sorry, Eugene. I’m going to have to call dibs on Gabey boy myself!” Negan

“I created a modicum of phooey for a full kablooey” Eugene